Beyond the prototype: Enabling the long tail of hardware devices

Hardware is important, but it’s hard

More than ever before, our society depends on an array of interactive devices. We need to provide input to computer systems throughout our day, whether at home, at work, or on the move. And the same computer systems often provide feedback, for example via displays or automated controls. This input and output is enabled by a growing range of devices: from networked light switches and voice-activated headsets to home heating and factory control systems. Developing and deploying innovative hardware with new forms and functions is vital to the continued adoption of smart, connected systems.

Unfortunately, introducing a new hardware product into the market is so expensive that it’s often only feasible for products that have the potential to be high-volume blockbusters. In addition to development costs, substantial expenditure is associated with sourcing raw materials and preparing a factory for manufacturing. These fixed, up-front costs can only be justified for a product that will sell in large numbers—reducing product innovation and variety. This also makes it hard for small companies to operate in the ecosystem at all.

Our vision is a world where low-volume manufacturing is much easier. Rather than relying on economies of scale, we believe that innovations in the design and manufacturing process can improve the efficiency and thereby reduce the cost of small-batch manufacturing. This would empower both experienced hardware developers and relative newcomers to produce innovative interactive and embedded devices. But more importantly, it would unlock the potential of small-scale hardware devices, allowing more hardware ideas to become reality, driving innovation and increasing consumer choice.

We’ve just published a new paper, “Beyond the Prototype: Understanding the Challenge of Scaling Hardware Production,” that describes the difficulties of taking new hardware devices to market and presents some opportunities to ease the problems of low-volume manufacturing. This work was a collaboration with Rushil Khurana and received a Best Paper Award at the ACM CHI 2020 Conference. It forms part of an on-going initiative at Microsoft Research called

A good way to compare the relative popularity of different products within a market is to plot a graph. The y-axis signifies the sales volume of each different product while the x-axis represents product rank; the most popular product (rank = 1) is plotted first, then the second most popular (rank = 2) and so on. This is called a rank frequency distribution, and for a lot of markets it’s exactly the same shape, as shown in the animated figure above. In these markets, a few “blockbuster” products make up one half of total sales, while the other half consists of a great many different “niche” products that each sell in much smaller quantities—the so-called “long tail.”

The long tail is valuable in two senses. First, because it represents half of all products in a given market, it embodies a worthwhile commercial opportunity. But more importantly, because it contains a much bigger variety of products than the “short head” of blockbuster products, it allows users to choose products that are much more tailored to their particular wants and needs. Unfortunately, in some markets there is no long tail because it’s simply too hard to support the inherent variety—instead choice is limited to a small number of blockbuster products. This used to be the case for movies—cinemas only showed a relatively small number of films every year—but over the last twenty years online streaming services have unlocked the long tail in this market. For more information on the challenges of long-tail hardware, an earlier paper introducing the subject is a great place to start.

Today’s process for realizing new hardware can broadly be split into two phases:

Phase 1: A period of ideation, feasibility testing, design, and development leads to a new device concept and ultimately a basic working prototype.
Phase 2: Fruitful concepts undergo a process of design refinement followed by an extensive period of production engineering, ultimately resulting in hundreds to hundreds-of-thousands of units.

The hardware device research community and the industry it serves have developed many sophisticated design and prototyping tools and techniques to aid in Phase 1 above. Collectively, these on-going innovations mean that experts can build all manner of interactive and embedded hardware prototypes quickly and cheaply. At the same time, non-experts are empowered to work in this space. Even high school students exploring the field can design and build innovative and useful devices by combining an off-the-shelf microcontroller board, some external components, and a 3D-printed enclosure. This has led to a surge in hobbyists and tinkerers who are able to build a handful of units, either for personal use or to begin a commercial enterprise.

However, we haven’t seen the same kinds of advances in Phase 2, making it remarkably hard for small organizations to transition from a prototype to a product. Large device companies have carefully optimized manufacturing facilities and processes that allow them to mass produce high-quality, keenly priced devices in volumes of upwards of 100,000 units a year. But without an up-front commitment to these high volumes, a new device needs to go through a period of much lower volume production. This introduces a significant hurdle.

Initially, up to hundreds of samples of the device are needed for evaluation, and if it’s successful, the device must then prove itself in the market as a fully-fledged but initially low-volume product. Without scale, it is hard to justify up-front costs, to have sufficient leverage over suppliers, and to cover fixed overheads. In addition, newcomers to the product development process experience many unexpected and unintuitive challenges. Collectively, these issues make the transition from a few working prototypes in Phase 1 to viable low-volume production in Phase 2 difficult.

The challenges of low-volume production and how to overcome them

In order to better understand the common difficulties faced by small companies during both phases of hardware development, we conducted semi-structured interviews with 25 practitioners who have experience building devices in low volumes. Our aim was not only to develop a balanced picture of the challenges, but also to uncover potential opportunities to reduce barriers and ease the prototype-to-product transition.

Each of our interviews lasted an hour on average, and most were conducted remotely using video or audio teleconferencing. We asked participants to talk through their journey from conception to productization, occasionally prompting them using a small number of pre-planned questions as probes to dive deeper into certain topics.

Four major themes related to successful low-volume manufacturing emerged, and we also identified a fifth category of difficulties based on anecdotes related to specific practicalities reported by many practitioners:

In addition to highlighting these five areas of difficulty, talking to practitioners also led us to conclude that there are some natural opportunities. We have grouped these into five main categories as depicted below. For example, many of the gaps in knowledge that were highlighted during our interviews could be mitigated with better documentation about hardware development processes and best practices. Similarly, new tools that support some of these best practices, for example version control and project management, would facilitate the rigor necessary for success in hardware production. 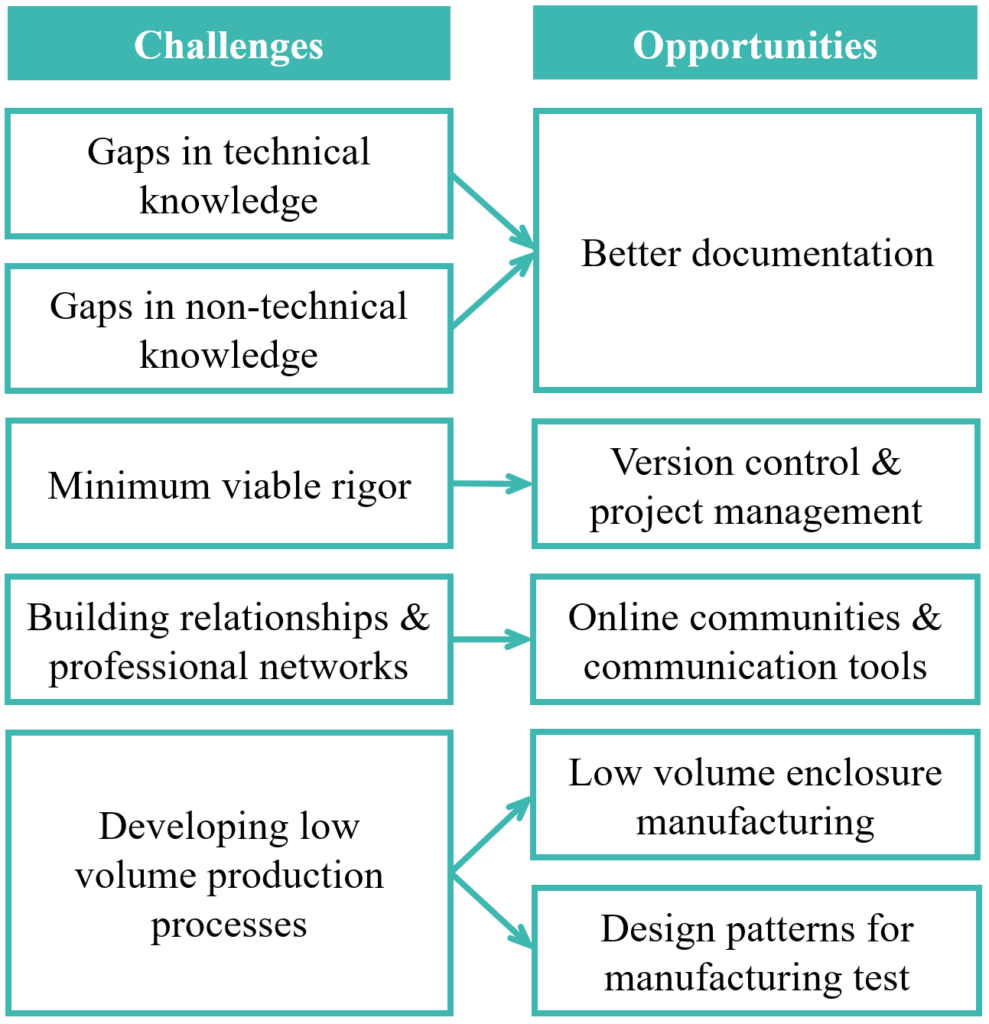 Rushil has a great online video that describes the challenges and opportunities uncovered during our research in more detail.

Taking our vision for scaling hardware from research to reality

We started this research knowing that in the past decade it has become much easier to design and build a prototype of a hardware device. However, many factors not relevant at the prototype stage conspire to challenge scaling up to the production of hundreds or thousands of units. Even seasoned players who know the pitfalls struggle to manufacture cost effectively at low volumes due to up-front production costs and reliance on other partners.

Collectively, the practitioners we interviewed have amassed a great deal of knowledge concerning the constraints of low-volume manufacturing. While some of the issues they reported may seem straightforward to the uninitiated, in reality the issues are significant pitfalls that persist today. The themes that emerged from our interviews naturally point to a number of opportunities to improve the status quo for low-volume hardware production. We see opportunities for new tools and resources that reduce the cost and friction associated with key activities in the transition from prototype to product. Examples include better hardware version control, project management, enclosure manufacturing, and manufacturing test. We hope that the community will join us as we continue our research in this domain.

As mentioned above, our vision is a world where low-volume manufacturing is commonplace. Instead of relying on the economies of scale enjoyed in high-volume manufacturing, we believe that innovations in the way people create products can provide resourceful ways to make small-batch manufacturing more efficient and thereby cost effective. We hope to empower both experienced hardware developers and relative novices to turn their prototypes of interactive and embedded devices into viable low-volume products. Ultimately, we would like to unlock the long tail of hardware devices, driving innovation and increasing choice. 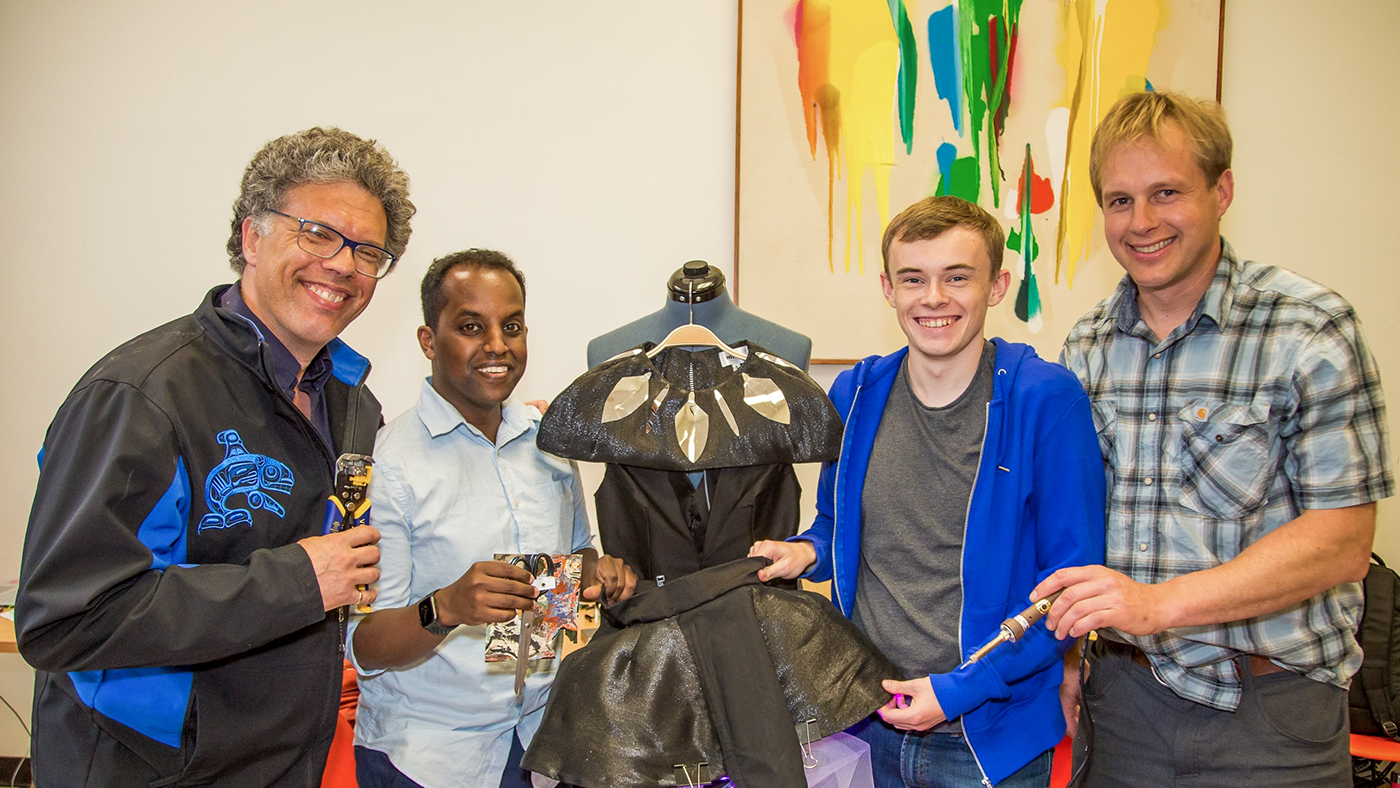 In his work in visual merchandising, designer Kenroy Tyrell has used LED lights in displays for trade shows and showrooms. But on this particular day, he found himself using the technology in a way he never anticipated—as part of a garment he had created. Tyrell was one of 20 participants in the Brooklyn Public Library’s […] 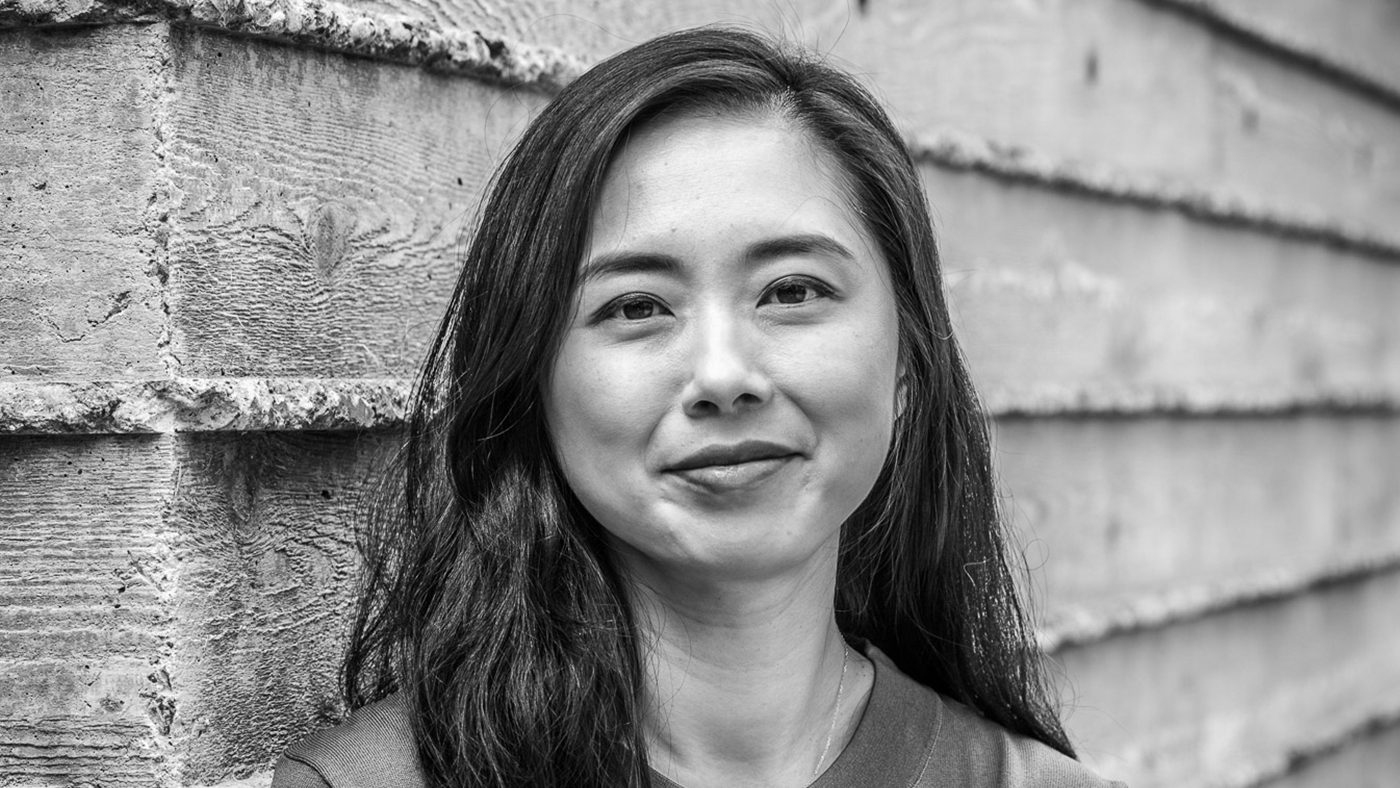 Putting the “human” in human computer interaction with Haiyan Zhang

Episode 62, February 6, 2019 - Haiyan talks about her unique “brain hack” approach to the human-centered design process, and discusses a wide range of projects, from the connected play experience of Zanzibar, to Fizzyo, which turns laborious breathing exercises for children with cystic fibrosis into a video game, to Project Emma, an application of haptic vibration technology that, somewhat curiously, offsets the effects of tremors caused by Parkinson’s disease.

Encouraging developers and manufacturers to innovate with Eye Control

Eye Control is an exciting technology in Windows 10 that allows customers to use their eyes to control an on-screen mouse, keyboard and text-to-speech experience. This is a technology that empowers people with limited mobility such as people living with ALS. As part of the National Disability Employer Awareness Month (NDEAM), Microsoft’s CEO Satya Nadella […]

The hardware research and development communities have invested heavily in tools and materials that facilitate the design and prototyping of electronic devices. Numerous easy-to-access and easy-to-use tools have streamlined the prototyping of interactive and embedded devices for experts and led…

A research award for PhD students in computing related fields in their 3rd year or beyond at universities in EMEA.