“If I’m comfortable, I’m not growing”: The many careers of Hui Cheng Tan

For Hui Cheng, it didn’t matter exactly what she did, so long as it gave her the chance to contribute to society, make the world a fairer place and, most importantly, learn new things.

Today, as Director of Sales Excellence for One Commercial Partner at Microsoft Australia, that’s exactly what she does.

An early taste for learning

As the youngest of three, Hui Cheng remembers her mother raising the children almost single-handedly.

“The economics of our household made me an advocate for learning and growth,” she says. “By building my skills, I could help my mother and contribute more to the household.”

After school, Hui Cheng enrolled in an accounting and finance degree. By the time she graduated, she had secured a role with PwC in Singapore, which subsequently took her to the USA and Hong Kong.

But in 2004, when an opportunity arose to start a new revenue assurance team for Microsoft’s Asia Pacific Operations Centre, she applied right away. The role would make use of her existing consulting skills, while enabling her to build new capabilities.

Since starting that team, Hui Cheng has worked in many different parts of Microsoft’s business, from finance to operations to sales strategy. By 2019, she was Commercial Finance Director for Microsoft Australia, sitting at the top of her game and putting her time-honed accounting skills to good use.

While Hui Cheng was happy, she began to crave a new challenge. “I always like to feel like I’m stretching, like I’m standing at the edge of a cliff and trying not to fall over,” she explains. “And if at any point in time I’m feeling too comfortable, then maybe I’m not growing as much.”

So, she decided to change gears and in late 2019, became Director of One Commercial Partner’s Sales Excellence team.

While Hui Cheng was confident that she could bring her strong management skills to this new role, sales strategy was a whole new game. “It was a hard decision,” she says. “Having built a career in finance, I was working with some of the best minds in the industry and I had really great senior sponsors. But I wanted to extend myself further and contribute in different ways.”

For the most part, Hui Cheng’s career trajectory has been upward. From manager to controller to director, her LinkedIn profile reads as a straightforward success story.

Even three periods of maternity leave didn’t slow Hui Cheng down. “Every time I returned, I always landed a more challenging portfolio,” she says.

There have been moments, however, when her path was more horizontal. “At times, in order to grow upwards, I felt I needed to grow sideways first. And the nature of the tech industry means there is always something new to learn.” 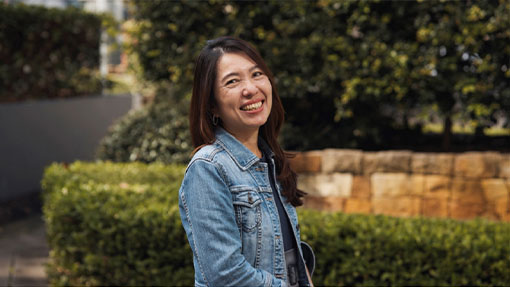 Hui Cheng’s passion for learning makes her a good fit for the Microsoft of 2021 – a company shaped by a ‘growth mindset’. This mindset, promoted by CEO Satya Nadella, encourages employees to focus on developing new skills rather than demonstrating their existing knowledge. It’s one reason why learning and growing is part of the fabric of life at Microsoft.

“There is never a dull moment,” says Hui Cheng. “On the sales team, I’m problem solving around how to grow the business, tackling execution challenges and coaching team members to help them achieve their goals. I’m constantly developing new skills.”

It’s been a similar story when it comes to formal learning.

Microsoft Australia employees are encouraged to reserve one day a month for any training courses or online classes they might be interested in, or simply to listen to podcasts and expand their knowledge on a subject of their choice.

And, over the past couple of years, Hui Cheng has been completing a leadership course at Harvard Business School. After travelling back and forth between Sydney and Boston in 2019, she studied remotely in 2020.

“It was a great experience being on campus, talking to some of the greatest minds in business,” she says.

Because the timing of Hui Cheng’s Harvard studies coincided with her move to sales, she finished the course with a different manager to the one she had when she began. Yet both leaders were consistent in their unwavering support for her continued learning.

And although it was the busiest time of year for Microsoft, Hui Cheng managed to transition to part-time hours to focus on completing her course. “I am so grateful because I know it took a lot,” she says.

The support didn’t just come from her managers. “My colleagues knew what my priorities were, and they knew both when to include me and when it was okay to figure something out without me.”

“I couldn’t have achieved it without the support of my peers, my team or my managers,” she reflects. “There’s no way any of us can achieve our career goals – or our life goals for that matter – in a vacuum. Every step that I’ve taken in my career is because someone believed in me.”

Hui Cheng’s family stepped up too. Her husband managed the housework while her teenage children began cooking meals for the family, even preparing a surprise dinner to celebrate Hui Cheng’s graduation.

“They had the whole menu planned out,” she says. “I was very grateful for that.”

While it’s a very different road to policing or teaching, Hui Cheng feels her life at Microsoft does fulfil the ambitions she set herself as a child. “I have the opportunity to articulate what I believe in and advocate for what is fair,” she says. “I still work with others, mentor others and have so many opportunities to give back.”

Most of all, Hui Cheng’s work gives her the freedom to grow and develop every day. “I am continually learning in each new role,” she says. “And that means when the next opportunity comes along, I’ll be ready and able to back myself in seizing it.”

“It was like being on a rocket ship, where my imagination was the only limit”.