“You’re in that room for a reason”: Lee-ann Dias on finding support, self-confidence and women in STEM

The resume of Lee-ann Dias paints a picture of a woman who is always seeking the next challenge.

Lee-ann’s career has spanned three countries, seen her present to some of the most powerful people in tech, all while staring down the stereotypes that often hamper career progression for women in STEM.

Not bad for someone who never thought she’d pursue a career in the industry.

Growing up in Goa, India, Lee-ann had two passions: computers and music. When she finished high school, she was given a choice between the two. Naturally, she chose both.

“I had an offer to join a music school after completing high school, which I almost accepted,” she remembers. “I was 90 per cent there, but then I realised I wanted to pursue my bachelor’s degree in computer science. So, as a compromise, I decided to start my own music school as well.”

While pursuing her computer science studies, Lee-ann continued to moonlight as a singer and run her music school. After completing her university course, she flew to Singapore to visit her parents and wait for her academic results. She intended to pursue a teaching degree and become a computer science lecturer.

A glimpse of a life in tech

In the absence her studies and her music, Lee-ann soon grew restless. To pass the time, she took a job in business development at ObTech Asia Pacific, an IT consulting company.

Lee-ann’s enthusiasm – coupled with her curious and analytical mindset – saw her being offered a consulting role, this time delivering customer relationship management (CRM) solutions to the public sector. While it didn’t fit her original plan of becoming a computer science lecturer and part-time musician, Lee-ann found herself falling in love with the role.

“I started to realise the value technology provides the customers in terms of improving efficiencies and reducing cost,” says Lee-ann. “And that really fascinates me; making a difference to an organisation or an individual.”

Firmly on track towards a career as an IT consultant, Lee-ann’s father encouraged her to find a job at Microsoft – as he had – knowing she would receive the training and mentorship she was seeking. But she was intent on forging her own path.

Lee-ann had plans to travel to Spain, where she would learn flamenco guitar and Spanish cooking. But while planning her three-month sabbatical, a role opened up at Koorb Consulting, which would allow her to continue working with CRM solutions – this time in New Zealand.

“I was curious about new cultures and exploring new pastures,” she explains. “And the opportunity to keep doing what I was doing in a new country was great. So, I said, ‘Alright, let’s give this a go. It’s going to be an adventure.’”

Arriving in New Zealand was a shock for Lee-ann, more so than her move from India to Singapore.

The first obstacle wasn’t the language itself, but the pace at which it was spoken. She simply couldn’t understand why everyone raced through their sentences, and for the first week, Lee-ann had to ask her new colleagues to slow down when they spoke. 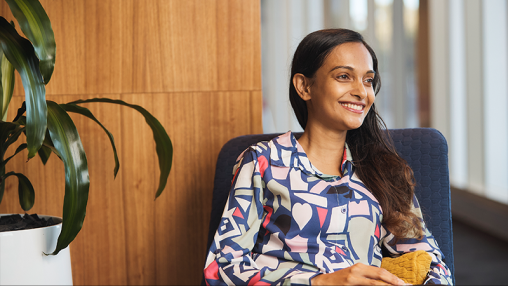 But soon Lee-ann found her feet, and once she did, there was no holding her back. For the next few years, she threw herself into her work and the new culture, absorbing everything New Zealand had to offer. But if one mindset has defined Lee-ann’s career, it’s the search for new opportunities and career growth. This ambition was one reason behind her decision to move to Australia. The other was closer to her heart. On her first business trip to Sydney, while riding the Manly ferry, Lee-ann met the man who would become her husband.

In Australia, Lee-ann began to see the gender disparity in tech, something she never had reason to notice before. Asia had made great strides in this area, but in Australia, Lee-ann was often the only woman in the room. While she wouldn’t describe this as a challenge, it did drive her to work harder and stand taller.

“People had an opinion of you before you even stepped into the room,” she says. “And then when you spoke, that opinion changed, but you had to work on it. You network and build your brand reputation, until eventually you silence the critics.”

It was this strength and self-belief that would inform the rest of Lee-ann’s career. The gender disparity in the IT industry became her motivation to take on more and greater challenges. Soon she was presenting at external events and taking on leadership roles at tech community meetups, at all times focused on achieving her career goals. So, when the opportunity to work at Microsoft Australia opened up, Lee-ann knew it was the natural choice.

Lee-ann knew Microsoft would give her an opportunity to drive impact at scale and work with some of the industry’s best minds. And she was right. Upon joining the team, she discovered no barriers to her success. She only had to put up her hand and she would be given the opportunities she wanted and the resources she needed to succeed.

“There are so many opportunities at Microsoft to grow in your role, take on stretch projects and develop yourself personally,” she says.

“If you want it, and you vocalise it, those prospects are available to you. ”

Working at Microsoft, Lee-ann gets hands-on experience with a wide range of new and emerging technologies, allowing her to expand her skillset every day. And she now has access to hundreds of technical, managerial and professional development classes, run by both business leaders and colleagues.

On a personal level, Lee-ann loves that the company takes an active role in tackling social issues through programs like Male Champions of Change, in which male business leaders find ways to break down gender disparity in tech.

“Take every opportunity you can get and run with it”

Now, as a senior in her field, Lee-ann has a chance to mentor those starting out in their careers, including fellow women. While she can see that there are more opportunities for women in tech today than there were a decade ago, there’s still plenty of work to do.

“I think women in tech suffer a lot from a lack of self-confidence,” she says. “Having the right support structures around you can really help with that. We just need to keep telling people, ‘You’ve got this – you’re in that room for a reason.’”

Lee-ann has now stepped into an acting lead role. With the full support of Microsoft behind her, the sky is the limit. Reflecting on her own career, Lee-ann’s advice to her younger self is very simple: “Don’t change a thing. Jump into things wholeheartedly, take every opportunity you get and run with it.”