To streamline update management and eliminate the need for on-premises infrastructure to deploy feature and quality updates, Microsoft Digital implemented Windows Update for Business (WUfB). It provides centralized management and reduces the level of effort required to keep Windows 10 devices up to date. With WUfB we can control how and when Windows 10 devices at Microsoft receive updates, configure restart policies for enforcement, and use analytics services to monitor our update compliance.

Windows was traditionally serviced with major version releases every few years, service packs, and monthly updates. We had to approach almost every major update release as a complicated, long-term project. It was time consuming, costly, and often disruptive for the business. For Windows 10, an operational approach to deploying major updates was needed—an approach that allowed processes to be continually refined with each release, reducing cost and complexity over time.

With Windows 10, our updates are smaller and more frequent. They come in two flavors:

WUfB helps us keep Windows 10 devices at Microsoft up to date by connecting them directly to the Windows Update service. With WUfB, we can control how and when our employees’ and vendors’ Windows 10 devices are updated, including update deferments. We can also restart enforcement using group policy for domain-joined devices, and Microsoft Intune policies for cloud domain-joined or Azure AD-joined devices. It also provides centralized management and can be configured without requiring any on-premises infrastructure.

Using co-management strategies to get to modern management

Most employee and vendor devices are still AD-joined and managed with Configuration Manager. To simplify IT administration, we’re making modern management with Intune and Azure AD the default experience for new devices. As illustrated in Figure 1, WUfB has made it possible to shift our update-management workload to the cloud and introduce consistency in how we deploy updates to both domain-joined and managed devices. 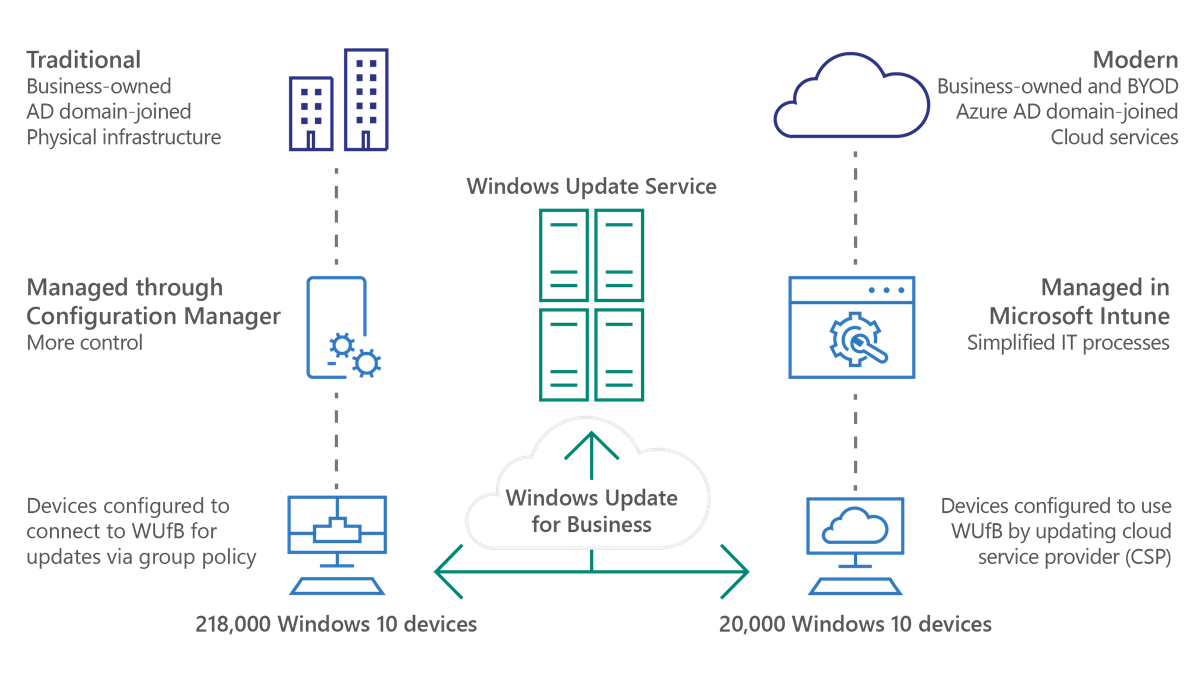 We began moving all of our Windows 10 update servicing into WUfB after the release of Windows 10 version 1803, also known as the Windows 10 April 2018 Update. It offered new features that improved control and visibility of WUfB, and it helped us better manage, secure, and target deployments. Specifically, this version provided the following benefits:

To view our update policy configurations, including the new settings in Windows 10 1909, see Appendix A: Windows Update for Business and restart group policies.

To align with our continuous-update delivery model, Windows 10 now has two servicing channels. Each servicing channel provides different levels of flexibility over when feature updates are delivered to client computers after they are released:

We configured feature updates in five waves for domain-joined devices to optimize bandwidth utilization, avoid overloading support resources, and mitigate risks. All Intune users are configured to have feature updates deployed in a single wave. As the number of Intune devices grows in our environment, we’ll likely segment that group into multiple waves.

We’ve also added a group of roughly 1,000 devices to our Windows Insider prerelease channel to validate prerelease feature updates. This group of early adopters provides valuable feedback to the product group that helps prepare feature updates for their release.

Previously referred to as upgrades, feature updates are released every six months. They include security and quality revisions, as well as significant feature additions and changes. At Microsoft, we broadly deploy every feature update as soon as it’s publicly released by the Windows product group.

Most of our Windows devices are configured to update twice a year on our Semi-Annual Channel. For most enterprise customers, we recommend using Insider Release Preview for early adoption and targeted validation for a subset of devices, and then using SAC for broad update deployment.

Note: While enterprise customers can defer or skip an update, Microsoft recommends you deploy all feature updates.

WUfB has eliminated the need for update-package creation, as well as the need for a physical infrastructure to host update packages. When we were using Configuration Manager to deploy feature updates, we needed to create and package a task sequence for the update and then test the package. After successful testing, we replicated the package to all Configuration Manager distribution points globally and published the packages for deployment. For packaging, replication, and publishing activities, we’re saving 120 hours of work per deployment, with an additional 90 hours of savings in testing because we don’t need to validate our installation packages.

These WUfB improvements have saved us time without hurting us on compliance—we’ve been able to maintain the initial target compliance rate of 95 percent within 10 weeks of a feature update release.

To meet security and compliance requirements, we defined a target compliance rate and use restart policies for enforcement. As soon as a quality update is offered on devices, it downloads and installs. If a reboot is required, the device is put into a “pending restart” stage. The enforcement of the reboot policy is set for five days.

In Windows 10 1803 and earlier versions, the first two days after a patch is installed, the device tries to restart outside of device active hours. (Default active hours are 8 AM to 5 PM, unless specifically set via Group Policy/Intune CSPs.) If the device isn’t restarted successfully within the first two days, the user will start receiving prompts to schedule the restart, with options to snooze or dismiss the notification. Users can schedule the restart, but they can push it out only until the IT pro-configured deadline day [Auto restart (two days) + Snooze (two days) + deadline (three days)]. This means they’re able to snooze for two days. If a user hasn’t scheduled a restart, the machine will force-restart on the deadline day after two notifications (one notification two hours before the restart and the other 15 minutes before).

In Windows 10 1809, we can have Windows 10 devices go directly into engaged restart after an update is downloaded and installed. Rather than the device trying to auto-restart outside of business for the first two days after an update is installed, with WUfB configured for engaged restart, users are notified of the pending restart right away, and they have the option to restart immediately or schedule the restart at a more convenient time. They can still snooze for two days, and they have five days to schedule their restart.

Beginning with Windows 10 1903, the compliance-deadline policy was introduced and broadly utilized within Microsoft. This lets the IT pro set the deadline in number of days, and a grace period for the devices. This policy starts the countdown for the update-installation deadline from the moment the update is published, instead of starting with the “restart pending” state as the older policies did. The policy also includes a configurable grace period to allow, for example, users who have been away to have extra time before being forced to restart their devices. Further, the policy includes the option to opt out of automatic restarts until the deadline is reached, by presenting the “engaged restart experience” until the deadline has expired. At this point the device will automatically schedule a restart regardless of active hours.

We broadly rolled out WUfB for quality updates in September 2018. One month later, at our next big patch Tuesday, we achieved our target adoption rate of 95 percent in a record-setting 10 days. Since then, we’ve seen more improvements—for example, we’ve already had a 50 percent reduction in the work related to applying Windows quality updates in our environment.

Because bandwidth for downloading new updates is a common concern, Microsoft uses delivery optimization to share the workload of downloading update packages between multiple devices in the environment. This sharing is done through a self-organizing distributed cache that allows clients to download update packages from alternate sources (such as other peers on the network) in addition to the traditional Internet-based Windows Update servers. This is configured through group policy and in Intune. To make this work, we changed some delivery optimization settings:

Note: More details about these enabled configurations are included in Appendix A: Windows Update for Business and restart group policies

For Active Directory domain-joined devices, monitoring update installation compliance levels after moving the update service out of Configuration Manager can pose a challenge for organizations that haven’t adopted Windows Analytics or Desktop Analytics to monitor their Windows 10 devices. The traditional method for monitoring update installations with Configuration Manager doesn’t work because Configuration Manager can’t see updates that have been installed through WUfB. Organizations that are considering using WUfB also should invest in Windows Analytics or Desktop Analytics to gain visibility and actionable insight into their environment, including update compliance.

Analytics solutions use diagnostic data to provide reporting and insights into an organization’s Windows 10 devices. We have been effectively using Windows Analytics and Desktop Analytics to determine what has been installed on which devices. We use that information to monitor update installation and restarts. 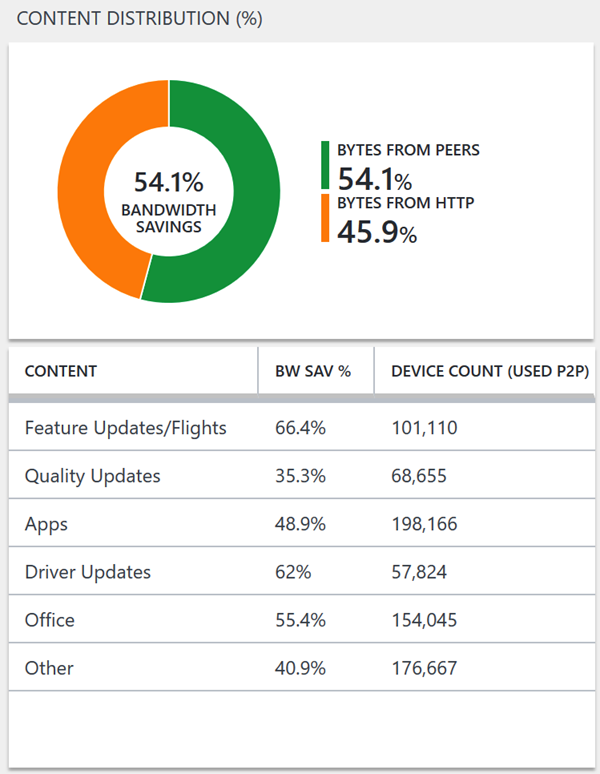 Update compliance is a new Windows Analytics solution that enables organizations to monitor Windows 10 security, quality, and feature updates. It uses Windows 10 and Windows Defender Antivirus diagnostic data for all of its reporting. It collects system data—including update deployment progress, WUfB configuration data, Windows Defender Antivirus data, and delivery optimization usage data—and sends it to a secure cloud to be stored for analysis and usage in Azure Log Analytics.

Windows Update for Business plays a key role in supporting the company’s Windows as a service continuous-update delivery model. It helps us in Microsoft Digital keep devices secure with the latest updates and helps our users take advantage of the latest Windows features. Updating devices and keeping them up to date are key pillars in keeping business information secure, particularly in an ever-evolving threat landscape. We don’t need to wait for large version releases and then plan the full upgrade deployments to roll out new and improved operating system and security features to our employees and vendors using Windows 10.

Modern management strategies, like moving operating system update servicing to the cloud and being able to manage updates for both domain-joined and managed devices with a single service, are simplifying and improving how we manage devices. After we configure our update policies for WUfB, we have confidence that it will just work. In the rare event that an update breaks something in the environment, it can be rolled back.

Are you ready to learn more about deploying Windows 10 or Windows as a Service, or using Windows Update for Business in your organization?

Compliance-deadline settings with grace periods are still being validated on Intune, so we are using engaged restart policies for Azure AD-joined devices.