With the right approach, you can migrate mission-critical SAP systems to Azure for maximum cost savings, and gain agility and uptime. Microsoft—partnering with the Azure Customer Advisory Team—evaluated our SAP systems with two strategies. First, we started by moving environments with the least user and business impact—like our sandbox. This experience helped us define best practices on Azure for our second strategy, to move entire system stacks (from sandbox to production), starting with lowest-risk systems.

You’ve studied the benefits of moving your SAP systems to Azure and have decided to make the big move. The next logical steps are to determine what to move first and how to make the move as smooth as possible. After 12 months of migration processes, Microsoft has completely migrated its SAP instance to Azure. Our SAP landscape consisting of 16 TB of compressed data (50 TB uncompressed) is in the public cloud, Azure.

We migrated our SAP infrastructure using both horizontal and vertical strategies. The horizontal strategy—where we first moved low-risk environments like our sandboxes—gave us Azure migration experience without affecting critical business functions. The vertical strategy—where we moved an entire low-impact system from sandbox to production—gave us experience with production systems on Azure. For both strategies, we moved our lowest-risk SAP resources before more critical ones.

Like many companies, Microsoft uses SAP—the enterprise resource planning (ERP) software solution—to run most of our business operations. SAP provides mission-critical business functions for finance, human resources, and global trade. In today’s business world, rising costs, new processes and requirements, and a huge influx of data make it challenging to be agile. With an agile infrastructure, you minimize downtime, risk, and costs, and improve employee efficiency. SAP on Azure is your trusted path to innovation in the cloud. It provides an agile infrastructure, minimizing downtime, risks, costs, and improves employee efficiencies to drive the power the digital transformation.

At Microsoft, our SAP Basis team has partnered with the company’s Azure Customer Advisory Team to overcome these challenges. By moving our SAP systems to Microsoft Azure, we have:

We’re running SAP—the backbone of our business processes—on Azure technology that we trust for our mission-critical systems. If you’d like to learn more about our cloud-adoption approach and how we optimize our servers, resources, and costs in Azure, see Optimizing SAP for Azure.

Strategies we used to move our SAP systems to Azure

When we decided what SAP systems to move to Azure, we used horizontal and vertical strategies. Figure 1 shows part of the SAP landscape at Microsoft.

In Figure 1, the rows, columns, and blocks illustrate the horizontal and vertical strategies that we use for our SAP landscape. Here are some things to note:

We started with a horizontal strategy from the bottom of the stack because it’s a safe way to experiment and gain experience with Azure. It’s also a good strategy to use while you redefine your operational, deployment, and approval processes. These processes will change as you move to Azure. Here’s how the strategy works:

To get experience with production systems on Azure, we used a vertical strategy with low-risk systems in parallel to the horizontal strategy. This also gave us a chance to adjust our internal processes for Azure and train team members. It’s a great way to spot any issues in production early on. Here’s how the strategy works:

Where we are today

Figure 2 shows the progress we’ve made since we began moving our systems to Azure in 2014, which we completed in February 2018, four to six months ahead of our original timelines. Azure now supports 100 percent of our SAP infrastructure, and all SAP Systems have migrated. 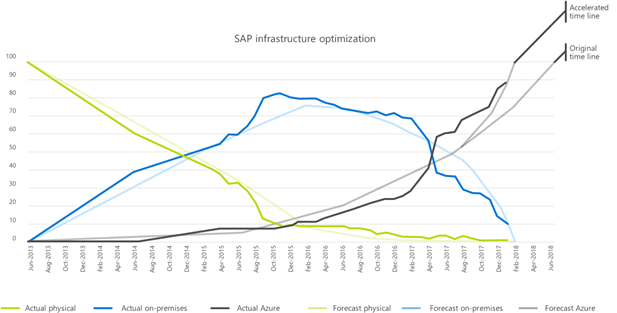 We’ve seen many benefits from moving SAP to the cloud, including:

For SAP on Azure, we used the following technologies and features in our hardware implementation:

While implementing SAP on Azure, we took a few technical considerations into account. For example, most of our systems have some interfaces where they write files to a file server. With the move to Azure, writing files over a more indirect network path can cause slowdowns because the data isn’t streamed all at once. To prevent slowdowns, we built file servers for systems that we moved to Azure right away, while still maintaining our on-premise file server for systems that remained on-premises.

Another example is bundling our tightly coupled systems from a business process standpoint and moving them together. This ensures that tightly connected systems will have no network latency issues. For daily work, don’t move an SAP system tightly connected with US-based, on-premises apps to Azure on another continent—although it may be fine for business continuity.

Figure 3 shows our SAP ERP/ECC production system. Our entire SAP environment is now 100 percent hosted in Azure. We can scale up and down by increasing and decreasing the sizes of the virtual machines. The design and architecture have high availability measures against single points of failure. So, if we need to update Windows Server or SQL Server, do hardware maintenance, or make other system changes, it doesn’t require much—if any—downtime. We equip our production systems with standard SAP, SQL Server, and Windows Server high availability features.

For high availability, SQL Server Always On is a standard method. We have two database servers where we use SQL Server Always On with a synchronous commit. If one database server goes down or is undergoing maintenance, we don’t lose data. This is because the data is committed on both database servers, and SAP automatically connects to the other database. Because we can use the secondary database, we can upgrade software and SQL Server, roll back to previous releases, and do automatic failover with no or minimal risk.

Also, for high availability, we have an SAP Central Services instance that runs on Windows Server Failover Clustering. The two cluster nodes share the data image.

If there’s high load and we need to scale out, we add spare virtual machines to our SAP systems. And when we’re doing rolling maintenance, we also use the spares to replace a server without reducing overall resources.

Other Azure and Windows Server capabilities

At the beginning of our journey to Azure, we were excited about Azure File Storage (files shared in the cloud) and were planning to use it for SAP transport directories. But after we implemented the solution in the first systems, we made the decision not to use it—Azure storage had too many limits on how to access the transport files easily, which made support for SAP transports and troubleshooting difficult. We reverted from Azure File Storage to normal disks.

We’re using Storage Spaces for all systems that require higher I/O and throughput and need to store more data in a single drive on the operating system level.

With Storage Spaces, we can combine multiple virtual hard drives on an Azure virtual machine into a single drive. This helps us to easily grow drives and gives us better performance than a single Azure virtual hard drive. The first implementation of Azure Storage Spaces was our archiving system, where we needed a single 11 TB-drive on Storage Spaces to store intermediary files between two systems. Standard disks, as well as Premium disks, can be used for storage spaces. Depending on performance requirements, we decide what disks should be used; for example, Standard disks for backup spaces and Premium disks for data drives for the SQL Server database.

During our journey to Azure, many new features have been released. For example, Managed Disks became available. With this feature, storage design for higher throughput and I/O is easier and growing disk drives that are attached to virtual machines is simple. We switched our template design to use Managed Disks as soon as the feature was available on Azure. Other features are becoming available all the time. It’s important to stay up to date on capabilities to ensure the best performance for applications, where needed.

New features that we implemented after the migration are the following

Again, the benefit of Azure is that even if a setup doesn’t work, it’s easy to reconfigure without a big cost.

For less risk and downtime, we use virtual server names—also called server alias names. Here’s how it works:

In the past, when we upgraded an operating system, we flattened machines and rebuilt them, which caused downtime. Today, we bring up a new virtual machine with a new operating system and install the software in parallel with another machine. Then we move the virtual server name and IP address over and retire the older virtual machine.

If you have ExpressRoute connectivity between on-premises systems and Azure, you don’t need a public port open to Remote Desktop Services, and Terminal Services doesn’t have to connect to virtual machines via a public IP address.

For high availability, there are several architectures where you need a load balancer in your SAP landscape. Use internal load balancers that don’t have a publicly exposed surface. For your internet proxy, don’t go directly from Azure virtual machines to the internet. Instead, make sure that all your traffic goes through the proxy that’s set up on-premises (the company proxy) because it has a firewall and rules.

When you’re planning your architecture, use Azure Resource Manager security groups to define who can access, administer, and perform operations on a virtual machine.

Communicating our strategy across Microsoft

We have two strategies for informing teams, executives, and other stakeholders in Microsoft about our SAP migration work, and we’ve received positive feedback. The communications that we send are tailored to one of two audiences:

Here are some examples of what we’ve learned or changed based on our experience:

We will take advantage of more Azure benefits and share our experiences to help customers do the same. For example, we plan to: