“Hey, Michael, there’s this teacher up in Canada who loves OneNote. He’s interested in sharing his story with us on the blog. I’d like to drive up there and talk to him in person. Want to work together on this?”

Michael, my colleague here on The Office Blog, got all excited about the idea and started talking about recording the interview and making a video that could be shared with teachers. The ideas came pouring out of his mouth, and I could hardly keep up. I needed a way to capture this free flow of information, because this project was sounding bigger than I had initially intended. I decided to create a OneNote notebook to plan and track our adventure.

Here’s why OneNote was perfect for the job.

#1: Shared notebooks can be accessed anywhere (even Canada)

Collaborative projects can sometimes be tough, because each person has their own approach. Plus, this wasn’t our only project. Michael and I couldn’t dedicate endless hours meeting with each other to discuss details. And we didn’t want to spam each other with a bunch of email either. So we decided to divide up our work load and keep our notes in a shared OneNote notebook.  I created a new OneNote notebook from my PC and saved it to our team’s SharePoint site, an online document repository that our team uses. SharePoint let us access the same notebook from whatever computer we were working from.

Once Michael was onboard, and knew a bit more about what kind of story we wanted to tell, I started researching our location: Pitt Meadows Secondary School.

The first item on my agenda…where the heck is Pitt Meadows? Queue Bing Maps.

Using my favorite OneNote keyboard shortcut (Windows key + S), I took screen clippings of my research. Screen clipping lets you select and capture whatever is on your computer screen.

I copied the Bing map of our driving route with detailed driving directions into our notebook.

Next, I found an exterior picture of the school that we used later to plan our video. 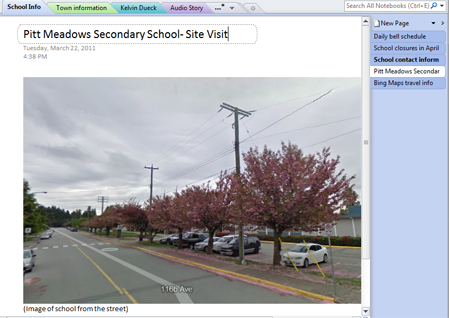 Last, but not least, I searched for Starbucks coffee shop locations. I added this map for Michael. Believe me, it’s best to keep a grande vanilla latte in the man’s hands. 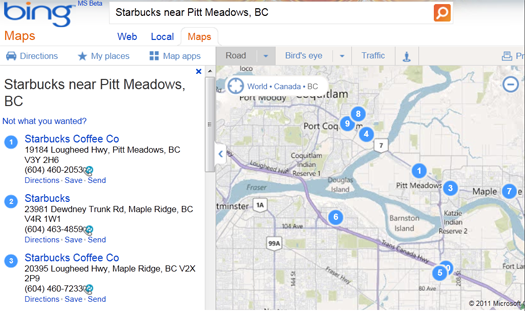 Then I dug into the Pitt Meadows Secondary School website. From there, I found the school closure dates and daily bell schedule. I didn’t want to plan a school visit for a day when school is closed. What a horrible thought! 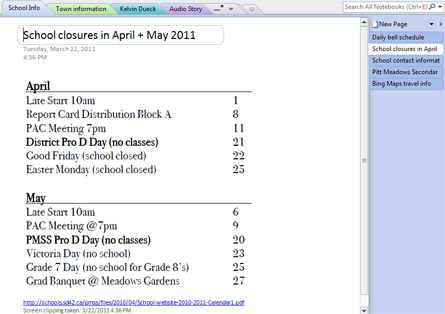 #3: Less email clutter in my Inbox

Kelvin, the teacher, preferred corresponding over email. We probably exchanged a handful of emails over the four months it took to plan our trip. I didn’t add Michael to these emails, because they contained project details. Why clutter up his Inbox? Instead I dragged the emails from my Outlook Inbox into the notebook. That way Michael could read them whenever he chose to catch up on the project.

Tip: You can also click Send to OneNote on the Outlook Ribbon.

You’ll select the OneNote location and then the selected email will appear as a new page in that section of your notebook. 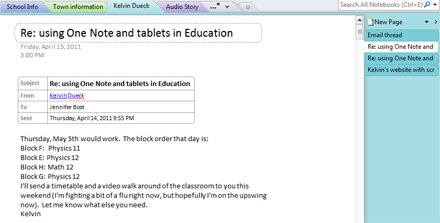 In addition to all of this great information, bless his heart, Kelvin even used his mobile phone to video record the inside of his classroom. He posted the video to YouTube and then emailed me the link. That link was also added to the notebook.

#4: OneNote is like a canvas, I could easily move images around

Now that we knew a bit more about the filming location, I started thinking about what our video would look like. I followed a storyboard model for this.

Normally storyboards are rough stick-figure sketches of what would appear in each frame of the video. But I was working on a PC that didn’t have ink support for easily sketching out drawings.

Why didn’t I just grab a pen and paper? Well, frankly, I wanted to keep all of our project information in the OneNote notebook. That way Michael and I both had access and we didn’t have to worry about a paper copy getting lost or destroyed.

I combed the Internet for pictures and started building my storyboard that way. I dragged the pictures around on the page until I was happy with the sequence. Then I added my “director’s notes” next to the corresponding picture. This storyboard really helped Michael understand my point of view. It allowed us to quickly dive into the video production details.

We only had one day to film all of the footage we would want to use in the final video, so we really had to make that time count! Based on this storyboard, I cobbled together a schedule for the day. That way, we knew for sure when to film certain shots during the day. This schedule was purely for staying organized and on-time. 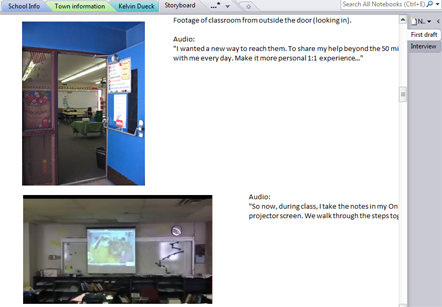 #5: You can print when you must

When planning anything, always have a backup plan. What if there was no Internet connectivity in the classroom? What if my laptop battery died? These were all reasons why I wanted to print out my driving directions, the storyboard notes, and the video shooting schedule. 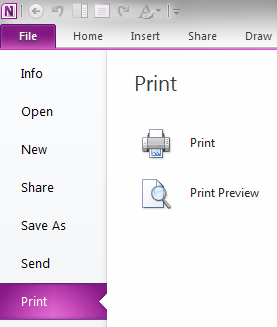 Why was this so important? Well, I own a smart phone that includes a fantastic navigation app. Like so fantastic that I don’t normally bother looking at directions before I hop into my car and start driving.  But because I hadn’t made this trip before, I made sure to print out the driving instructions as a backup plan. And this turned out to be a good thing.

The first hour we didn’t need them. My phone navigation system pumped out reliable directions and I just followed its commands. But then something planned, but unexpected, happened. I crossed the US-Canadian border… 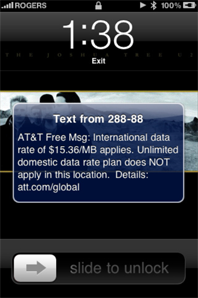 When we got back from our trip we had 10 hours of video footage that we needed to condense down to a 6-8 minute video. That’s like editing down a 200,000 word novel into a 2,000 word CliffsNotes.

The last section in our shared notebook became my transcription of Kelvin and his students’ narration from our video recordings. Michael prepared audio clips of the interviews we conducted with Kelvin and his students. I listened to each clip several times and made note of the footage I wanted to use in the final video. Again, this was a conversation-starter for me and Michael as we dove into the editing portion of our video project.

Once the video was completed, I realized how much harder it would have been to stay connected and on track without OneNote!

Now, enough about us. The real star of this whole project, the whole reason for all of it, is Kelvin Dueck and his students. Watch our video and read more about Kelvin in Teaching with OneNote: How students benefit.

–Jennifer Bost
Jennifer is a writer for Office.com and is the editor of the Office in Education blog.