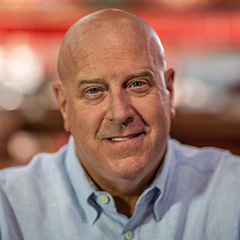 From the smoky Whiskey River BBQ to the spicy Burnin’ Love, a well-crafted hamburger is the claim to fame of Red Robin Gourmet Burgers. But there’s more on the menu at this casual-dining chain’s restaurants and considerably more to the company. Its core belief is that empowered, enthusiastic employees hold the key to both customer satisfaction and a healthy bottom line. One of the primary ways Red Robin builds the staff cohesion that drives success is its Yammer social network.

Headquartered in Greenwood Village, Colorado, Red Robin has more than 450 restaurants in the US and Canada. “We had a lot of informal communication channels in the past, and that meant a lot of information silos,” says CEO Steve Carley. “When I took this job, one of my core objectives was improving communication across geographical and organizational boundaries. We wanted to give everyone a voice, from management to team members serving the guests who come into our restaurants.”

While company brass knew communication had to change, it took a while to figure out how. “Our quarterly focus group kept telling us we weren’t communicating enough,” says Chris Laping, CIO and senior vice president of business transformation. “Initially, we thought that meant staff wanted more from management—more memos and meetings. Then we realized that what people were saying wasn’t so much, ‘We want to hear more,’ but ‘we want to be heard.’”

“Giving employees a business-oriented social network like Yammer—which is aligned to the way they work and communicate in their personal lives—is intuitive, uncomplicated, and makes good business sense,” he adds. “We want our team members taking care of guests, not nose-deep in training materials.”

“Yammer encourages team members to feel connected to each other and plugged in to the heart of the business,” Laping observes. “When people care about their jobs, they execute beyond your wildest dreams.”

As Carley and Laping had hoped, Red Robin’s energized workforce has used Yammer like an engine—driving business transformation. For instance, when the company introduced the bacon-laden Pig Out burger, management was disappointed by the lack of customer feedback on Red Robin’s Facebook page—but learned a great deal from the considerable buzz on Yammer. “Managers started talking about ways to tweak the Pig Out recipe, and four weeks later, we had an improved, kitchen-tested version to roll out to restaurants,” Laping reports. “That’s a process that would have taken 12 to 18 months before.”

Last year, Red Robin’s CFO took to Yammer to issue a companywide challenge: the employee who came up with the best cost-saving idea would get $1,000. “Yammer let us have a really rich dialogue with team members and managers on all the cost-saving opportunities we have in the company,” says Laping. “The winning idea—a reusable kids’ cup—is a great way to give our environmentally conscious guests exactly what they want while introducing a great cost savings. I’m convinced that idea would never have surfaced if we didn’t have a social network.”

It’s not just restaurant staff who feel more plugged in to operations thanks to Yammer—it’s corporate executives, too. CEO Carley uses the network for everything from posting videos about business results to “liking” employee successes singled out by Yammer’s Praise feature. “But the number one thing I use Yammer for is to feel the pulse of the business from the perspective of front-line team members,” he says. “That’s invaluable to me.”

Social learning is the next step in Red Robin’s drive to more thoroughly engage its workforce. In late 2012, it began rolling out a new Yammer network they call “Yummerversity,” which uses collaboration to reinforce new team members’ training. “Traditional training doesn’t really encourage people to work with one another,” says Laping. “Yummerversity not only supports lessons picked up in training, it encourages connection and collaboration.”

One of the commitments Carley made when he stepped into the CEO role was shaving two percent off costs without compromising guests, team members or quality. In the past two years, the company has saved double that amount.

Part of the credit goes to Red Robin’s social network. “Yammer helps everybody align on the types of changes we’ll take on as a brand to win in the marketplace,” says Laping. “Change for change’s sake doesn’t mean much; business results matter far more. We’ve seen amazing growth in the last ten quarters, growth that has outperformed many bestinclass competitors. That tells me that our change agenda is working.”

“Historically, if you wanted to get ideas from the front line, you went out and you talked to people,” Carley says. “But you can only touch so many people that way. With Yammer, you can mine the collective wisdom of our 26,000-strong workforce.”

Another way Yammer makes Red Robin more agile is by leveraging the considerable power of crowdsourcing. “In the past, if you had a problem with gift cards, you first had to decide whom to reach out to so you could find your answer,” says Jessica Elliott, Communication and Deployment Manager. “Marketing, because they sell gift cards? IT, because you use technology to redeem a card? With Yammer, you don’t have to worry about who’s got the expertise you need. You just post a question and you get your answer—fast.”