About six months ago, we announced that Excel Web App and all Office Web Apps are destined to become a comprehensive productivity experience on more browsers and devices–not just companions to the desktop applications. In June, we released a major update, and I’m excited to share another significant step forward with you today! Let’s look at some of the awesome new things you can do in Excel Web App, now in both SkyDrive and Office 365, and also take a peek at some of what’s coming in future updates.

We’re still focused on your feedback

As I wrote in an earlier post, we have a list of features and functionalities that we’ve prioritized based on customer feedback and market research. The feedback from the survey was great, and confirmed for us that we’re generally working on the right things. We’ve continued to focus on those features that customers are asking for–I’ll touch on a few of them here, but I wholeheartedly recommend that you try the new Excel Web App today to get a sense for yourself for how great it is.

If you are interested in trying out the features in this blog post yourself, you can give it a shot here: October 2013 Web Excel Update Demo.xlsx. Copy the workbook to your own SkyDrive and then view it in edit mode to see some of the features in action.

Excel Web App has supported multiple users editing the same workbook for years, but with this release things have gotten a lot better in two ways: the data flows between editors much faster (nearly instantly in most cases) and now you can see what cells other users are editing so that you don’t accidentally edit the same cell at the same time. This area is also exciting because we’ve added the same functionality to Word and PowerPoint Web Apps–read more about it here. 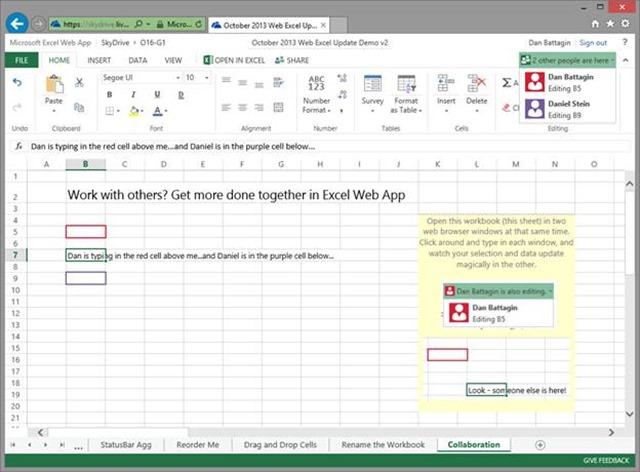 Besides support for Freeze Panes (introduced in June), Sheet Protection has been one of our biggest requests. In the past, Excel Web App would not load workbooks that contained Sheet Protection, but now it does, which will prevent users from selecting or typing in protected cells. This allows for easy creation of forms and calculators that you can fill out without worrying about the rest of your workbook getting messed up. Pro tip: Use Data Validation and Sheet Protection together for an even slicker solution! 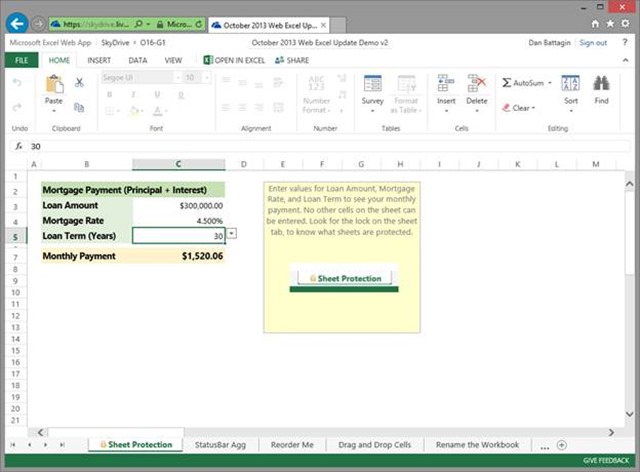 Some of the little things in Excel are what make it such a nice application to use. Quickly selecting a group of cells and seeing the SUM, AVERAGE, and COUNT in the status bar qualifies for many of our users as one of the most convenient shortcuts. Now those aggregates are shown in Excel Web App as well, making life that much easier. 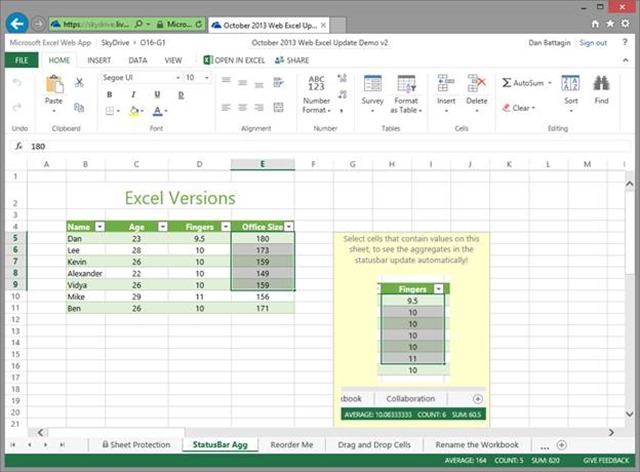 When creating a workbook with multiple sheets, it is common to want to move a sheet from one location in the workbook to another–maybe move a sheet to be the first sheet if it is the most important. In the past, this was something that users could not accomplish using only Excel Web App, but now there are two ways to perform this common operation: right-click the sheet you want to move and then choose Reorder, or just click and drag the sheet tab to the desired location, and you’ll see an arrow to indicate where the sheet will end up. 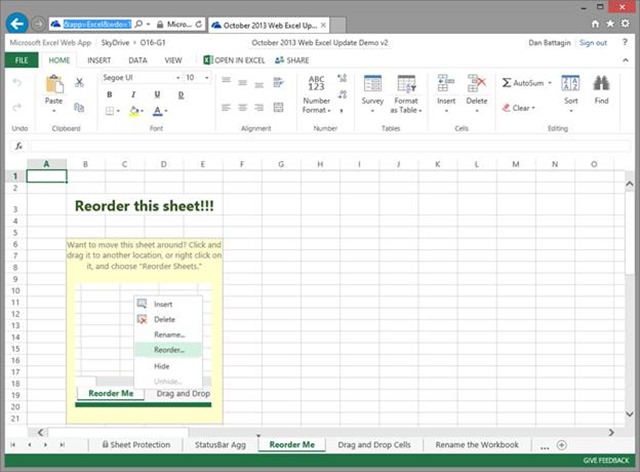 Similar to the way that you can drag and drop sheets within a workbook, one of the easiest ways to move cell values from one place to another is to drag them. This is also similar to Cut/Paste, but can be more convenient since Excel will show you the group of cells that’s being moved, and what range will be replaced when you drop the cells in their new location. 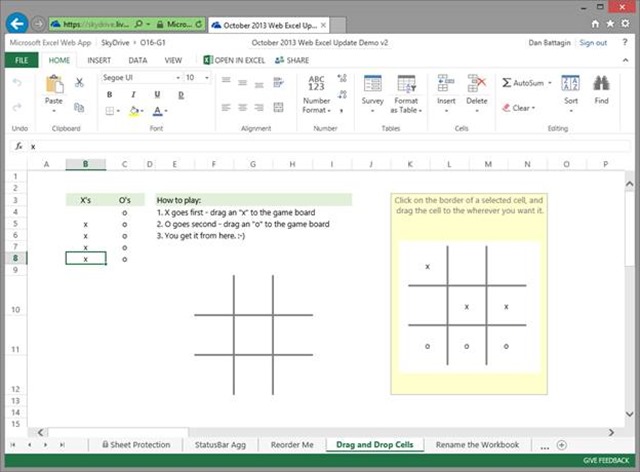 Figure 5: Dragging cells in Excel Web to move them from one place to another. O wins!

A final piece of feedback we’ve heard users want is the ability to rename a workbook–without creating a copy of it–from within Excel Web App. In the past, renaming has been possible, but the user would have to close the file, navigate to the file in SkyDrive, and then use SkyDrive UI to rename the file. Now you can simply click the filename in the header and type in your new name. Simple and quick! 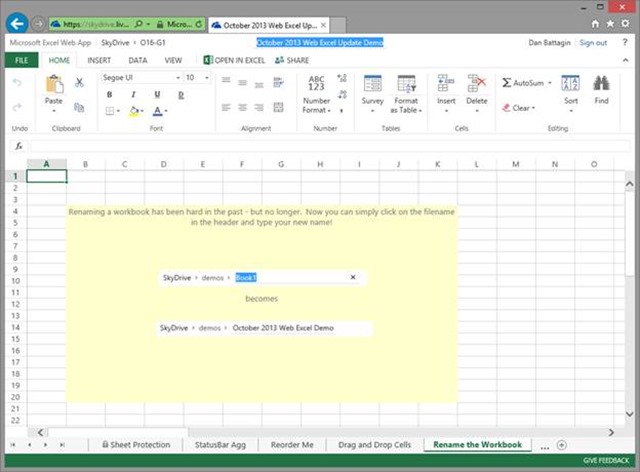 Figure 6: Simple and quick rename of a file, entirely within Web Excel.

We’re still working on more of what you want

I think you’ll agree that the improvements we’ve looked at so far are great ones for Excel Web App. But we’re not done–not by a long shot. We have much more in the pipeline, and in the coming months you’ll see us release even more of the features that you’ve come to love in desktop Excel, as well as some you may not have even realized existed. Log in and give the updated Excel Web a try–we think you’ll like it.

Remember to grab the sample workbook, and as always, we love to hear what you think, so let us know in the comments section, and have fun using the new release of Excel Web App!