This week the Garage Series hits Austin, Texas and the Microsoft Exchange Conference. We kick off the series on location with Garage Series alum, Steve Chew, to continue last week’s conversation about Groups and show group collaboration in action with new email experiences, group experiences across Office 365, inline editing using Office Online within Outlook Web App and a sneak peak of the upcoming OWA for Android app.

Last week, Christophe Fiessinger introduced the concept of Groups on the show. In that case we were filming live at SharePoint Conference and focused mainly on the new experiences in Yammer and SharePoint. Fast forward to the Microsoft Exchange Conference in Austin a few weeks later with this show where we focus on the Groups experience in mail. Both these vantage points highlight the great thing about Groups – whether you prefer communicating via social, collaborating in sites or sharing information and calendars in mail, Groups are consistent throughout Office 365.

When you take the concepts of Groups beyond the browser, the benefits even extend into mobile platforms — like OWA for iPad or the upcoming OWA for Android. We demo both of these in the show and take a look at Groups experiences within the OWA for iPad and OWA for Android apps.

Of course we don’t stop there. Steve also shows the new embedded video player in Outlook Web App and Office Online editing of mail attachments directly within OWA. To see all of this in action, you’ll want to watch the show.

Next week, we’ll take a closer look at OneDrive for Business with engineering lead, Michael Connolly.

Thanks for watching and we’ll see you next week,

The evolution of email blog

By day, Jeremy Chapman works at Microsoft, responsible for optimizing the future of Office client and service delivery as the senior deployment lead. Jeremy’s background in application compatibility, building deployment automation tools and infrastructure reference architectures has been fundamental to the prioritization of new Office enterprise features such as the latest Click-to-Run install. By night, he is a car modding fanatic and serial linguist. Steve Chew @ChewOnEmail is a senior technical product manager in the Exchange group at Microsoft. His primary focus is on collaborative inbox scenarios for Outlook and Outlook Web App. 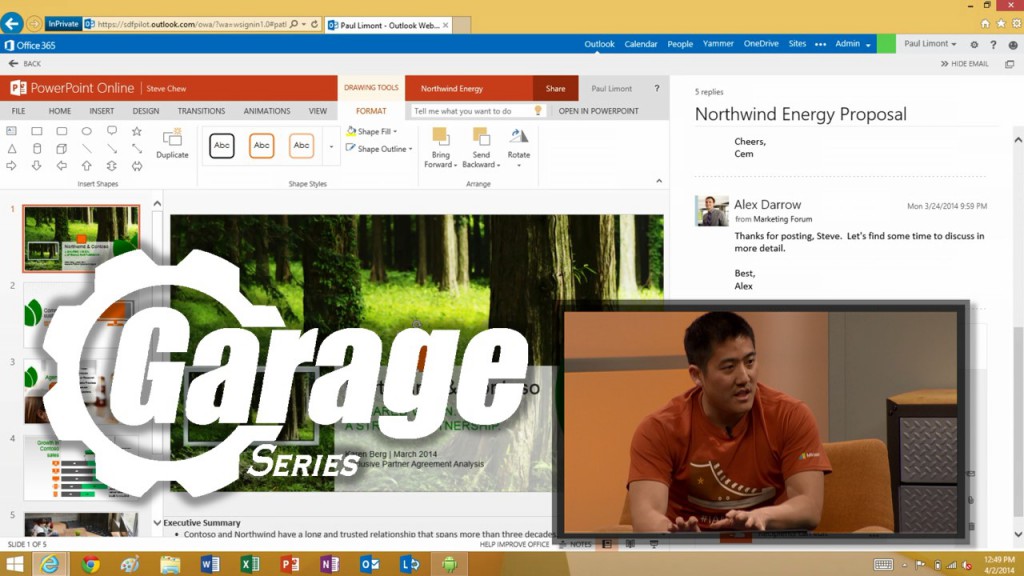 At Microsoft, we believe that the cloud will power the work of the future. Overwhelmingly, our customers are choosing the cloud to empower their people—from frontline workers on the shop floor, to on-the-go sales teams, to remote employees connecting from home. We’ve seen incredible cloud adoption across every industry, and we will continue to invest…

How partners are fueling growth and innovation on Microsoft Teams

Teams not only enables you to meet, chat, call, and collaborate with your team, but it also serves as a platform that brings together the apps and workflows that help you get your work done.

The evolution of mobile productivity, even when we’re a little less mobile

What’s the one essential you’d go back home for if forgotten? Maybe it’s your mask. But also, your mobile phone, right? Your personal organizer, your digital wallet, your instant camera—your mobile device has become the most essential tool you use to stay connected to the people and things that are important at home, at the office,…