A Culture Reborn Through Enterprise Social 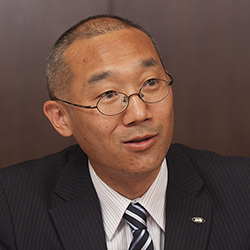 Founded in 1912, Sharp Corporation has a long history of producing innovative electronic products, from radios and television sets to advanced LCD monitors. More than a century later the multinational manufacturer continues to strengthen its global business by focusing on cultural transformation as part of a new management strategy known internally as “Recovery and Growth.” At the heart of this cultural transformation is Yammer.

“In order to support fundamental structural changes within our organization, we also needed to transform our culture,” says Shogo Fukahori, Executive Director and Chief Officer of Human Resources Development and In-House Communication, Corporate Management Group at Sharp. “Previously employees had to follow top-down decisions, but we needed to move to a culture that encouraged two-way dialogue. We believed that employees on the ground—not just upper management—should also have the opportunity to lead.”

Senior leaders first started to consider introducing an enterprise-wide social network in December 2012. Fukahori explains that at the time, “younger generations of employees were asking us to build a system that would allow them to share ideas and opinions freely with each other.” After considering various options Sharp chose Yammer not just because of cost, but because of its potential integrations with other Microsoft products. They also believed in Yammer’s potential to foster a more connected and engaged company culture. 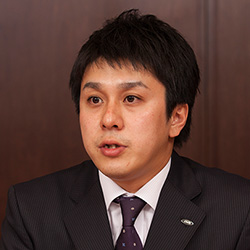 n February 2013, Sharp introduced a Yammer pilot program and established an executive team from four departments—HR, Public Relations, General Affairs and IT—to manage the deployment. Instead of mandating all employees to use Yammer, Sharp followed a policy of voluntary adoption. One way that the deployment team encouraged employee adoption was to take a flexible approach to usage rules.

Sharp’s initial deployment of Yammer was timed to coincide with the appointment of a new president, whose opening message was posted in Yammer. This enabled the deployment team to promote Yammer internally as a tool that lets employees listen to important messages from the president and engage in discussions with each other. Sharp also displayed the text of the president’s message on the company intranet portal, but encouraged employees to use Yammer because it offered them the chance to follow and participate in the subsequent company conversation.

The deployment team further drove adoption by partnering closely with Microsoft. “We had weekly meetings with Microsoft to review logs of posts and discuss best practices on how to drive Yammer usage,” says Kishio. This resulted in workshops and internal presentations about increasing business agility and shortening internal communication cycles at four different working groups. Of course, the deployment team used Yammer in addition to their company intranet portal to announce workshop details. “Within months we had acquired about 6,000 users, so I think that our first push was a great success,” says Tada. He adds that there are now about 10,000 employees using Yammer, with the deployment team aiming to further increase adoption. 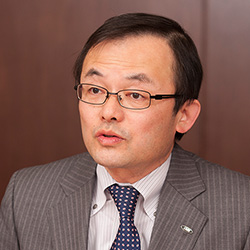 “I’m happy that Sharp employees are using Yammer responsibly and positively and that more users from each department and office are joining,” says Fukahori. Yammer has improved the flow of information and ideas between senior management and employees on the ground. “I was worried that no one would comment on the president’s opening message, but the reaction was overwhelmingly positive. Some employees even shared candid feedback and requests. Compared to two or three years ago, we are beginning to see changes in the culture at Sharp,” he says.

Of course, communication between fellow employees has also picked up, with some conversations transcending departmental and regional boundaries. For example, smartphone developers can now swap opinions about functions and user-friendliness with each other across different departments and regions. Employees can also learn about activities happening in other departments by reading Yammer posts. These are things they normally wouldn’t hear about without Yammer. As Tada explains, “Discussions tend to be transient in emails, but in Yammer many people can participate in an ongoing discussion.”

Yammer has even empowered some departments and groups to lead in new ways. For example, some department leaders now use Yammer to ask their staff for ideas on how to use the latest technology in their business. This grassroots feedback is then incorporated into product development and company policies. “We’ve created a breeding ground for collecting dispersed information from across the company. It’s a major cultural change that directors can now ask employees openly about things they don’t know about and to learn from them,” says Kishio.

Growing Networks to Grow the Business

Sharp’s goal is to have all domestic employees in Japan use Yammer so that the ideas generated from on-the-ground discussions can help enhance product development and overall competitiveness. Eventually the company plans to deploy Yammer to its expanding network of overseas offices, starting with Malaysia, then progressing to the United States and other regions. For Fukahori, the future deployment of Yammer throughout Southeast Asia is the key to growing Sharp’s business in that region. He says, “The culture and lifestyle is different in each country, so it will be important for us to adapt our communications and respond accordingly.” Yammer is the tool that will bring them closer to local markets.

For now, Sharp continues to focus on driving user adoption at headquarters. By familiarizing employees with the advantages of using Yammer, Sharp’s leadership team continues to increase user enthusiasm as well as strengthen human resource development and internal communications as part of their Recovery and Growth.