The World Series is in full swing and it yields a month filled with memorable home runs, strikeouts and game-winning hits. The soundtrack of these moments stays with you forever because of the announcers who call the games. But this is not a job for the shy or unorganized person.

Calling plays in a three-plus hour baseball game with hundreds of players throughout a 162-game season requires both knowledge and know-how. Joe Block, professional baseball announcer in Milwaukee, uses OneNote on all his devices to keep track of player stats, game stories and even to keep score, bringing the game to life for his listeners. He heard about OneNote from another announcer and friend, Scott Franzke from Philadelphia, who discovered the benefits of using OneNote long before Joe, but has learned even more through their shared use of it. Joe and Scott sat down with us and talked about how OneNote has become a necessary part of their broadcast routine, preparation and even their personal lives.

How did you first start using OneNote?

Scott – Well I kind of found OneNote by accident. I saw a free download of OneNote online and I had been looking for a way to sort of organize my notes. I used to carry around hard notebooks—thirty of them—for all teams in professional baseball. And I was looking for a way to kind of pare it down and put it all in the computer and sort of stumbled on OneNote by accident. I started messing around with it and realized pretty quickly that I could kind of mold it and adapt it to my needs. You can use it almost any way you want in terms of how you want to outline your notes and how you want them to look. Whether you’re a neat freak or whether you’re maybe a little more disorganized than I am and you’re just shoving clips in a file. So I just started to play around with it more and more, and was able to get it to a place where I could start to dump little hand-held notebooks and stop carrying them around all throughout the season.

Joe – And that way you had some nice firewood from that too! [Laughs]

Scott – Whether it’s on my computer, tablet or in my pocket on my phone. I can carry it all around, and I use a whole lot less paper now.

Joe – Well, I’m glad that you told me about it because if I didn’t know about it too I would still be using different methods. I was trying to find a way to go digital. You know, sometimes baseball announcers can be, I don’t know, somewhat romantic about their scorebook and their process.

Scott – Everybody has a different process for how they get to the same end result and I had those three-ring binders. I’d have a page on a particular player and I would write whatever notes I could find about this player. Things that maybe I couldn’t find elsewhere, or stories that I’d heard about them. Well, player A gets traded to team B in the middle of the season. And here I’m out on the road, without that players page and now I’ve got this whole list of great notes on this player but he’s back at home in that three-ring binder! Well now, with OneNote, I can take that page and move him to the proper notebook in OneNote and now I’ve got him anywhere. 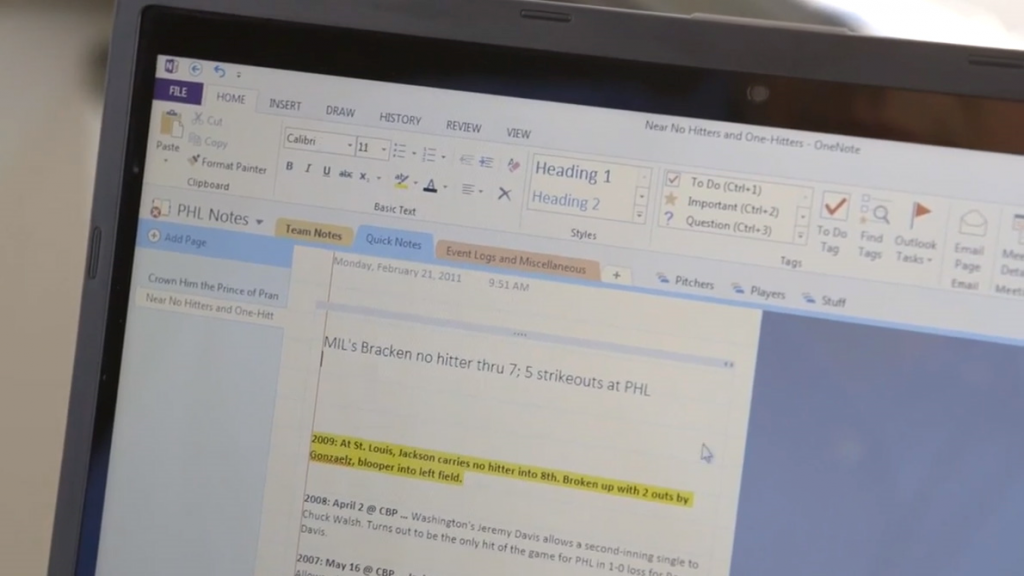 Scott Franzke keeps his player notes and stories relevant to the game in OneNote.

How do you use OneNote in preparing for and calling the games?

Scott – I scanned images of some players and hand written pages from way back into OneNote allowing me add notes to them. I think that one of the great things about it, from our perspective, was to be able to find stories on the Internet—whether it’s other newspaper clippings, items about a player—and to be able to automatically be able to send it to OneNote. And it’s there waiting for you. I do a lot of that in the winter offseason like find stuff, send it to OneNote. And in July when we go to see a specific team I have a ream of notes that I can start with and look over to prepare for the series. On the day of the game, I also send emails to OneNote that I’ve received through Outlook, like a press releases from our PR department about a player move or an award that a player won, or a charity event that’s happening tonight. Then, when that moment comes where I have a little bit of time to talk about players or events, I have all the information in front of me to add to the flow of conversation within the broadcast.

Joe – So, what I’ve done is taken Excel and tried to integrate it into OneNote with different things that I’ve done. For instance, if I’m trying to do my score sheet, I can put it into OneNote and keep score in OneNote. You can use all the other Office products and combine them all into one.

Scott – Yeah, I’ve discovered the apps that connect with OneNote. I use Feedly so I’ve got news sources coming right to my phone and when I am traveling, having lunch, on the bus, on the treadmill, or on the golf course, I can browse through stories. If I see one that I like, I tap the Send to OneNote button and it’s waiting for me in my folder when I get to the ballpark that night. It’s brilliant. It’s one of the best features that OneNote has because we’re always collecting information from a variety of sources. Maybe a crazy game in Chicago the night before that had a strange replay and all of the sudden you’re looking at the same situation in your game that night. You say, “Hey, there was a game last night in Chicago that had this very same thing happen and here’s what they did about it.” And I know that because I took two seconds to flip through Feedly items I sent to OneNote. 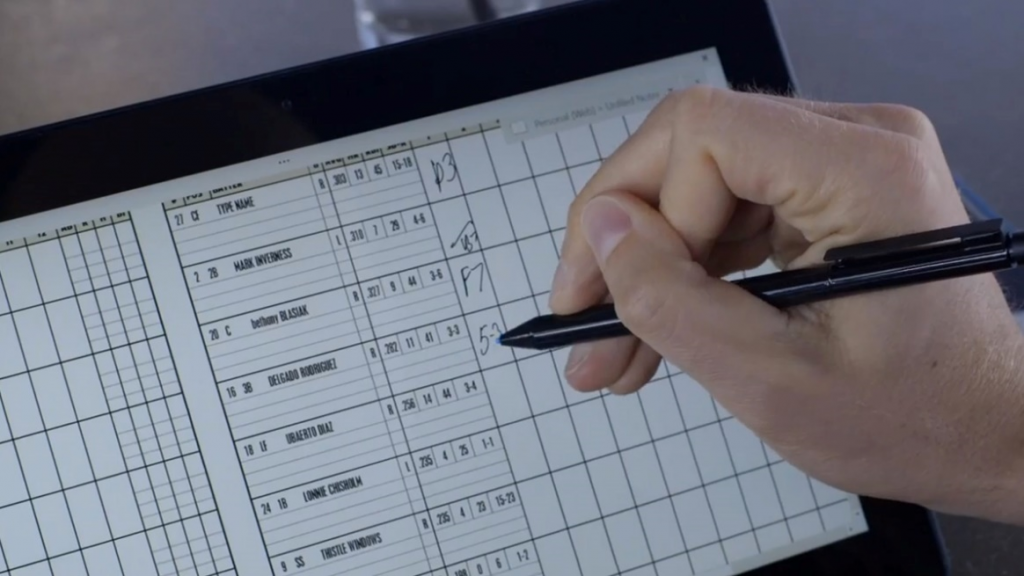 Joe Block keeps his scorecard of the game by hand in OneNote.

In addition to your careers, how do you use OneNote in your personal lives?

Joe – In the same vein, I use OneNote and its checkbox when I go to the grocery store—bananas—I just check the box once I pick up the bananas. So it could be as detailed as you want it to be.

Scott – As you well know we’re on the road all of the time. There’s a lot going on back at home that I’ve got to keep up with. Whether it’s to pay bills or get babysitters—whatever the case might be—I have all of that stuff in one place in my OneNote. It’s separate from my work notes, but it’s still there all collected in one place and I can take it with me wherever I go. It’s an amazing thing. Have you tried sharing OneNote with your wife?

Joe – She’s learning how to use it and has found it’s really not that hard once you figure it out. For instance, we have a shared notebook with restaurants that my wife and I like here in Milwaukee. Since we can both add restaurants to OneNote—no matter where we are—we always have a list of 10 to 15 restaurants we can choose from on a particular night.

Scott – Somebody told me something once about baseball broadcasting: you don’t have to know everything, you just have to know where to find it. And I think that is one of the great things about what OneNote brings to what we do: We have a place that, we know where it is, and where to go to find it when we need it.