Leveraging the Power of Networks to Help Kids Succeed in School

Communities In Schools (CIS) has always been all about networks. That began with its founding in 1977, when CIS started fostering cooperative partnerships among local businesses, social service agencies, healthcare providers, and volunteers to do whatever it takes to help kids stay in school and succeed in life. In the decades since, its network of professionals and volunteers have teamed up to form the nation’s largest and most effective dropout-prevention organization. CIS has nearly 200 affiliates across the United States serving more than 1.3 million students each year in some of the country’s most challenged communities.

Since 2013, CIS is empowering and enabling its extensive human network by deploying another kind: an enterprise social network. “Technology is one of the things we lean on heavily to help us grow and serve more kids,” says Executive Vice President of Marketing and Communications Matt Heller. “Our new network is one of our most important technological initiatives, since knowledge is power—and Yammer is an effective and inspiring way to share knowledge.”

CIS’s Yammer journey began with three small pilots in May 2013. “Based on those successes, our board of directors easily made the decision to roll out Yammer nationally,” Heller says. “Over the years, I’ve seen a lot of technology rollouts falter as people struggle with how to distribute new resources, or use them to get things done. That wasn’t the case with Yammer.”

Communications Integration Manager Erica Vevurka agrees. “It was easy to transition our resources from our old intranet to Yammer, then get going with our new network by setting up groups so people can share knowledge and work together,” she says. Today, about 41 percent of the organization’s staff nationwide are connecting and collaborating on the enterprise social network.

Listening to and Benefitting from Peers’ Experience 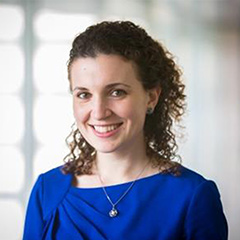 Since CIS is founded on a strong belief in the power of community, one of its chief uses for Yammer is as a platform that lets staff connect and learn from one another, whether they’re at the organization’s headquarters in Arlington, Virginia, or working in a school that’s thousands of miles away. “There used to be some confusion about how and where to share information, but now it all goes on Yammer,” Vevurka says. “We wanted to create a clear and discrete place for internal sharing, and Yammer has quickly become that place.”

For instance, CIS doesn’t have to worry about updating staff directory entries any longer, since with Yammer, the organization has a powerful, interactive directory that allows staff to update their entries themselves and do searches by region or job function. “The network has helped us connect people and share best practices,” Vevurka adds. “It also lets us better communicate our initiatives and ultimately break down organizational and geographical barriers so we can team up for the success of staff—and even more important, students.”

That kind of cohesion is remarkable at an organization as widely dispersed as CIS. “Sometimes we have a couple of site coordinators at a school, but often they’re the only one doing what they do at their particular institution, which means they don’t have peers to talk to and compare notes with,” she explains. “Yammer changes that by giving them a platform for posting questions and quickly getting help from affiliates across our network, including colleagues with considerable experience who’ve faced similar issues.”

For example, a site coordinator recently posted a question asking how others had dealt with fighting in schools. Peers across the organization chimed in, creating an insightful back-and-forth discussion on what worked to curb it—and which approaches were ineffective. That conversation is now archived and searchable for site coordinators grappling with the same issue in the future. “That’s what makes Yammer invaluable for us: It gives each member of staff an entire network of support,” Vevurka says.

Site coordinators have also used the network to link with and listen to each other on other important topics, including strategies for fostering parent engagement and back-to-school programs that promote student enthusiasm and set them up for a successful academic year.

CIS staff aren’t just using Yammer to listen to one another—they’re using it to see their impact in the community. “Because we rely on the generosity of media companies for placement, we don’t always know when and where our campaign materials will be posted,” Heller points out. “But with Yammer on their smartphones, people can take pictures when they see our messages on a billboard or at the mall. They just snap a photo and upload it to Yammer. It has almost become a sport for us—a sport that builds awareness and morale.”

“We want people to not just join our network, but use it,” Vevurka says. “We want them to connect with others and learn from them, so they can better adapt to the ever-changing challenges of fulfilling our mission for kids. When we analyze what people are doing with Yammer, we see some positive results. For instance, there’s a very high rate of people using the search bar. That tells us that people are using the network as a resource, looking for documents and conversations that will allow them to work better, faster, and more efficiently.”

One of those people is Cassie Myers, a CIS site coordinator in Ottawa, Kansas. “Yammer has been a very large part of growing what Communities In Schools is working so hard to do,” she observes. “We are able to share ideas, get help, find support, receive important information about our organization, and learn from Yammer. Those capabilities are imperative when we are faced with trying to integrate ourselves into schools that already exist.”

In April 2014, CIS used Yammer as the springboard for its ambitious Change the Picture branding campaign, which shares the stories of kids who are succeeding in school despite challenging obstacles and provides data on the effectiveness of CIS’s efforts. “Yammer is our one-stop shop for the Change the Picture campaign,” Heller explains. “We’ve created a whole affiliate toolkit that lives on Yammer, complete with customizable versions of assets.”

Soon after the kickoff of the Yammer-enabled Change the Picture campaign, CIS launched another one: a multifaceted digital event honoring the Class of 2014. Billed as the “World’s Biggest Graduation Celebration,” the commemoration connected real-time social media interactions between thousands of students across the nation on their graduation day. Students—along with their teachers, friends, and family—shared graduation-day photos, videos, and messages on Twitter, Instagram, Facebook, YouTube, and Vine, using the hashtag #ClassofChange. The social effort, which will be repeated in 2015, created the world’s largest graduation processional, telling a powerful and moving story of how students, families, schools, and communities are helping change education in America.

CIS’s board of directors has been so impressed by the many benefits flowing from the organization’s network, it has begun using Yammer as well. “Board members suggested they should be on Yammer themselves, so we created the Sounding Board, a private group for the board and our executive leadership,” Heller says. “Everybody’s on it now, and people are starting to use it as their primary platform for communication and information-sharing. I’m seeing a reduction in emails as Yammer is becoming our board’s communication and management tool.”

He adds, “From our board of directors to site coordinators out in schools, Yammer lets us all work like a network. That makes us more effective in our mission of helping kids attain brighter futures.”