Today’s post was written by James Gill, grade 6/7 teacher in SD43, Coquitlam, BC.

I wanted students to be able to work online so that they could access their work from both school and home. Ideally they could access it anywhere. I wanted to take advantage of spellcheck for my many students for whom English is not their first language. I wanted to make editing their writing something that could be accomplished easily, especially for my students with learning disabilities. I also wanted to make it possible to take advantage of the many resources on the Internet, while at the same time teaching students how and why they need to cite their sources.

But in order to accomplish this I had to tackle a few questions:

What do I do when not every kid has a device?

What do I do when not every device is the same?

I began the year by having students bring their devices. It had to be a device they were allowed to bring to school on a regular basis, and their parents needed to sign the BYOD permission form. What I got was a lot of different devices. Some brought laptops, both new and old. Some brought iPads, including a few iPad mini’s. There were two Microsoft Surface 2’s and a few Samsung Galaxy tablets. One girl could brought her phone. 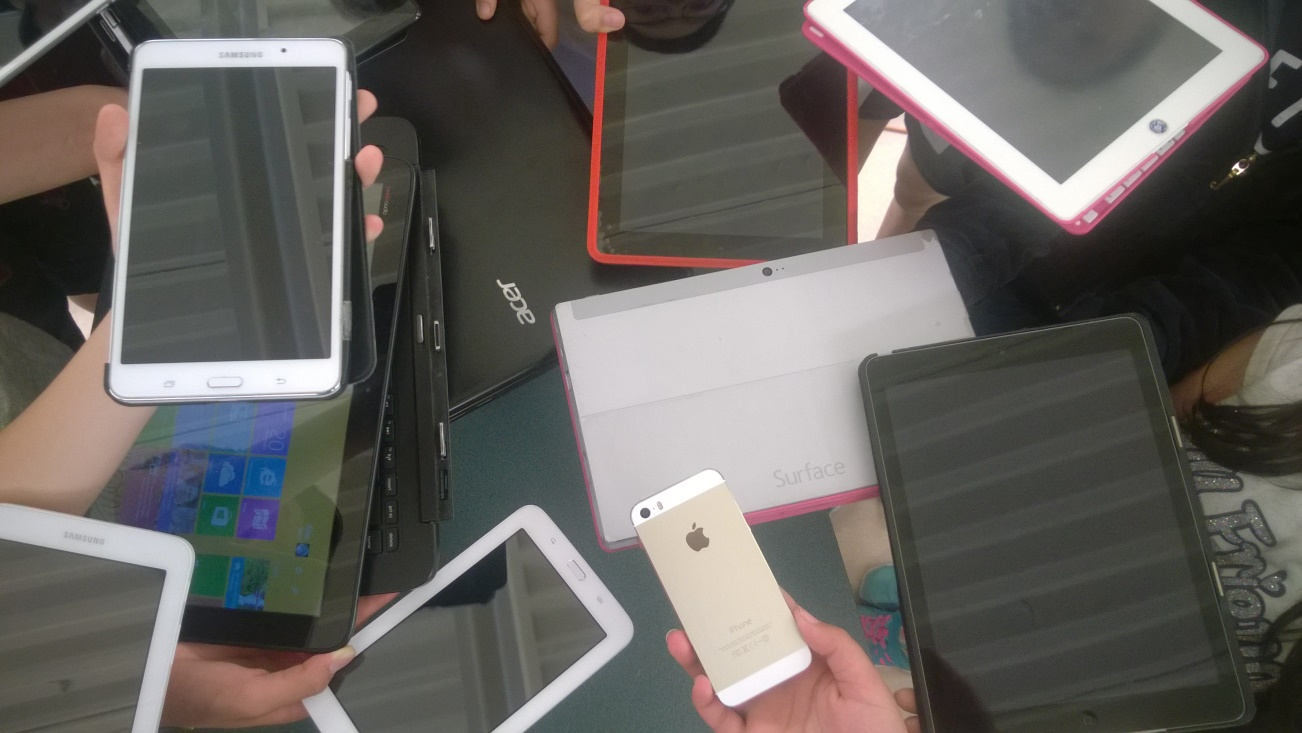 In my inventory, I had two, then three refurbished desktops, and then later I got a couple of Chromebooks on loan. I also had a first generation Surface RT, on which I set up local accounts for several students. 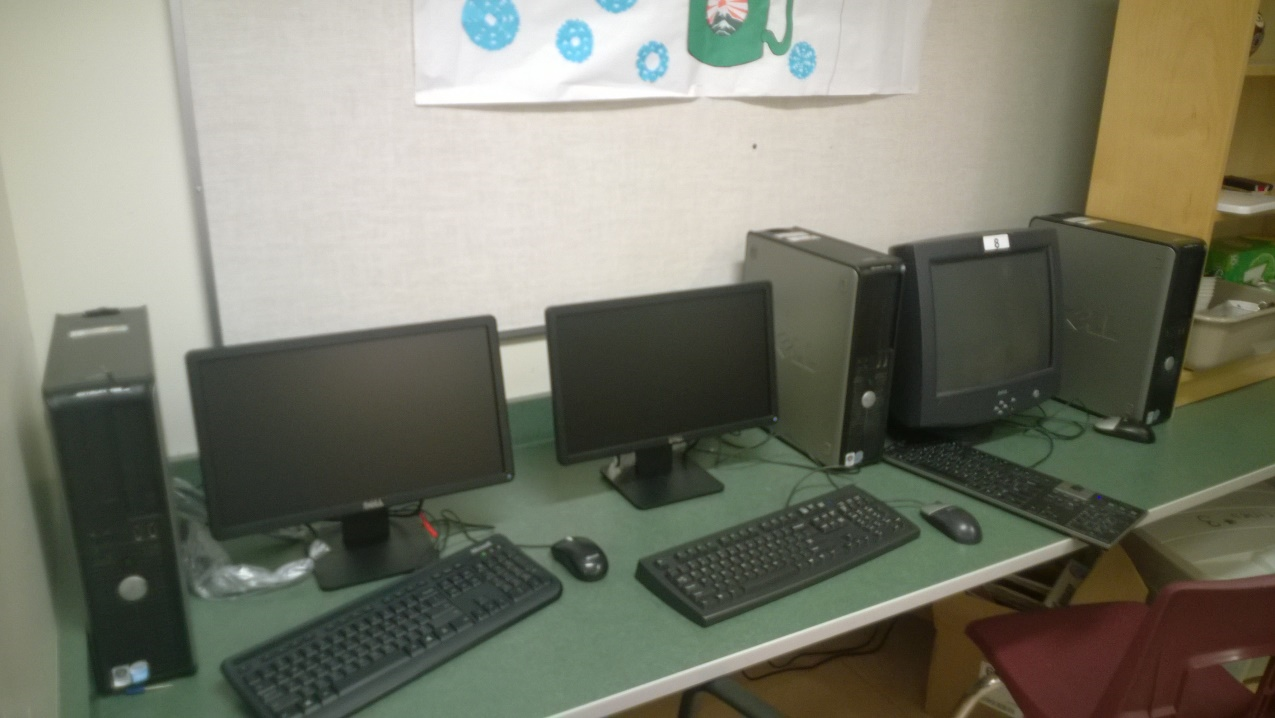 In an effort to get kids to develop a sense of ownership over their work, and to feel like they had some say in their learning, I implemented the Genius Hour program. Students would get some of their week to research their own inquiry question. I taught them how to ask a question that could not be found by just searching the web. I was astounded with the great questions they came up with:

I had the good fortune of being included as a part of the Office 365 trial in my district. I created an account for each student and then I used the OneNote Class Notebook to post a link to the student notebooks on my website.

Signing in was easy, and students began downloading the OneNote Class Notebook so they could launch OneNote on their device. Now that OneNote is free on all platforms, all my students could access it, and use it on whatever device they had. Those students, who didn’t want to download the app, could use the web-based version. We preferred having the work open in the app on the device, because this mean it would use less bandwidth as compared to using a web only tool.

I taught my students how to use the Clipping tool first. It saves them a lot of time and trouble as clipping allows them to grab both pictures and text, and automatically records where they found their work. Now they can easily cite their sources as they go, and realize the importance of using other people’s ideas to support theirs—without claiming them as their own. 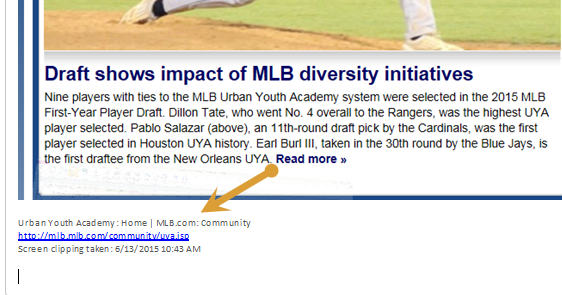 When it came time to give feedback, I used OneNote’s Insert > Record Audio option to record my feedback as an audio note right into their work. In 30 seconds I can give better feedback than I could in the same amount of time if I wrote their comment. I also know that students of this age have higher listening comprehension than reading. I don’t tell my students their mark, but invite them to come find out. When they ask me, “What was my mark?” I ask in return, “First, what was my feedback?”

For the last three months, I have been putting most of my work in the Content library, and teach almost all my lessons from there. As I am new to my grade, I didn’t have a lot of resources, so I have been creating my teacher notebook with the aid of Office Lens on my phone.

The Office Lens app allows me to shoot content directly into my OneNote notebook. From there I put my assignments and lessons into the Content Library. This is a section that all kids have read-only access in their notebooks. They can copy the page with a single right-click to their own notebook and get started with their work right away.

Some of my students have begun working in OneNote at home on a desktop PC or Mac and then coming to school without a device, (because they don’t own a laptop or mobile device they can bring school) and then looking to me to solve the problem. They prefer to work in OneNote, and are hopeful that I can find a way to help them keep working online on any device! What a great problem to have with a relatively easy solution for me.

Next up is for students to collaborate together online. In the Collaboration section, all students can write on pages together. My students are going to be working in pairs to use what they have learned about Simple Machines to work for several days on a Rube Goldberg machine.

We plan to use OneNote to store students sketches (some students may sketch directly into OneNote if they have a touch screen device), and create step-by-step plans, lists of who will bring recycled materials and then share their ideas with others.

Another feature in OneNote I am taking advantage of is “Translate.” I have a high population of non-native English speakers, and whenever someone needs to open a browser, or get a translation dictionary, they are more likely to just guess at the word, rather than make the effort to look it up. By having translation built-in, I can reduce the number of clicks it takes for a student to go from “Hmmmm” to “Aha!”

I am very lucky to have been a part of this project, as using OneNote Class Notebooks allows me to teach in ways I couldn’t before. My students have benefitted, and I know that they have learned some skills that they can use to help them now and in the future.