Today’s post was written by Douglas Wills, professor of Economics at the University of Washington.

In the spring term of 2015, I organized the Intermediate Microeconomics course at the University of Washington, Tacoma using Microsoft’s new OneNote Class Notebook. Over 50 students were enrolled for the mathematics-based course. The OneNote Class Notebook created for the class worked exactly as advertised. Each student had a private tab, access to all class material, and the syncing worked flawlessly. Some students used the online version, some the desktop, and virtually all of them accessed the notebook via multiple devices. However, there were three things that made the use of OneNote outstanding and will keep me coming back to it for future classes.

OneNote as the classroom whiteboard

I’ve used the “inking” feature of Tablet PCs in the classroom since tablets first came out over a decade ago. Using programs such as Windows Journal or PDF Annotator, all my lecture notes are written on the tablet, projected on the classroom screen, and then saved to be distributed to students (typically in PDF). Two of the big advantages of this technique are that I’m always facing the students when lecturing—even when writing—and the students get a perfect record of everything written in class. Thus, a student can stop worrying about writing down every equation or sentence precisely and can focus on the points being made in the lecture.

Using OneNote improves on this, especially with the Surface Pro 3, which I now use. By writing directly on a page in OneNote, the lecture notes are automatically synced to every student’s notebook within seconds. This means that immediately upon the end of class, all students (even the ones who did not attend) have the notes in their OneNote Class Notebook without me having to take any additional steps. This allows students to annotate the lectures immediately after class.

The second improvement came from using Surface Pro 3’s built-in wireless function, Miracast. By plugging in Microsoft’s Wireless Display Adaptor into the HDMI input, I was no longer “tied” to the screen control console, which was usually off to the side of the room. Now I could move my computer to a more central location, one closer to the students, or even move the computer around the room. 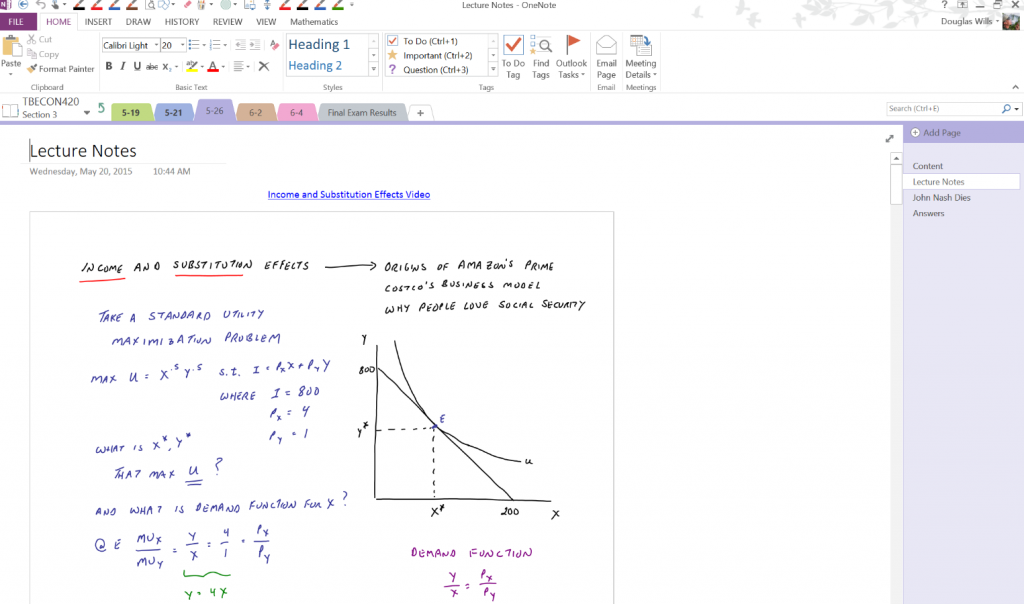 Anyone who has taught upper-level economics classes, especially ones focusing on public policies, knows that a critical part of a successful class is getting news about current affairs (articles, videos, etc.) up on the course website as quickly as possible. OneNote shines in this regard; one can print virtually anything found on the web directly to a specific tab in the notebook. So you can quickly and efficiently direct content to the entire class, groups or specific students. Of course, the same is true for the students, as they can post articles to the Collaboration Space for all students to read and comment on.

Once again, using the Surface Pro enhanced the usability of OneNote. In Economics, one often just wants a table or graph from an article to discuss in class. Capturing only a graph can often be a tedious and time-consuming endeavor—but no longer. Simply by clicking the pen, one can capture any area of the screen and send that information directly to OneNote.

In general, it was much easier to change and upload content. I didn’t have to convert everything to PDF format to upload, or when something had to be changed (due to a typo, etc.), it could be changed directly and quickly. This made the course online content far more dynamic, as it was much easier to post new material. As for content from students, in the past they would have to email me the link and then I would post it using the aforementioned steps. Now the students can do it directly.

As important as the aforementioned benefits of OneNote are, the most important was how it changed my office hours. In a mathematics-based course, with lots of questions, I would usually have students coming to office hours every week to help them with questions. Then, after working through a question on the board or on paper, the student would usually take a picture of the board or ask to keep the paper.

This term I did not have a single student come to office hours, not one! The students quickly learned that a far superior way to have their questions answered was to post it on their private notebook tab and then “tag” it with a question mark.

Each time I opened the course notebook, I searched for new tags. When a new tag appeared, I would click the tag, which took me directly to the student’s question. Of course, at that point I would answer the question, usually writing out the answer with the Surface pen. But what made this format truly superior was using the built-in recording function of OneNote. As I wrote out the answer, I would make an audio recording of my explanation of each of the steps. When the student played it back, OneNote highlighted each step as the student listened to the answer. So not only did the students have a permanent copy of my answer, they also had a recording of my explanation.

Accommodate any teaching and organization style

While these benefits were huge for an upper-level economics course, the value of the benefits will vary depending on the type of class. I think the true power of using OneNote is that it accommodates any teaching style—standard PowerPoint-based lectures, flipping, hybrid or interactive question-and-answer, of the type I use. In addition, it is ideal for writing-based courses or courses with significant group work. The professor has the ability to create a password-protected “group tab” that only group members have access to, in addition to the professor.

Now that I’ve used this format for an entire class, I’ve realized another significant benefit. It gives me an easy way to organize all my course material. By creating a duplicate notebook, I can store all the notes, questions, videos, etc. in one place. Then, using that notebook when I teach the course again, I can easily incorporate changes and control how information is released in the new class by simply copying pages to the new course notebook.

For those professors reluctant to invest time in new tools, their familiarity with Office makes the implementation of OneNote virtually painless. And now that Microsoft has announced that the OneNote Class Notebook will be integrated with Learning Management Systems (LMS) such as Canvas and Blackboard, the faculty member has the best of both worlds.