Editor’s note 8/17/2015:
The blog post was updated to reflect the upcoming availability of Skype for Business in 2016.

Editor’s note 7/28/2015:
We updated this post to reflect that support for Arabic, Hebrew and Thai language documents on iPad and iPhone was delivered on July 23, 2015. The Office apps for iPad and iPhone are now available in the Office App Store in Arab countries, Israel and Thailand.

The response to last week’s release of Office 2016 for Mac has been amazing—thank you to all our customers! The post was one of the most read and shared Office Blog posts this year, receiving hundreds of great comments and questions. We thought it would be helpful to share the top questions and answers with you.

2. When will Office 2016 for Mac be available for people and businesses who don’t want a subscription?

For consumers, Office 2016 for Mac will become available as a one-time purchase option in late September.

Additionally, MSDN subscribers will also be able to get the new Office for Mac in September.

3. When will the Office 2016 for Mac preview stop working?

We are extending the use of the Office 2016 for Mac preview until the end of October, in large part based on your feedback.

Originally, we planned to let the Office for Mac preview expire on August 9, 2015, 30 days after launch. However, several customers commented that this was before the availability of the one-time purchase version in September, leaving some preview participants without Office 2016 for weeks. As a result of this feedback, we are extending the life of the preview until the end of October. This will give preview participants about one month to move to Office 2016 as a one-time purchase, or over three months for those who want an Office 365 subscription.

Yes, you can use them side-by-side on the same Mac. And by the way, here’s how you add the app icons for Office 2016 to the dock.

OneDrive for Business will be available before the end of the year and Skype for Business in 2016. Stay tuned to the Office Blog if you want to participate in the preview of Skype and OneDrive.

6. I have a technical problem. Where do I go?

The best place to start is support.office.com/home/contact. Otherwise you can let us know if there is something you like or don’t like by clicking the “send a smile/frown” right from within Word, Excel, PowerPoint, OneNote or Outlook. 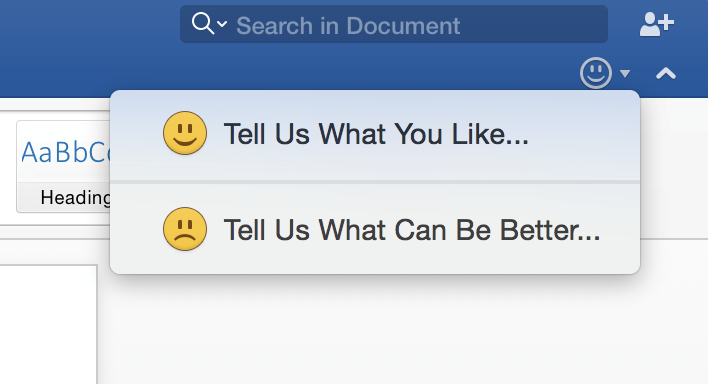 7. How can I request a new feature?

8. I’m having problems with Outlook connectivity and reliability. What’s happening?

A number of customers reported hangs or crashes in Outlook 2016 for Mac. The Outlook team is aware of these issues and has identified two specific issues along with their root cause. In one, a small subset of customers saw frequent crashes due to some optimization work that the Outlook team was performing. The other involved hangs for customers with multiple IMAP or POP accounts. Fixes for both issues will be released this week, and customers will be automatically notified by Microsoft AutoUpdate.

We’ve also heard the requests for Gmail and iCloud calendar and contacts sync. We’ll be adding these and other feature requests through monthly updates. Stay tuned to the Office Blog for further updates as we finalize our plans here.

9. What are your plans for Visual Basic support?

Existing macros continue to work in Office 2016 for Mac. When accessing local files, you may encounter permission prompts due to Mac OS X sandboxing. We’ve added methods to the object model to allow you to update macros to minimize the number of prompts.

Office 2016 for Mac provides a simplified Visual Basic Editor (VBE) for viewing/debugging existing macros. We recommend that customers develop macros or VB add-ins in Office for Windows and use Office for Mac to debug if needed. We will continue to ensure compatibility of existing macros and make improvements to the IDE. In the future, we will include the new web-based add-in model in Office for Mac products, which work across devices and platforms, giving add-in developers a modern web development experience. These new add-ins are already available in Outlook for Mac today and will come to the rest of Office for Mac over time. They are available today for Office for Windows for Word and Excel on iPad.

10. When will Office 2016 for Mac be available in Arabic, Hebrew and other right-to-left languages? What about other languages?

We’ve heard your feedback and questions about right-to-left (RTL) language support. We are committed to doing RTL languages for Office for Mac. We are currently working through timing and will communicate our plans when we have a clearer sense of the timeline.

Support for Arabic, Hebrew and Thai language documents on iPad and iPhone was delivered on July 23, 2015. The Office apps for iPad and iPhone are now available in the Office App Store in Arab countries, Israel and Thailand. And we will release additional updates for RTL languages shortly after the iOS 9 release.

More broadly, Office for Mac is currently available in the following 16 languages: Simplified Chinese, Traditional Chinese, Danish, Dutch, English, Finnish, French, German, Italian, Japanese, Norwegian, Polish, Brazilian Portuguese, Russian, Spanish and Swedish. And Office 2016 for Mac is available in all countries where Office 365 is available except for Turkey. Office for Mac will be available in Turkey in September when the Turkish language version is ready.

Thank you again for the incredible response to Office 2016 for Mac. The team is already hard at work on the first update for Office 365 customers. We’ll share more information soon. Please keep sending us your questions, feedback and suggestions—it’s very helpful as we prioritize the backlog to create the best Office for Mac experience for you!

Microsoft Teams has become the new way to work for over 115 million daily users who come together every day to meet, call, chat, and collaborate. Today, we are honored to be recognized by Gartner as a Leader for both Meeting Solutions and Unified Communications as a Service in their latest Magic Quadrants. Microsoft was…

For one week only: 25 percent off Microsoft 365 Business Premium for small and medium-sized businesses

We recognize that 2020 has been a challenging year for small businesses, and we are here to help. In celebration of Small Business Saturday, we are offering small and medium-sized businesses in the United States a 25 percent discount on up to 25 seats of Microsoft 365 Business Premium so they can chat, call, host…

Since the outbreak of COVID-19, it’s become a challenge for many of us to balance the various aspects of our lives. Whether it’s our jobs, homeschooling our kids, or coordinating virtual meetups with friends, managing all of this on a daily basis can get stressful. As a result, tools that help us stay on track…