So far, we introduced you to our new chart types across Office 2016 and then dove deeper into a few of them. We showed the effectiveness of the Waterfall chart in visualizing financial statements and how hierarchical chart types, like Treemap and Sunburst, can help you explore complex data with multiple levels and categories. Now, we will take a closer look at the last group of new chart types—statistical charts.

Statistical charts, which include Histogram, Pareto and Box and Whisker, help summarize and add visual meaning to key characteristics of data, including range, distribution, mean and median. There are many different approaches and opinions on how to summarize statistical data. In this blog article, we will explain how these new charts can help represent your statistical data in a way that works best for your needs. Download the Office 2016 Public Preview and try out the new charts for yourself using our sample data sets. 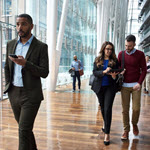 Best-in-class productivity apps with intelligent cloud services that transform the way you work.

The Histogram chart shows the distribution of your data and groups them into bins, which are groupings of data points within a given range. To show in an example, imagine we run a small bookstore and have a list of our entire selection of books and prices. 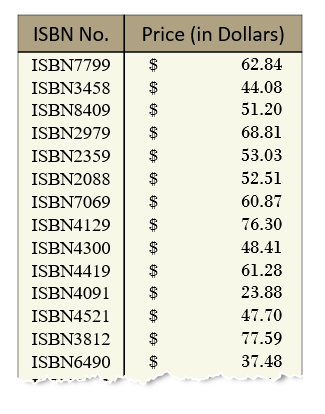 The Histogram, Pareto and Box and Whisker charts can be easily inserted using the new Statistical Chart button in the Insert tab on the ribbon. The Histogram chart is the first option listed. 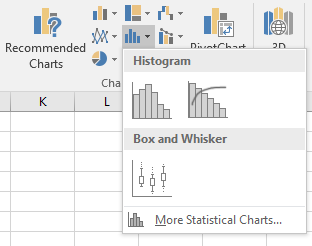 By creating a Histogram to visualize the above table of data, we can count all the books by bins that represent price ranges. For example, notice that we have grouped all books that are above or equal to $19.95 up to, but not including, $28.95 into one bin. The next bin groups and counts all the books above or equal to $28.95 but less than $37.95 and so on. Notice this grouping as shown in the image below. 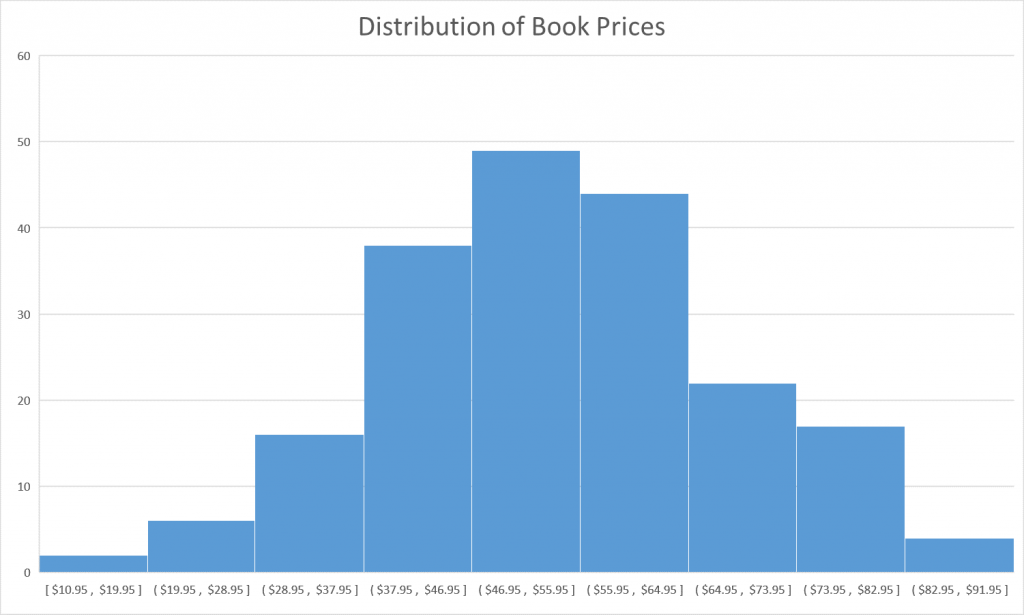 In our design, we follow best practices for labeling the Histogram axis and adopt notation that is commonly used in math and statistics. For example, a parenthesis, “(“ or “)”, connotes the value is excluded whereas a bracket, “[“ or ”]”, means the value is included. So for a bin that groups all the books above or equal to $10.95 but below $19.95, the axis label would look like: [$10.95, $19.95]. In the example above, the first bucket to the left has the label [$10.95, $19.95], which should be interpreted as all values between $10.95 and $19.95, inclusive. This set notation offers the cleanest layout and prevents a cluttered and verbose horizontal axis.

In case you’re interested in how we determine the default and automatic bin sizes for the Histogram, we chose to use the widely accepted Scott’s binning algorithm, which calculates the optimal bin size as follows:

If you want to specify a custom value for bin sizes or create an overflow/underflow bin that groups all the points above/below a certain value, double-click the horizontal axis in your Histogram chart and change the options in the Format Axis task pane. 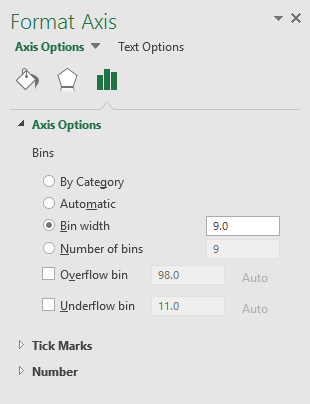 You can gain insights by tweaking the size of the bins. For example, a bin size of 9.0 provides the bell-shaped curve or normal curve, which is seen in the example above. This curve in data is often found in nature, like in measuring the heights of people in a population, recording the IQ scores of a sample of students or determining deviations of a standardized product. At first glance, these book prices also follow a normal distribution. However, by decreasing the bin width to 6.0, the bell-shaped curve breaks down and we quickly notice that books within the price range of [$52.95, $58.95] are fewer than those books in other mid-range prices.

The Pareto chart is useful for figuring out the most significant factors in your data and how they contribute to the entire set. Often used in quality control, the Pareto chart helps easily identify the high use cases, focusing on the big picture, rather than getting lost in the details. The Pareto chart is named after Vilfredo Pareto, most famous for his popular eponym, the Pareto Principle, also known as the 80-20 rule. His principle states that a few reasons (about 20 percent) account for a majority (or about 80 percent) of issues. The Pareto chart shares similarities with the Histogram chart in that each chart displays bins that count the frequency of occurrence. However, for Pareto, the bin is categorical and not a range of values. What also makes the Pareto chart unique is its combination of columns with a line graph, which shows the cumulative contribution of each column as you move from left to right. Looking back at the bookstore example, we have data that lists all the store returns and the underlying reason, whether it was due to defects, incorrect pricing, wrong book, or a host of other causes. 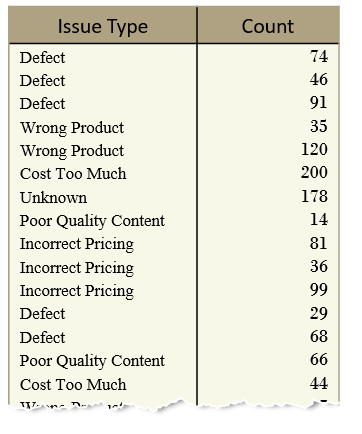 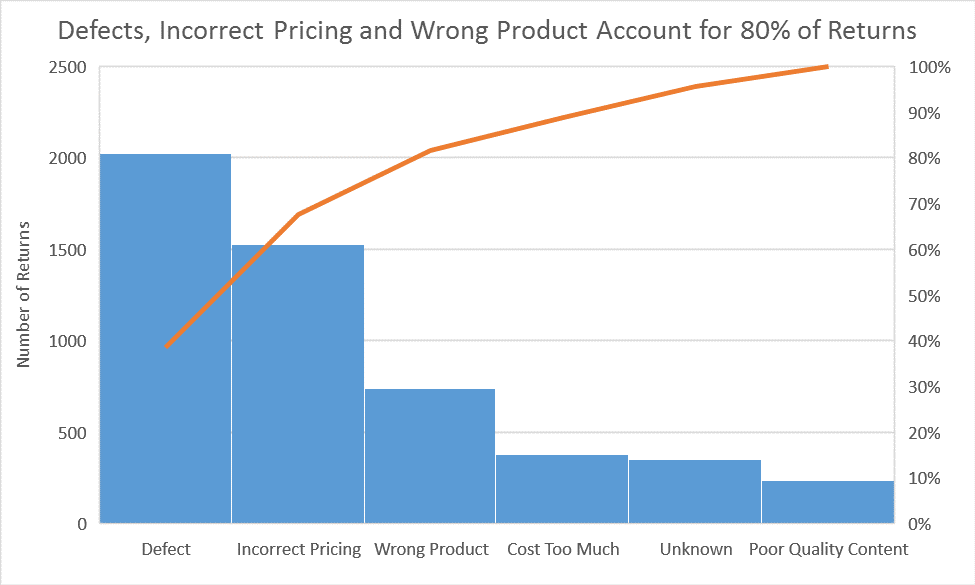 The Pareto chart is useful for discovering areas for improvement or maximizing where the bookstore should allocate its efforts. Targeting improvements to defects and incorrect pricing are more worthwhile than adjusting prices (Cost Too Much) or variety of books (Poor Quality Content).

Box and Whisker characterize the distribution of data

The Box and Whisker chart is designed to quickly and easily highlight important characteristics related to the distribution of your data, by providing basic statistical details like mean, median and percentile groupings, as well as illuminating outliers that exist beyond the general clustering of your data. Additionally, this chart is useful for comparing characteristics between different sets of data. Histogram and Pareto can only provide visualization for one. To illustrate these features, let’s use the bookstore data and we’ll start with a table of book prices within each genre. 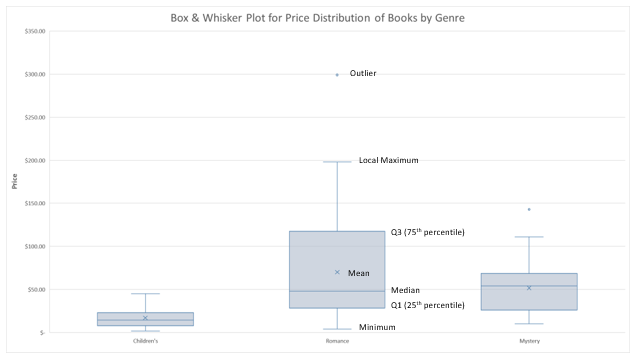 How statistics are used in Box and Whisker

The Box and Whisker chart (above) is helping us visualize statistical characteristics about three separate categories of books—Children’s, Romance and Mystery. Notice that each group is divided into four sections, including a rectangle (the “box”) that is split into two parts and thin T-shaped projections on each end (the “whiskers”). The bottom whisker is called the “Local Minimum.” Just above the whisker is the bottom of the box, which marks the “first quartile.” The values in between the end of the whisker and the bottom of the box are considered part of the lowest quarter of values in the data set. In other words, any book prices found in this section of the visualization are considered part of the lowest 25 percent of the entire collection of prices for that category.

The median represents the value that is in the middle of the entire set of data, after the set has been sorted from smallest to largest. For example, take the following set of numbers:

The median is 7. If this series of numbers were visualized in a Box and Whisker chart, the line drawn in the middle of the box would be at 7.

Outliers are points on the Box and Whisker chart that are displayed beyond the end of each whisker. Notice there is an outlier book price within the Romance category. For outliers, we designed the Box and Whisker chart to follow the Tukey industry standard, which states that values are considered outliers only if they lie 1.5 times the length of the box (known as the interquartile range) from either end of the box. The diagram below shows the threshold point to be considered an outlier.

Calculating first and third quartiles with the median

When to use each chart?

All three new charts provide powerful and easy ways to visualize your data through a statistical viewpoint. However, each chart has unique values that may be useful for different scenarios.

What do you think?

We just went through the inner workings of each of these statistical chart types and how you can take advantage of each one. Try them out for yourself and let us know what you think. We have finished introducing each of our six new chart types. Download the Office 2016 Preview for Windows to learn more about these new chart types now.

If you have any comments or questions, please feel free to leave them below.