Editor’s Note 2/9/2016:
Based on customer feedback, we’ve changed how we refer to our update branches. The name changes are as follows:

Only the names are changing. The servicing model for each of these channels remains the same. We are in the process of updating our content, so you will continue to see the previous naming during this transition.

In March, we announced the Office 2016 IT Pro and Developer Preview. Since then, we’ve been listening to your feedback and continuing to build, refine and improve Office 2016 for Windows. This is a seminal release for Office and one you won’t want to wait to deploy to your users, and thanks to the many new IT management enhancements, you don’t need to wait!

You may have heard the rumors, but today I’m happy to confirm that Office 2016 will be broadly available starting on September 22nd. If you have a volume licensing agreement in place, you can download Office 2016 from the Volume Licensing Service Center starting October 1st.

This post is your one-stop shop for the tools, guidance and resources needed to get ready for Office 2016. We’ve enhanced the upgrade and installation experience, and for Office 365 subscribers, we’ve made changes to how the 2016 apps are updated moving forward. We’re also delivering new tools and resources to help you prepare, deploy and manage Office.

Improvements to the Office update model

For customers who currently use Office 365 ProPlus, (the subscription version of Office apps for companies and organizations), you can continue to receive monthly feature and security updates just as you have been over the past few years. Moving forward, this always up-to-date approach is called Current Branch and means that you always have the most current Office apps and capabilities deployed. The next Current Branch will release on September 22nd and will have all of the new Office 2016 app updates included.

Based on feedback from many organizations running Office 365 ProPlus, I am excited to announce that we are adding a new option for updating Office called Current Branch for Business. If your organization typically waits a few months prior to rolling out a new version of Office or needs more time to test Office 2016 and your customizations between feature updates, this will be welcomed news.

Consistent with Windows 10 approach, the new Current Branch for Business update model delivers three cumulative feature updates per year, while continuing to offer monthly security updates. You’ll see the first Current Branch for Business build in February 2016—which is effectively the same feature set as the September 22nd release, but with four additional months of security updates also included. This tri-annual update model offers an additional way for Office 365 ProPlus to stay current moving forward. You can find out about the new servicing options on TechNet.

Note: For Office 365 Personal and Office 365 Home users, you can start installing 2016 apps on September 22nd from office.com, and automatic updates will begin rolling out in October—so this new tri-annual update model is purely for our organizational subscribers to Office 365 ProPlus.

More IT capabilities in the new Office

We’ve also addressed a number of the other top IT requests in Office 365 ProPlus, including deployment support for Background Intelligent Transfer Service (BITS) to help control network traffic when deploying updates and new reports on Office activation and usage available in the Office 365 admin portal.

Beyond the new deployment and management options, the new Office also adds support for Data Loss Prevention across the Office 2016 apps, Multi-factor Authentication and other mission critical control capabilities.

Also, back in March we pledged our commitment to compatibility with your existing Office customization by not making changes to the extensibility model for macros or add-ins. If you’ve been evaluating the preview, you would have seen that most of the tools and processes for managing and deploying Office 365 ProPlus (15.x) versions are very consistent with Office 2016. In August, we published guidance for updating Office 365 ProPlus to the Office 2016 version and kicked off the Office IT Pro Deployment Script project.

If you haven’t checked out the new Office capabilities, it’s time! Speaking of which, let’s talk about all of the ways to get ready for Office 2016…

In November, we’re kicking off a new IT and developer-focused event series—the Microsoft Cloud Roadshow—where we’ll provide free, two-day technical trainings in 12 cities around the world for topics spanning Office, Azure and Windows. These are free to attend, and we’ll be bringing top engineers from Microsoft to lead the training sessions. Registration is now open for the in-person events, and coming soon, we’ll publish the presentations for on-demand viewing along with hands-on labs and additional training resources. 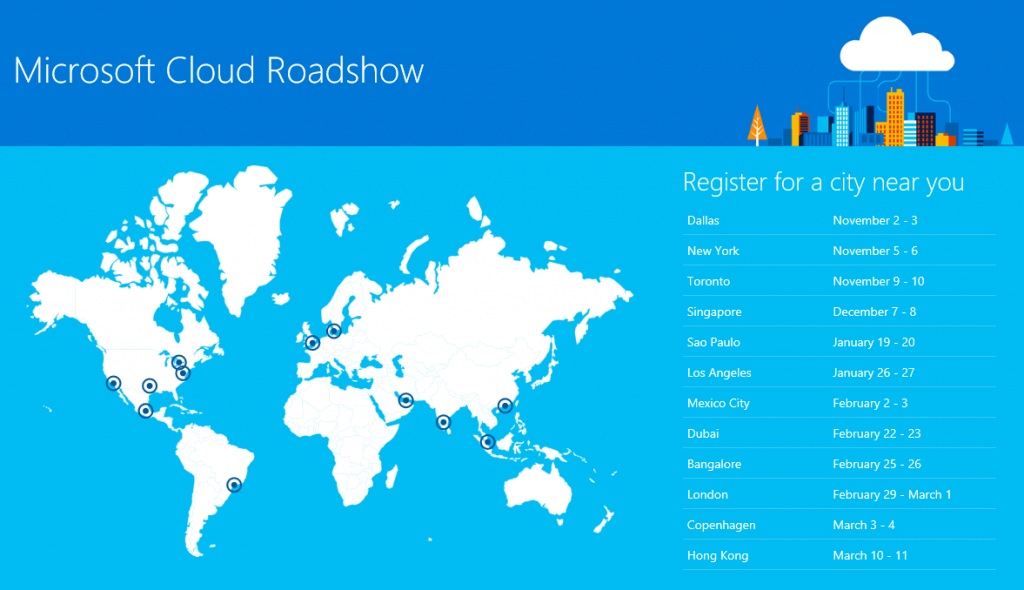 The Office 365 Community is also a great place to go if you have questions about Office 2016; the experts from Microsoft, our MVPs, and the broader community are all there to help. We’ll be promoting Office 2016 on the network in the coming weeks and will have a YamJam with the Office engineering team on September 24th to answer your questions following the September 22nd release.

Check back on September 22nd

This captures a few of the highlights of what we’re working on to support admins with the upcoming Office 2016 release. You’ll see a lot more coming on September 22nd and beyond. Of course, you can still download the Office 2016 Preview now to experience what’s coming, and don’t forget to register for a Microsoft Cloud Roadshow near you to learn more.