Chatting with the Author of ‘It’s Complicated’ 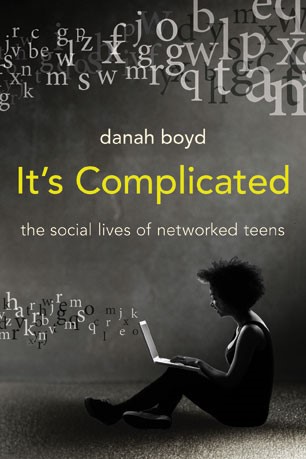 The front cover of It’s Complicated: The Social Lives of Networked Teens, the new book by social-media expert danah boyd.

“Microsoft Research provides an interdisciplinary environment in which researchers can pursue basic research in a variety of areas,” she says. “Our thriving Social Media Collective, including sociologists, anthropologists, and communications and policy scholars, interacts with computer scientists who understand the structure of the Internet and the web, the security protocols, and the algorithms that enable online interaction.”

“This environment leads to a holistic view of social media that informs and advances danah’s research agenda. Of course, we also are thrilled to support her fieldwork with teenagers, which reaches beyond the confines of the online world.”

That research, Chayes adds, is important for Microsoft—and others.

“Microsoft derives incredible value from danah’s research on teens and their online practices,” Chayes says. “There’s a lot of speculation and misinformation on what teens are seeking in their online experiences—how they view privacy, how they connect with each other. Danah busts those myths wide open by actually spending time interviewing teenagers from different backgrounds, on their home turf. Her groundbreaking work informs parents, legislators, and, of course, Microsoft. The more we understand about how teens interact, the more we can ensure that our products enhance these interactions in positive ways.”

As boyd enters a vortex of publicity-related activities accompanying the release of It’s Complicated, she found time to chat for a few minutes about what she does and how she does it:

Q: You wrote your Ph.D. dissertation on networked teens, and now, you’ve followed up with your new book. What have you learned in the interim?

In particular, the chapters on privacy and bullying are based wholly on new data. With each of those topics—like the rest of the topics in the book—I started with a particular cultural anxiety and tried to tease out what was actually happening, what people thought was happening, and where there was a gap in understanding. So, with bullying, I started out by asking how the Internet had changed bullying. And with privacy, I started out with the question: Is privacy really dead for teenagers?

I had fun writing those chapters because, as might be expected from the title of the book, what’s actually happening is more complicated than what people think.

Q: Will people be surprised by what they read?

boyd: It depends on who is reading. Whenever I give these arguments to teenagers, they look at me incredulously and respond with something akin to “Like, duh!” For them, everything that I say is obvious. But that’s the point. Most adults, on the other hand, find the arguments and data to be surprising because they hadn’t thought about an issue that way.

As much as I would be delighted to have teen readers, I see this book as being on behalf of teens for an adult audience. My hope is that it forces the reader to think, even if it’s not surprising per se.

Q: In researching the book, what surprised you the most?

boyd: When I started on this project, I genuinely did expect things to be quite different because of the Internet. My teen years were definitely transformed by my engagement online. I still think of the Internet as my saving grace. But when I dived into the research, I quickly realized that most teens were simply engaging in practices online that were an extension of what they would historically have done offline.

I should also note that I began this project before the fear mongering and handwringing over social media began. Having not experienced the drumbeat of fear mongering around the Internet, I was taken aback by how many journalists, parents, and educators bought into hyped-up stories that had no basis in data. I’ve definitely recognized the patterns since but, in 2005, I was really surprised by how anxious and fearful folks could get.

Q: Despite your wealth of knowledge about this issue, you don’t provide parents any tips or how-to advice. Why not?

boyd: This book isn’t a how-to guide. I know plenty of parents who just want to be told what to do so that their kids will be fine, but parenting doesn’t work like that. Parenting isn’t a set of guided exercises or formulas, and, as a researcher, I felt like it was irresponsible for me to pretend otherwise. Parenting is a practice that requires constantly assessing your values, making sense of your child, and reiterating your actions, decisions, and approach. What I want parents to get from this book is a way of thinking, not a set of tactical steps to take. I realize that this won’t work for some folks, but my hope is that the audience for this book will be willing to step back, listen, learn, and reflect.

Q: You emphasize the importance of conversation and having the right conversation. What do you mean by that? What conversations do you hope this book sparks?

boyd: Conversations are more than information transfer. They’re a mechanism by which humans relate and bond. They’re how families are strengthened and society is constructed. New stimuli like technology often become the center of the conversation, distracting journalists, parents, and educators. The key is to not let it. Instead, my hope is that folks will come away poised to think about what kind of society, family, and community they want to be a part of and what steps they can take to move toward that. This requires really thinking about the role youth plays and how youths can relate to the world around them.

Q: How do you go about performing your research?

boyd: I’m an ethnographer by training, and while I regularly employ a variety of quantitative, qualitative, and content-oriented methods, the bulk of this book is based on data that I collected in a pretty traditional ethnographic fashion. I spent time in a variety of communities in 16 different U.S. states, hanging out where teens gathered, interviewing teens, and observing their interactions, both through technology and in unmediated situations. I also talked with parents, teachers, librarians, and other adults who work with youths. And I kept iterating until the refrain that I heard was too obvious to ignore.

Q: What’s next on the horizon for you?

boyd: I’m about to embark on an entirely new project. I’m creating a new think/do tank in New York City called the Data & Society Research Institute. The goal is to help bring together people from a variety of communities to build the knowledge capacities to address the legal, social, and ethical issues that will emerge as data transform every sector. Right now, I’m playing an executive-director role in this project, but I’m looking forward to working on a bunch of different research projects, including work that’ll examine how networked data complicates any sense of individual ownership or control. I’m really looking forward to this new project, although it’s still in its most nascent of stages.