One glance at the list of topics featured in the CHI 2010 Technical Program is all it takes to understand the diversity of research disciplines that contribute to the field of human-computer interaction (HCI). CHI 2010, the Association for Computing Machinery’s Conference on Human Factors in Computing Systems, brings top HCI researchers to Atlanta from April 10 to 15 for six busy days of presentations, panels, exhibits, and discussions.

CHI challenges participants to advance HCI research with work that supports the diversity of human experiences in computing and empowers people from all walks of life. As a result, the technical papers featured during the conference represent a fascinating mix of approaches that range from new input/output methods, to user behaviors, to applications for specific environments. With nearly 1,000 submissions, review committees had the difficult task of accepting just 365 for presentation. The number of submissions is an indication not only of lively interest in this field, but also the variety of issues that form this area of study.

Microsoft has been involved actively in CHI conferences, both as sponsor and contributor. This year, 38 technical papers submitted by Microsoft Research were accepted by the conference, representing 10 percent of the papers accepted. Three of the Microsoft Research papers, covering vastly different topics, won Best Paper awards, and seven others received Best Paper nominations.

Digital information, especially Web pages, changes quickly and regularly. As a general rule, every year the Web doubles in size and half the existing Web content changes. At the same time, capturing data about change in digital-information artifacts is easy compared with traditional formats, yet existing tools do little to capture, store, or make use of dynamic history.

“Web browsers show Web pages only as they currently appear,” Teevan explains. “And search engines only index pages as seen at the time they were crawled. We started studying Web-content change to learn more about how we could best take advantage of changing information.”

The research team formed a study involving 30 participants and a browser plug-in called DiffIE, an internal tool not publically available. Developed during one of Teevan’s earlier projects, DiffIE caches pages visited by the user, then, when the user returns to a previously viewed page, highlights changes that have occurred. While there have been other tools designed to track changes to Web sites, this was the first to highlight changes so that the user is constantly aware of new content during normal Web interactions. DiffIE made it possible for Teevan and her team to conduct a study to determine how user interactions with dynamic content might change through consistent awareness of Web-content change.

In the study, the researchers asked participants to answer the same set of questions before, and one month after, installing DiffIE. The survey questions were designed to elicit information about: 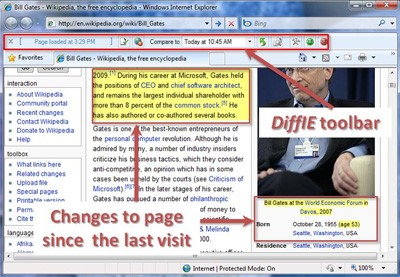 The DiffIE toolbar highlights Web content that has changed since the user’s last page visit.

The researchers also captured free-form responses from participants commenting on the positive and negative aspects of the using the tool. In addition, 17 of the 30 participants allowed their interactions with DiffIE to be logged, yielding data on approximately 25,000 page visits.

The researchers expected users to find DiffIE most useful when it exposed changes people might be seeking, such as changes to news pages, stock quotes, or weather reports. But as it turned out, many Web sites with this kind of information already deliver dynamic content well. For example, a financial site is designed to help users notice when a stock price changes. The team found instead that with DiffIE, participants were using and understanding Web content in unanticipated new ways.

“It was somewhat surprising to us,” Teevan says, “that exposing change seemed to motivate people to revisit Web pages more and, in particular, to revisit those pages that change more often. For example, the number of comments a blog post receives isn’t normally particularly useful information. But if a person is interested in comments and can easily see changes, they might start refreshing pages more often to monitor for new comments.”

In ranking the value of seeing explicit content changes, the most valuable scenario was viewing unexpected but important changes. One user commented that seeing house-price changes on a real-estate site was “really useful.” Another valuable scenario was being able to see expected changes to Web content, such as a news site, and being able to avoid re-reading content. Also valuable was the ability to spot edits to fairly static pages, such as changes on a wiki.

For Teevan, user excitement over DiffIE has been one of the most gratifying aspects of this project. Participants have made many suggestions for expanding its functionality, such as being able to subscribe via RSS to changes on a page or configuring a mobile device to display only content changes.

The DiffIE team is busy exploring other ways to make use of change data. Improving search-engine functionality immediately springs to mind. Sometimes user queries target the static content of a page, and sometimes the user wants dynamic, real-time information. As an example, fans of a rock band normally search for the band’s Web page, fan-club pages, or a Twitter page; in this case, the band’s name would appear in every version of those pages. But when the group does something unusual, such as touring India to give free concerts, fans will want news articles or blog posts for up-to-the-minute information. In such a scenario, the band’s name would only appear in the current version of that news page or blog.

“Knowing how the page changes,” Teevan says, “and, specifically, how terms come and go from the page, can help improve search-engine ranking. We can make use of the fact that some terms appear in all time slices of a page, while others appear in only a few time slices.”

An inspiring project that illustrates the societal impact of communications in rural communities is the subject of Mobile-izing Health Workers in Rural India by Divya Ramachandran and John Canny of the University of California, Berkeley; Prabhu Dutta Das of India’s Dhirubhai Ambani Institute of Information and Communications Technology; and Edward Cutrell of Microsoft Research India. 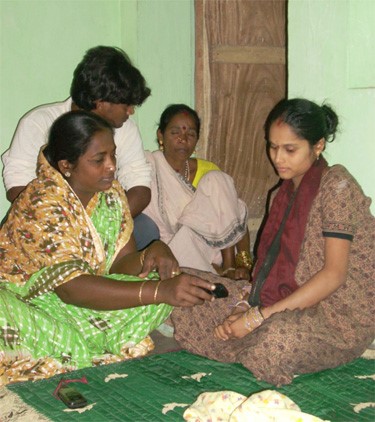 A rural maternal-health worker shows a mobile-phone video to her patient.

Projects for information and communication technologies (ICT) in developing countries face highly stratified power structures, traditional roles and practices that have not changed in centuries, and suspicion of outsiders and government. Such societies naturally resist the new practices required to make best use of new technologies. Instead, the team investigated the potential of ICTs as persuasion and motivation tools for facilitating new practices. After two months of intensive interviews and field work examining the rural maternal-health program of selected locations, the team designed an intervention program based on videos created and played on mobile phones. The program goal was to improve the effectiveness of female healthcare workers, who often have a difficult time persuading pregnant women to utilize health services.

They found that when health workers used or created their own educational videos, all stakeholders in the system became more engaged, and pregnant women became more receptive to using health services. With coaching, health workers found that videos facilitated discussions with patients and that health workers also were motivated by the fun of making and showing a video. Most surprising, health workers were able to recruit influential individuals in a village to participate in the video. As a result, those videos were quite persuasive when shown to patients. The team is examining ways to archive videos and create a health-worker community portal for sharing videos. 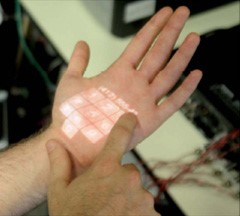 A sensing armband and a pico projector enable interactive elements to be rendered onto a person’s skin.

An input/output method that has generated a lot of attention and a well-publicized video is the technology described in Skinput: Appropriating the Body as an Input Surface by Chris Harrison of Carnegie Mellon University along with Desney Tan and Dan Morris of Microsoft Research Redmond.

The body is portable and always available, and fingers are a natural input device. Skinput is bio-acoustic technology that makes use of the human body as an input surface, enabling the location and vibration of finger taps on hands and arms to be analyzed and used as signals. The paper documents the technology, as well as the capabilities, accuracy, and limitations of the approach, as tested in a 20-participant study.

These projects illustrate the wide range of disciplines active within the HCI community, as well as the diverse nature of HCI work within Microsoft Research, as evidenced by the papers it contributed to CHI 2010:

Other technical papers authored or co-authored by Microsoft Research personnel that were nominated for CHI 2010 Best Paper awards:

What’s Your Idea? A Case Study of a Grassroots Innovation Pipeline Within a Large Software Company by Brian P. Bailey, University of Illinois; and Eric Horvitz, Microsoft Research Redmond.

Other technical papers authored or co-authored by Microsoft Research personnel that have been accepted for presentation during CHI 2010: