By Microsoft Research and the University of Cambridge

Editor’s note: This press release is reprinted with the permission of the University of Cambridge, and is followed by a Q&A with Dr. Jasmin Fisher, a senior researcher with Microsoft Research Cambridge who collaborated on this project.

The human body produces over 2.5 million new blood cells during every second of our adult lives, but how this process is controlled remains poorly understood. Around 30,000 new patients are diagnosed with cancers of the blood each year in the UK alone. These cancers, which include leukemia, lymphoma and myeloma, occur when the production of new blood cells gets out of balance, for example if the body produces an overabundance of white blood cells.

“It provides us with a blueprint to develop computer models relevant to other human diseases including… breast and colon cancer.”

Biomedical scientists from the Wellcome Trust-MRC Cambridge Stem Cell Institute and the Cambridge Institute for Medical Research collaborated for the past two years with computational biologists at Microsoft Research and Cambridge University’s Department of Biochemistry. This interdisciplinary team of researchers have developed a computer model to help gain a better understanding of the control mechanisms that keep blood production normal. The details are published today in the journal Nature Biotechnology.

Results in seconds, not weeks

“With this new computer model, we can carry out simulated experiments in seconds that would take many weeks to perform in the laboratory, dramatically speeding up research into blood development and the genetic mutations that cause leukemia,” says Professor Bertie Gottgens whose research team is based at the University’s Cambridge Institute for Medical Research.

Dr. Jasmin Fisher from Microsoft Research and the Department of Biochemistry at the University of Cambridge, says: “This is yet another endorsement of how computer programs empower us to gain better understanding of remarkably complicated processes. What is ground-breaking about the current work is that we show how we can automate the process of building such programs based on raw experimental data. It provides us with a blueprint to develop computer models relevant to other human diseases including common cancers such as breast and colon cancer.”

To construct the computer model, PhD student Vicki Moignard from the Stem Cell Institute measured the activity of 48 genes in over 3,900 blood stem cells that give rise to all other types of blood cell: red and white blood cells, and platelets. These genes include TAL1 and RUNX1, both of which are essential for the development of blood stem cells, and hence to human life. 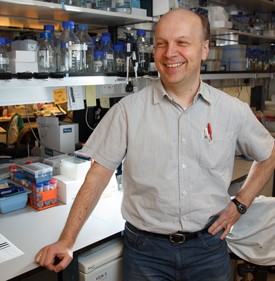 One way the computer model can be used is to simulate the activity of key genes implicated in blood cancers. For example, around one in five of all children who develop leukemia has a faulty version of the gene RUNX1, as does a similar proportion of adults with acute myeloid leukemia, one of the most deadly forms of leukemia in adults. The computer model shows how RUNX1 interacts with other genes to control blood cell development: the gene produces a protein also known as Runx1, which in healthy patients activates a particular network of key genes; in patients with leukemia, an altered form of the protein is thought to suppress this same network. If the researchers change the ‘rules’ in the network model, they can simulate the formation of abnormal leukemia cells. By tweaking the leukemia model until the behavior of the network reverts back to normal, the researchers believe they can identify promising pathways to target with drugs.

Professor Gottgens adds: “Because the computer simulations are very fast, we can quickly screen through lots of possibilities to pick the most promising ones as pathways for drug development. The cost of developing a new drug is enormous, and much of this cost comes from new candidate drugs failing late in the drug development process. Our model could significantly reduce the risk of failure, with the potential to make drug discovery faster and cheaper.”

Dr. Matt Kaiser, Head of Research at UK blood cancer charity Leukemia & Lymphoma Research, which has funded Professor Gottgens’ team for over a decade, said: “For some leukemias, the majority of patients still ultimately die from their disease. Even for blood cancers for which the long-term survival chances are fairly good, such as childhood leukemia, the treatment can be really grueling. By harnessing the power of cutting-edge computer technology, this research will dramatically speed up the search for more effective and kinder treatments that target these cancers at their roots.”

Q and A with Dr. Jasmin Fisher 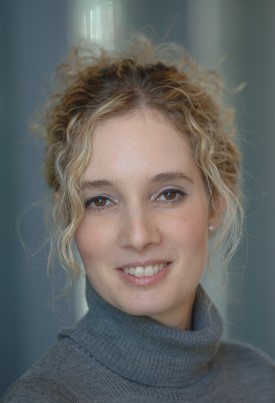 Q: How did you get interested in executable biology?

A: As a biologist, I was always fascinated by the question of how cells make decisions to develop and behave in a certain way. I think about these decision making processes as programs that cells ‘execute’ in order to do the basic functions of life, such as divide, die, migrate, become a muscle cell, a blood cell or, in disease conditions, a cancerous cell, and so on. If we think about these behaviors as executable cell programs, we can try and trace back the ‘algorithms’ and the ‘computations’ behind these cellular programs, and by doing so we can figure out the actual recipe or set of instructions that a cell needs to follow in order to behave in a particular way. We can also gain insights into what goes wrong in the ‘program’, leading a cell to become cancerous and start dividing in an uncontrolled manner. This vision led me to coin the term Executable Biology more than a decade ago.

Q: Why is applying executable computer algorithms to biological phenomena so significant? What excites you about it?

A: When we apply executable algorithms to model the behavior of biological systems, we get novel insights into those cellular programs, understanding better how they operate, and we can also learn what goes wrong in a particular program to lead the cells to behave abnormally. The huge advantage of this executable biology approach is that it also allows us to simulate and analyze these behaviors very quickly – in a matter of seconds we get an answer as to whether a certain combination of drugs would lead to a desired effect or not. We mimic the effect of known drugs and we can test the effect of unknown combinations of drugs, as well as predict novel drug targets that are then tested experimentally in the lab. This gives us huge control when we think about complicated mechanisms of disease such as cancer. It also saves time and money during the crucial experimental and research stages of drug development.

In the research reported in Nature Biotechnology today, we’re working on automating the build of programs which represent the molecular networks of cells – we’re doing this from huge amounts of gene expression data gathered from thousands of cells, and on a single-cell resolution. This is really big data, and now we can actually make sense of it by using our developed techniques.

In addition to this, we’re also working on identifying novel drug therapies for leukemia, using a different tool of ours called BioModelAnalyzer, as recently reported in another Nature publication, Scientific Reports. In both cases, you can clearly see the impact this research already has on advancing our understanding of drug treatment in leukemia, and the potential it has to do the same for other common cancers. This is huge!

A: Microsoft Research is a wonderful environment to work in and do exactly this kind of work, which requires innovative thinking. The MSR labs across the globe host an amazing source of talented people from diverse backgrounds – algorithms, programming languages, human-computer interaction, program analysis, and much more. This pool of multi-disciplinary researchers allows us to develop in-house, novel technologies which, as we can already see, revolutionize the way we do science, the way we study living systems and in the near future will also help us bring to the market better therapies for complicated diseases which we’ve been struggling with for years, such as cancer.