“I had the opportunity to meet Katie in Seattle during the Graduate Cohort Program of the Computing Research Association’s Committee on the Status of Women in Computing Research [CRA-W],” recounts Johnson-Stempson, principal research director of Education and Scholarly Communication for Microsoft Research Connections. “She was presenting a poster on her research on educational technology and serious games.

“She was discussing her research on how emerging game technologies, specifically ubiquitous and augmented-reality gaming, can be used to facilitate new interaction that promotes learning and skill adoption for players more effectively. I realized that she was the young lady I would like to do research with and have her help us with our education research and gender research.” 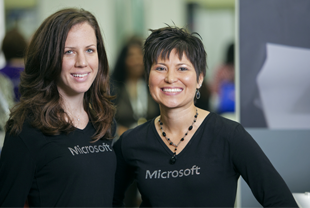 Doran, a Ph.D. student at North Carolina State University, was invited to intern alongside Johnson-Stempson, and, from all appearances, it has been the start of a longtime collaboration.

“Working with Rane has been fantastic,” Doran says. “She is truly passionate about the work she does to encourage more women to join computer science. Rane has been the perfect mentor: She’s supportive, welcoming of new perspectives, and eager to see me succeed. She’s so much more than my boss during my internship. She’ll be a lifelong friend and mentor.”

Passion, support for women in computer science, mentorship—these are precisely the attributes shared by the more than 3,000 attendees of the 12th annual Grace Hopper Celebration of Women in Computing, being held Oct. 3-6 at the Baltimore Convention Center. The event, named after computing pioneer Grace Hopper, is the largest technical conference that showcases the work of technical women around the world.

Naturally, Microsoft’s support for such a conference is robust. Johnson-Stempson, who is leading the company’s efforts to support women in technology and to inspire young women to pursue careers in science, technology, engineering, and math, worked with members of the sponsoring organization, the Anita Borg Institute for Women and Technology, to bring 165 women leaders from Microsoft to the event. Fourteen of the Grace Hopper Celebration speakers are representing Microsoft, and the company is participating in a number of high-profile events aligning with the conference.

It’s all a measure of Microsoft’s commitment to recruiting and retaining the best and brightest women in technology and helping to mentor the future generation of women leaders in computer science. For example, Microsoft Research has announced its support of the NetHope Academy’s Women’s TechConnect program and of a celebration for winners of the National Center for Women & Information Technology (NCWIT) Award for Aspirations in Computing.

The latter event, held Oct. 4 and sponsored by Microsoft Research, celebrated the achievements of 50 past and current winners of the Aspirations in Computing award from around the country. Peter Lee, corporate vice president of Microsoft Research Redmond, was on hand to speak and celebrate the winners, along with Johnson-Stempson, Doran, and Lindsay Lindstrom, a technical evangelist for Microsoft’s Developer and Platform Evangelism (DPE) group.

Microsoft Research sponsored an NCWIT Academic Alliance reception and spoke on the importance of the work done by the alliance to recruit and retain more women in computer science across the nation.

“As the national affiliate sponsor, Microsoft support has made it possible for us to bring the NCWIT Award for Aspiration in Computing to aspiring technical young women across the entire United States,” Farmer says. “In 2012-’13, we expect to recognize a thousand girls through 55 events nationwide.

“Having Microsoft as a partner adds clout to the program and helps garner community support. Other stakeholders see this and think, ‘If one of the biggest software companies in the world cares about this, maybe we should, too.’”

A.J. Bernheim Brush (right) of Microsoft Research Redmond chats with an acquaintance during the Grace Hopper Celebration of Women in Computing.

Microsoft speakers during the event include:

“By increasing the diversity of our workforce, we enhance our ability to tap into segments and markets in a competitive way,” says Rashid, also a member of the Anita Borg Institute board of trustees.

Lee and Johnson-Stempson also participated in the awards ceremony. The latter underscores the importance of such recognition.

“As a company,” she says, “we want to build the greatest in technology innovation. This requires that our researchers and engineers are on the most diverse teams, with individuals who think differently, approach problems differently, and come to solutions in different ways.”

Also on Oct. 4, Telle Whitney, president and CEO of the Anita Borg Institute, announced the official launch of the Women’s TechConnect program, which supports women in the field with on-the-job skills development, mentoring, and collaborative problem solving to help propel women from entry-level positions to leadership roles. The program gives women in underdeveloped countries and disaster-prone areas the technical skills to assist in case of emergency.

“It’s no secret there’s a dearth of women in IT,” Johnson-Stempson says. “The situation is even worse in emerging economies, especially international development. It is this type of support in education and mentorship that will help grow more women in the developing worlds into computer science and technical fields.” 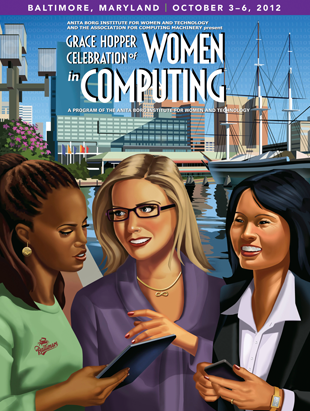 Cover of the program for the 2012 Grace Hopper Celebration of Women in Computing.

Her intern, Doran, has spent much of her internship at Microsoft Research evaluating ChronoZoom, a novel visualization of “big history,” as an educational tool. But she, too, has found time to advocate for getting more women involved with computer science.

“I’ve had the opportunity to involve myself in a good deal of gender and diversity outreach,” Doran says, “including coordinating visits to the Microsoft campus for two groups of students and promoting Microsoft Research’s incredible outreach tools during STARS Celebration 2012.”

This interest, too, caught Johnson-Stempson’s attention during the CRA-W event earlier this year.

“She spoke to my heart when she discussed her work in northern Haiti as part of the One Laptop per Child deployment,” Doran’s mentor says. “Not only did she teach students and teachers basic computer knowledge, but also game development. In addition, she was in charge of setting up a school server at one of the Haitian schools that allowed the One Laptop per Child laptops to network together, and she hosted an online-learning-management system, where teachers could host learning materials for the students to access.”

Such passion is something that ties mentor and mentee together—and works to provide ongoing support to entice girls and young women to consider a career in computer science.

“Computer science can empower people to find their own solutions to problems,” Doran says. “It encourages innovation and enables people to create, rather than simply consume, technology. The potential for people to achieve great things through computer science is incredibly high, and I think the more people who have the skills to reach that potential, the better.

“Unfortunately, there are clearly under-represented groups—women, minorities, and people from lower socioeconomic backgrounds. These groups should have the same opportunities for greatness that our well-represented groups have had, and I want to make that happen.”