Gaurav Sharma appeared relaxed but focused in his purple hoodie on January 16, 2014. Less than 20 seconds later, Sharma, a 15-year-old from Lakeside High School in Seattle, found himself the owner of a Guinness World Record® for fastest text message using a touch-screen mobile phone. 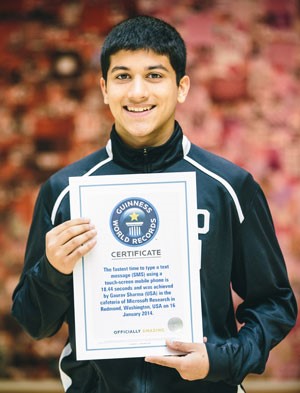 Word Flow with shape writing, the same Microsoft Research technology that powered Sharma’s record-setting effort, soon will be available for mobile-phone users as a key feature in the just-announced Windows Phone 8.1.

Sharma’s time of 18.44 seconds to create a challenging, 25-word text message is quite a marvel. In three-quarters of a second less than it took sprinter Usain Bolt to set the world record in the 200 meters in the 2009 World Championships, Sharma whipped through:

The razor-toothed piranhas of the genera Serrasalmus and Pygocentrus are the most ferocious freshwater fish in the world. In reality they seldom attack a human.

That passage—precisely 160 characters long—is a handful to type, but not if you’re using Word Flow—an earlier version of which had been used to set the previous text-speed record.

The path toward Sharma’s record-setting achievement began with a challenge. Peter Lee, Microsoft corporate vice president and the head of Microsoft Research, had been urging his researchers to demonstrate the kinds of unlikely results that can come from really smart people taking really big risks. The idea was to explore something technically amazing, without thought of publication or transferring the technology into a product, but it had to be measurable.

Given the prevalence of texting in our lives, Johnson Apacible, research manager, and Tim Paek, senior researcher, proposed creating a touchscreen keyboard that would enable users to text “blindly”—without having to look at the screen. Normally, texting using a touchscreen requires the user’s full visual attention, but at times, that can be inconvenient, impolite, and even illegal. To make the proposal measurable, Apacible suggested trying to break the Guinness world record for fastest blindfolded texting, as well as the more general record: fastest texting on a touchscreen device.

How, though, do you set a world record for fastest blindfolded texting?

“Our whole approach,” Paek says, “is all about promoting muscle memory and making shape writing robust to mistakes.”

What is shape writing?

“Instead of tapping every single letter,” Paek explains, “you’re drawing a line that connects all the letters of the word you’re trying to write. When you continuously draw that line, you are defining a shape. Eventually, you stop thinking about the letters altogether and develop muscle memory for that shape.”

It sounds simple enough, but once you examine the details, things get a bit more complicated.

For one thing, instead of connecting letters, they developed a new type of QWERTY keyboard with Microsoft Research colleague Bongshin Lee, one in which the letter keys are combined into groups that provide larger target areas than a traditional keyboard with 26 distinct letter keys.

“Bongshin,” Paek says, “was instrumental in coming up with the grouping design that allowed us to use muscle memory for connecting groups.”

Still, shapes connecting groups must be recognized by a software tool, known as a decoder, to identify the words they signify. For that, the team turned to another colleague, Asela Gunawardana, affectionately nicknamed Zilla.

Grouped-key layout of a research prototype for blind texting.

“Accuracy is a problem,” Paek says, “because every group has several letters. We needed to come up with a way of decoding ambiguity accurately, and that’s a hard technical challenge. Fortunately, we had Zilla. He came up with a really clever approach for breaking this problem down.”

With a combination of an effective user interface and machine-learning algorithms in hand, the researchers set their sights on the texting world record.

“We needed a goal to go after,” Apacible says, “something that’s easy to measure. Can you do it or not? It’s hard to measure anything in terms of input, so we asked: ‘What’s measurable here? Let’s go after the world record.”

That they achieved—twice—a mere seven months into the project.

“We came up with an extremely ambitious deadline,” Apacible explains, “and just went to do it.” 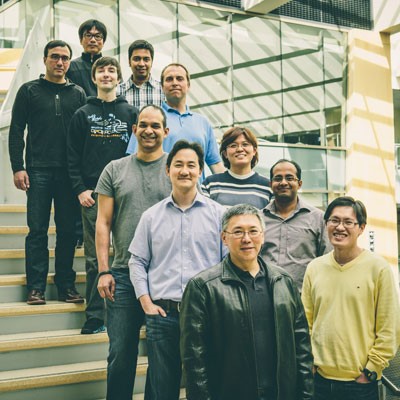 “The existing record didn’t say ‘texting while blindfolded on a mini-QWERTY keyboard,’” Paek says. “It just said ‘on a mobile device.’ Our approach was to use a touchscreen to break it. “Someone might think: ‘Why would you use a touchscreen? Doesn’t that make it harder?’ For us, it makes it easier.”

On April 24, 2013, the task was to produce, blindfolded and as quickly as possible, the same text on which Sharma later was tested. The previous blindfolded record had been 45.09 seconds, but Mark Encarnación, a senior developer on the team, swiped the defined text in a mere 25.90 seconds—a time that also improved on the fastest previous sighted text.

Then, the same day, he proceeded to smash the mark for fastest sighted texting, completing the text in 20.53 seconds, more than five seconds faster than the previous record of 25.94.

The 20.53 time was the mark broken by Sharma, and, as a record holder for nine months, Encarnación knows the feeling well.

“It was surreal,” he recalls of his record-setting performance. “The team had been working hard on the project for months, all leading up to that morning, and it didn’t sink in right away that we had really done it, that we set two new world records!”

And not only that—the team also had established a new Guinness record category: blindfolded texting on a touchscreen device.

“They said: ‘That’s really interesting,’” Paek says. “‘You did something we didn’t expect at all, so we’ll just define a new category for you.’” 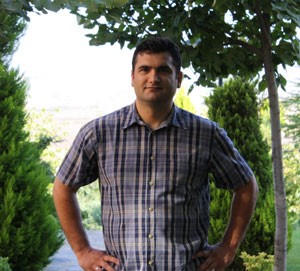 That confirmation delivered immense satisfaction to the record-breaking Microsoft Research team. Atilla Gunal, Vishwas Kulkarni, and Encarnación each took the lead in particular engineering aspects of the project, and they received able assistance from Yutaka Suzue, Woon Kiat Wong, and Paul Hsu.

Records are great, but having your work incorporated into a product that will delight millions is even more exhilarating. The researchers soon partnered with the phone unit’s Eric Badger, Lynn Dai, Dmitry Rudchenko, and Partha Sundararajan to apply some of their techniques.

“They have been superb collaborators,” Paek says. “We’ve been working with them for quite a while. They are very forward-thinking, and they wanted to make sure that whatever innovations we came up with in research could be integrated into their product plans. They have always been that way. I think that whole team should be commended for their openness to research, for their collaboration, and for bringing this technology to Windows Phone.”

The benefits of that collaboration soon will be realized by teens, tweeters, and thick-thumbed texters the world over, some of whom, no doubt, will set their sights on Gaurav Sharma’s record. Game on!