Here is what I have told new hires of Microsoft Research (MSR) since I became a manager some 14 years ago:

MSR gives you the freedom to explore and expand the bounds of scientific knowledge, as in academia, but with the added challenge to align your scientific pursuits with company problems and to drive for impact on Microsoft, especially as you grow in seniority at the company.

This statement is still as true today as it was when I joined MSR 17 years ago and reflects MSR’s associated goals of advancing scientific frontiers and positively impacting the company. 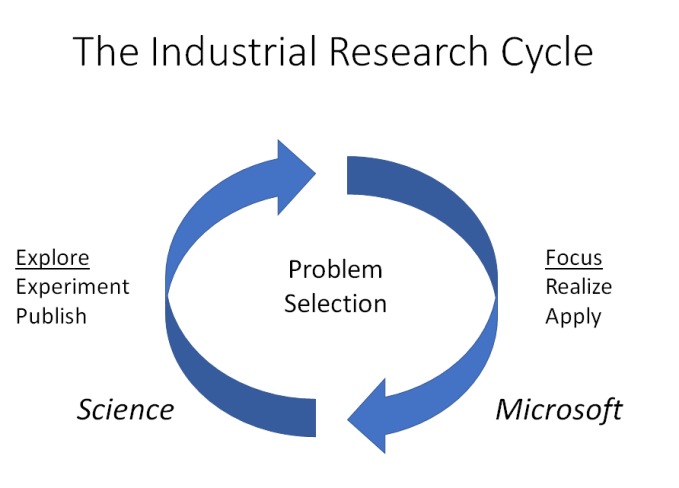 I use the model of “The Industrial Research Cycle” to explain how MSR works. Researchers have the freedom to select problems and to explore in their discipline (the left side of the cycle) to advance science. They also have the responsibility and opportunity, once sufficient exploration has taken place, to focus their attention on an area that they believe can produce impact for the company (the right side). Ideally, the problems/solutions that one explores on the left side of the cycle eventually drive impact on the right side. And the experience one gains from the right side not only validates the science at scale, it also pushes exploration in new directions in the next phase. A researcher will go around the cycle many times during their career. 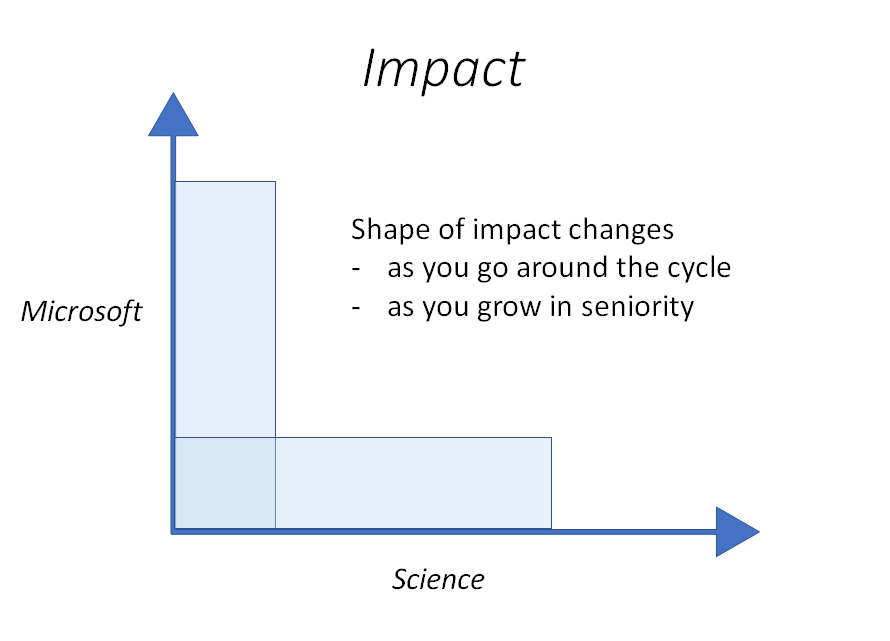 It is difficult to simultaneously explore and focus, and to do both well! Instead, one needs to engage in phases of exploration and focus over years.

I use the “Impact” diagram to explain the different forms/shapes of impact. The x-axis measures the level of scientific impact. The y-axis measures the level of Microsoft impact (see box).  One’s impact is measured by the area under the curve. The shape of one’s impact curve changes over time, both as one goes around the industrial research cycle and as one grows in seniority at the company. 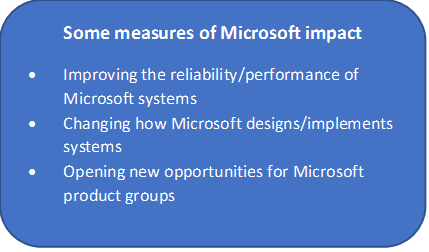 As one grows in seniority in the company, the expectations for focusing on Microsoft impact increase. On the other hand, junior researchers enjoy more freedom to explore. Fresh Ph.D. hires at MSR still have much work to do to establish themselves as recognized experts in their fields. While some may indeed engage with product teams early in their career, we do not expect junior researchers to jump right in to address problems of the company.

While we encourage our researchers to actively publish, MSR does not emphasize quantity of publications. Quality is our top priority. 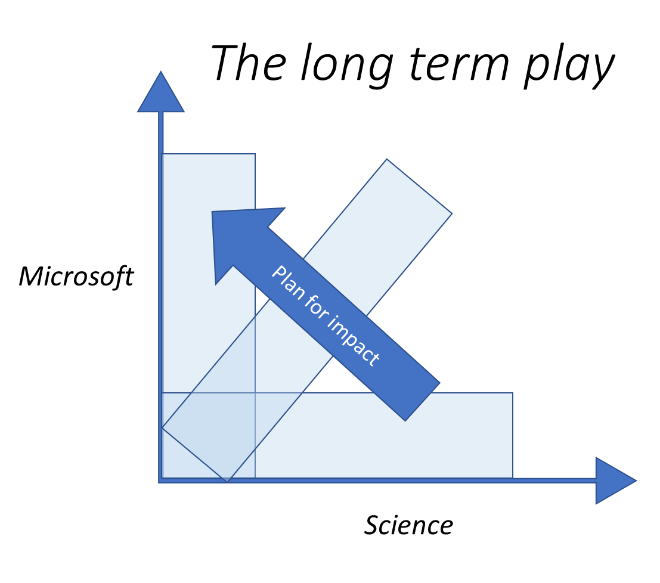 MSR invests in scientific efforts that may not have immediate impact on Microsoft but that will build a new muscle/capability for the company in the long run. I use the “The long term play” diagram to show that a coordinated and long-term effort often is needed to turn scientific results into company impact.

Below are three examples showing the path to impact, which requires working closely with partners over the long term, building relationships and trust, and changing company culture through new ways of approaching a problem.

In late 1999, Sriram Rajamani and I started the SLAM project at MSR to investigate new approaches for automatically finding code defects in device drivers. When the Windows Driver Quality was formed in 2002, Byron Cook, Jakob Lichtenberg and Vladimir Levin came into the team to deliver a tool called Static Driver Verifier (SDV), based on the SLAM engine. The first version of SDV was delivered with Windows in 2004. During the last decade, SDV’s underlying analysis engine has been improved/replaced by MSR three times (see papers on SLAM2, YOGI and Corral) by different sets of researchers working closely with the Driver Quality team, including Ella Bounimova, Aditya Nori, Rahul Kumar, Shaz Qadeer, Akash Lal and Shuvendu Lahiri.

More recently, the Touch Develop project (www.touchdevelop.com) started in MSR in 2011 to make it possible to program scripts for smartphones on smartphones. An unexpected use of Touch Develop was in K-12 computer science education— teachers found that children were engaged by scripting their smartphones to react to environmental stimuli.

This turned into a project with the BBC to create a small physical computing device with an easy-to-use coding platform (built on Touch Develop). One million of these devices, called micro:bits, were delivered in 2016, enough for every fifth grade student in the UK to receive one. Because of the BBC micro:bit, Microsoft is now investing in a new programming platform for CS education.

Today, we find a handful of companies developing planetary-scale distributed systems. Amazon, Facebook, Google and Microsoft all have built such systems, and are engaged in optimizing them for performance, reliability, availability, security and privacy. Microsoft Azure is one such system, which provides compute, storage and networking services, and interacts with an ever-growing number of mobile devices and IoT endpoints.

Optimizing every level of the stack, from the hardware assets, to the low-level operating system code, to the user-facing services, is key to its success, and affords opportunities for researchers across a wide range of disciplines, including those in systems, formal methods, software engineering and programming languages.

Here are four new, larger-scale projects related to the cloud that the RiSE group is deeply involved in:

Want to be part of the industrial research cycle?

No matter if you’re exploring or focusing, the ride at Microsoft Research is an exciting one.  If you are interested in joining us on this journey, please visit our careers page.