Following fast on the heels of its original BLINK app for Windows Phone 8—which captures a burst of images when you take a photo so you can select the best shot—Microsoft Research Redmond is releasing an updated version of BLINK, along with a new app called BLINK Cliplets that lets you creatively manipulate video clips. In addition, it’s easy to share what you create using these apps with your family and friends. 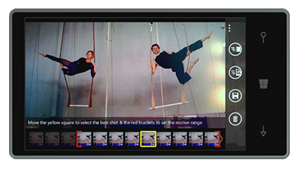 With BLINK, a Windows Phone 8 user can select from a collection of shots at the bottom of the display to get precisely the shot she wants.

The updated BLINK app takes that burst of images—16 shots that start before you press the shutter and extend to about a second afterward—and creates a photo flipbook, known as a “BLINK.” By moving through that little bracket of time, your series of photos becomes a dynamic animation. It’s the perfect time span for capturing just a bit of motion—your baby’s breaking smile, perhaps, or a back flip off a diving board. The new app can be used with any camera on any device.

Windows 8 users also can download and try the new BLINK Cliplets app, which lets you combine and loop static and dynamic elements from short video clips. The resulting Cliplets can range from artistic to ingenious to outlandish. Fans of Microsoft Research apps will recall Cliplets for Windows 7. Now, the new version, with more sophisticated features and new sharing capabilities, is designed for use on the touchscreen of any Windows 8 tablet, laptop, or desktop device.

Users can share their BLINKs and Cliplets on their Facebook wall, via Twitter, through email, and on Socl, a social network from FUSE Labs at Microsoft Research that enables users to curate, collect, and share visual media.

Both BLINK apps are free, from the Windows Phone Store and the Windows Store, respectively.

A New Way to Capture the Moment

The BLINK project team, led by Michael Cohen and Matt Uyttendaele of the Interactive Visual Media Group, quickly realized that users of the original BLINK enjoyed flipping through the frames of photos and reliving the moment as much as they did choosing which frame or frames to keep. And those users were clamoring for more creative ways to use and share their images.

Krishnan Ramnath, the main developer of BLINK, came up with the name, as well.

“I wanted something that was easy to say and was also related to the app,” Ramnath says. “I thought, ‘BLINK, and you won’t miss a thing!’ I said it aloud a few times and was convinced that the app should be called BLINK.”

A fortuitous choice, it appears.

“People seem to love BLINK, and I hope they’ll enjoy this update, which gives them a lot more creativity,” says Cohen, who notes that, in its first couple of months, BLINK quickly became one of the most popular photo apps for Windows Phone 8, with more than 317,000 downloads, by users from nearly every country in the world.

“My goal in this work has always been to allow people to truly ‘capture the moment,’” Cohen says. “A moment is not just an instant in time, but rather a specific memory that is constructed from a few seconds of experience.”

Cohen himself came to appreciate the power of BLINK during a family trip to Italy last year.

“Just as when you pick up your camera on vacation and start to see framed ‘shots’ to take, knowing you are capturing BLINKs makes you very aware of the tiny bits of motion around you, and you are drawn to them,” he says. “As a photographer, once you know you are capturing BLINKs, your mind starts to ‘see’ the world in a different way.”

Getting Creative with BLINK Cliplets

The BLINK Cliplets app offers an even more sophisticated level of visual creativity.

To illustrate, Cohen has created a series of tutorials that show how easy it is to create Cliplets from bits of video—10 seconds or less—that you upload to the app. One tutorial shows a girl leaping out of a toy store while a mechanical Pinocchio doll rides a unicycle beside her. You can make each moving element in the video have its own layer—so, for example, you can freeze the girl mid-jump while the doll continues to pedal along. Or you can have her jump out and back repeatedly while the doll keeps pedaling forward.

“It’s not a video, it’s not a photo—it’s this combination,” Cohen says. “You can get more creative and create a fun postcard to send off to somebody.”

The possibilities for humor and play are endless. Memes that have emerged already among the research team include making a person’s eyes roll in opposite directions, having birthday candles get blown out and relit repeatedly, and playing with the temporal sequence of events in a video clip to create unlikely juxtapositions.

“The Cliplets app is really great for adding more life and expression,” says Cohen’s colleague Neel Joshi, one of the creators of Cliplets.

“I’ve always really liked the idea of the Harry Potter photo that is always alive and moving, and Cliplets makes it really easy to make these kinds of imagery. Another big appeal of Cliplets for me is that it’s a great way to make videos that are easy to consume.”

“Often, the best part of a really long video of a party or event is just a brief moment,” Joshi says, “and Cliplets gives you a way to highlight that and share it with your friends and family. Cliplets allows you to focus a person’s attention on what you think is important or what you want to convey as the person who experienced the moment.”

“Personally, I find I make a ton of Cliplets of my dog,” he adds. “Cliplets capture her personality so much better than still photos.”

Although BLINK apps have been built for simplicity and ease of use, the underlying technology is highly sophisticated. Before you press the shutter to take a burst of photos, for example, BLINK is already recording images into its short-term memory—that’s how it saves “a little bit of the past and a little bit of the future,” as Cohen puts it. The Cliplets app also uses advanced image-stabilization technology that removes the effects of camera shake, stabilizing your handheld video clips so they look like they were captured by a camera or a smartphone set on a tripod.

“With native code support in Windows Phone 8,” Ramnath says, “we were able to offload the image stabilization and rendering to the GPU, which allowed for buttery-smooth scrolling through the set of captured images.”

It’s no surprise that the magic of BLINK has come from the same computer-vision and computer-graphics experts at Microsoft Research whose groundbreaking tools and innovations include image deblurring, panoramic stitching, image-search technology, and interactive navigation through photorealistic environments.

The idea that evolved into BLINK began with a talk that Cohen gave at the Massachusetts Institute of Technology in 2005 in which he described how future cameras would capture bursts of images that could be transformed and viewed in many ways.

Cliplets started as a research project and led to an award-winning paper in 2012 by Joshi, Cohen, Uyttendaele, and several other Microsoft Research colleagues.

“It was really a fun, new experience for me to write ‘research’ code that then became a publically available app,” Joshi says. “The development expanded in an organic way as more people got involved in the development and design process, and Cliplets took on a life of its own.

“One of my primary motivations for the initial research and development of the app was to empower casual users to create something fun, unique, and memorable that went beyond traditional, ‘boring’ photos,” he says. “The simple yet expressive creation tools and the ability to share Cliplets are really compelling to me.”

A New Kind of Sharing Community

With the new sharing capabilities on Socl, the BLINK experience has expanded into a collective creative endeavor.

“The BLINK community of fans and photographers is a blast of creative energy,” says Lili Cheng, general manager of FUSE Labs. “By inspiring and riffing on one another’s ideas and interests, the moments shared in BLINK and BLINK Cliplets get more creative and magical as more people experiment with the tools.”

For Cohen, the creating and the sharing go hand in hand.

“We all remember that moment when our daughter launched the ball into the goal,” he says. “We can see her foot hit the ball and the ball launching off in that perfect arc. We see in our mind when she giggles as the dog laps her face. Sharing these moments requires being able to capture, edit, share, and view small fragments of time. These are what BLINK and BLINK Cliplets let you do.”

Download the apps, and start creating and sharing today on your Windows Phone and Windows 8 devices.