Microsoft has released two new features with today’s update to Microsoft Pix for iOS, an app powered by a suite of intelligent algorithms developed by Microsoft researchers to take the guesswork out of getting beautiful photos and videos.

The first of these features, Photosynth, helps create photos that take in more of the perspective or scene you are standing in front of, whether it is wide, tall, or both. It does this by allowing you to freely pan and capture from side to side, up and down, back and forth, and even go back to the start to include any parts of the scene you may have missed. 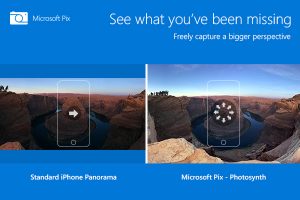 “The idea came after some frustrations I had when trying to take a picture of Snoqualmie Falls. I didn’t want to have to choose which part of the scene to capture, and I wanted it all with detail. Photosynth means you no longer have to choose. I can now capture the whole scene in a way that feels natural. As with all Pix features, we have also worked to give the best image quality by introducing more intelligent ways to compute exposure and stitching,” said Josh Weisberg, principal program manager within Microsoft’s AI & Research organization in Redmond, Washington.

Photosynth, originally a popular platform for turning digital pictures into 3D panoramas, was launched by Microsoft in 2008 and decommissioned in 2017. Photosynth in Pix shares similarities with the original, leveraging some of the underlying technology, with more features inspired by the original to come. Photosynth in Pix allows for faster and smoother capture, while also making use of Pix’s auto-enhancement capabilities which improve white balance, tone correction and sharpness.

The second feature, Pix Comix, was developed during Microsoft’s OneWeek hackathon and makes use of the core Pix feature Moment Capture in an innovative new way: identifying the most interesting frames in a video to generate a comic strip. Pix uses its deep learning model to score and select three high-quality frames, searching specifically for non-blurry photos, faces with eyes open and interesting scenes. 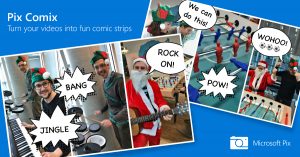 Pix Comix performs this AI processing on device, selecting the best frames and formatting them into a comic strip. From there, you can add and edit speech bubbles that can be moved, rotated and resized to tell your own story.

Listening and responding to customer feedback on Pix remains a top priority as the app continues to improve and its AI capabilities are further developed. Today’s release marks another step forward in Pix’s commitment to turning that user feedback into new ways to make your pictures even better.