A Simple Way to ‘Poll’ Students

In a classroom near Bangalore, India, young students packing a classroom eagerly wave sheets of white paper covered with black symbols. They aren’t misbehaving—they are participating in a test of new educational technology pioneered by a team at Microsoft Research India. Those paper sheets could offer an inexpensive method of improving classroom teaching and student participation throughout the developing world.

The technology is a new approach to classroom “polling”—asking for student feedback on how well they understand a question or answer a problem. Studies have shown that real-time evaluation of student performance helps keep students engaged and helps teachers adjust the content and pacing of their lessons to accommodate the entire class. 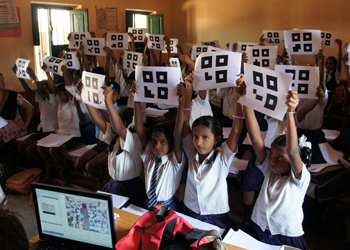 Schoolchildren in Bangalore, India, respond to a teacher’s multiple-choice question.

In Bangalore, a team from the Technology for Emerging Markets (TEM) group at Microsoft Research India has developed a way to use webcams and symbol-coded sheets of paper to recognize, collect, and analyze student responses to multiple-choice questions—and it does so quickly and inexpensively.

Just about everyone who has been in a classroom has participated in classroom polling. A show of hands is a type of poll, as is calling on students to answer a question or offer feedback. Tests are a poll, as well.

But these approaches have drawbacks. A show of hands could lead students who are shy or unsure of themselves to go with whatever everyone else thinks is right. Calling on individual students paints only a partial picture of classroom understanding. And while tests are complete and accurate, they take too much time to reflect immediate understanding.

Electronic polling systems use small devices called “clickers,” which are distributed to students. The clickers are wirelessly connected to an in-class network, and students press a clicker button to answer multiple-choice questions. Clickers work well, and one company alone says about 2 million students use its device. But clickers can cost $30 apiece, in addition to $200 for the receiver—an amount out of the reach of schools in many parts of the world.

Andrew Cross, a researcher at Microsoft Research India, devised the idea for a polling system using paper and webcams during conversations with a local nonprofit called CLT India, which operates a distance-learning program in which talented teachers conduct K-12 classes of rural students via video conferencing.

“One of the key challenges in such tele-education programs is ensuring that students are engaged with the teacher and keeping up with the lesson,” Cross says. “While the teacher has a real-time video feed of the classroom, it’s hard for them to assess how well their students understand new concepts. Our goal was to help teachers quickly poll the class to test the students’ understanding of various concepts.”

Along with CLT teachers, the Microsoft researchers started to think of ways to implement polling of remote classes easily. One idea soon came up: Because the CLT teachers already were using webcams to monitor their classes, perhaps those cameras could be leveraged with a new polling method. Such a polling method also could be used almost anywhere, because webcams are so inexpensive—usually around $60.

The other inspiration came from Quick Response (QR) codes often seen on advertisements and other communications. People can scan these codes with their smartphone cameras to learn more information. In this case, the researchers designed 7-inch-by-7-inch printed cards with a relatively simple QR-type code. It would contain three black blocks to help the webcam locate the card and determine its orientation, and a code that contained a student’s ID. Students vote by holding up their card in one of the four possible orientations, corresponding to multiple choice answers A, B, C, or D.

The large coding on each card helps with recognition through the webcam and an algorithm that determines what the card says. On the back of each student’s card, the respective answers—A, B, C, and D—are printed on each edge. Students vote by orienting the card so their chosen response is at the top, and then hold the card up for the camera to recognize.

A recognition algorithm in a PC attached to the webcam follows a series of steps to understand the card’s meaning. It digitizes the image of the all the students and then detects images that correspond to the three black blocks on the cards, verifying it is “seeing” an answer card. It then calculates the position and rotation in space of the card, and uses that information to ascertain the location of markings denoting information about the student and answer. Finally, it converts the digitized student record to a decimal number that is used to tell the teacher the rates for successful answers.

The first field test for the new polling system was with a nonprofit near Bangalore that runs a “computer clubhouse” that hosts after-school enrichment activities. The goal of the experiment in the after-school program was simple: to understand if students readily grasp the concept of using encoded cards to submit an answer and whether this new, interactive technology engaged them.

To engage with students, the team created a quiz-show game themed after Kaun Banega Crorepati, the Indian equivalent of Who Wants to Be a Millionaire. An LCD projector showed multiple-choice questions to a group. The projector indicated which students had answered a given question in real time, enabling them to lower their cards once their answers were recognized.

After each question, the system displayed the distribution of student responses, the correct response, and a leaderboard that listed the names of students with the highest scores.

“That was a lot of fun, and the reaction was very positive,” Cross says. “Students were able to quickly learn and utilize the system and were enthusiastic to participate using the response cards. Teachers were also excited about the prospect of getting real-time feedback on student understanding. Due to the positive response in our initial trials, we are now working with our partner organization to extend the system for daily use as part of its distance-education program.”

The webcam-polling system had proved itself to be both fast and accurate. In recent tests, the Microsoft Research India team has achieved 99.8-percent accuracy using the cards in a classroom environment. Furthermore, the card systems cost about 5 percent as much as a clicker system.

The card-polling method also was fast, typically reporting results to teachers within 10 seconds of students flashing the cards.

Cross sees a bright future for the card-polling technique, which will be presented in Boston in October during the Association for Computing Machinery’s 25th Symposium on User Interface Software and Technology.

“We think this system has great potential for classrooms around the world, even in well-resourced environments,” he says. “Very few classrooms in the K-12 context can afford an electronic-response system, such as a clicker, for every student. This has the potential to make the classroom engaging and fun, while enabling teachers to keep better track of the progress of students.”

He credits Microsoft Research for giving his team—which included Bill Thies, a researcher, and Ed Cutrell, manager of the TEM group—the freedom to pursue creative approaches to big problems such as expanding educational opportunities.

“It is a wonderful privilege to be able to freely invent and apply new technologies that directly address key problems in education and other socially relevant areas,” Cross says. “Microsoft Research enables us to focus on the most important problems and to address them in very creative ways that are not usually possible from a normal company.”

Episode 103 | January 22, 2020 - Dr. Sriram Rajamani is a Distinguished Scientist and the Managing Director of the Microsoft Research lab in Bangalore. He’s dedicated his career to advancing globally applicable science in the testbed that is India. He is, by any measure, a world-class researcher and leader. He’s also, as you’ll find out shortly, a world-class storyteller! On the podcast, Dr. Rajamani talks about the unique challenges and opportunities of leading MSR’s research efforts in India and what it takes to build a robust research ecosystem in a country of huge disparities. He also dispels some preconceptions about poor and marginalized populations and explains why ‘frugal innovation’ may be one key to solving societal scale problems. 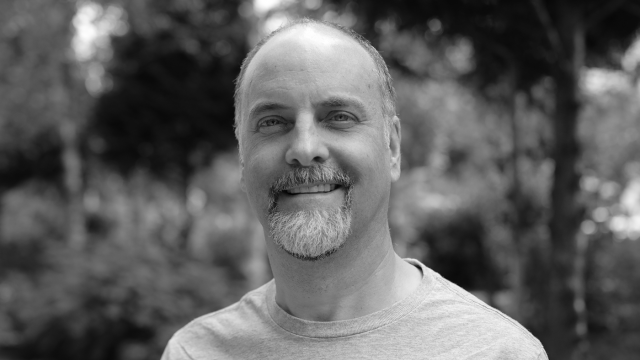 Inclusive design for all, or ICT4D and 4U! with Dr. Ed Cutrell

Episode 88, September 4, 2019- Dr. Ed Cutrell is a Principal Researcher in the Ability group at Microsoft Research and he’s convinced that great technology should be available to everyone. Working in the fields of Accessibility and Information and Communication Technologies for Development (aka ICT4D), his research has explored computing solutions for people across the resource and ability spectrum, both here and around the world. Today, Dr. Cutrell gives us an overview of his work in the disability and inclusive design space, explains the vital importance of interdisciplinarity – a fancy way of saying many ways of thinking and many ways of knowing – and tells us how a dumb phone beat a smart tablet in rural India… and what that meant to researchers.

Technology for Emerging Markets (TEM) is a multidisciplinary group engaged in a range of technical and social-science research. By combining a variety of backgrounds and training, we are able to engage deeply with some of the complex problems associated with…