Two conferences, same region, consecutive weeks—sounds like a perfect opportunity for a social.

That’s certainly what sprang to mind for Meredith Ringel Morris, researcher in the Natural Interaction Research Group at Microsoft Research Redmond when she realized that the Association for Computing Machinery’s (ACM’s) fifth International Conference on Web Search and Data Mining (WSDM 2012) would be occurring in Seattle from Feb. 8 to 12, the week before the ACM’s Computer Supported Cooperative Work conference (CSCW 2012), to be held Feb. 11-15 in nearby Bellevue, Wash.

“Since the two conferences were happening in close proximity,” Morris says, “I thought it would be interesting to hold a bridge event over the weekend to bring the two communities together.”

The result was the Social Search Social, sponsored by Microsoft Research Connections and held on Microsoft’s Redmond, Wash., campus on the evening of Feb. 11. Morris, though, had more than a cocktail party in mind. It was an opportunity to foster networking and collaboration between the conferences’ research communities. 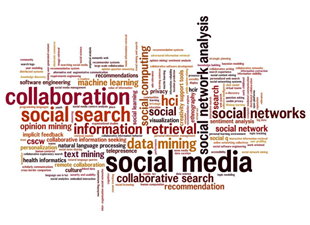 The number of researchers who belong to both communities is small. Morris’ goal was to provide a networking opportunity for both groups, because there is a great deal of affinity between them. She believes that if the two communities were to work together more often, they could achieve interesting research advances.

“The WSDM community is very focused on data mining, machine learning, and statistical analyses,” Morris says, “whereas researchers in the CSCW community are interested in user-interface innovations and how users interact with technology. Although they approach social search from two different perspectives, it’s an area relevant to both disciplines. Combining these different perspectives will be critical to developing next-generation social-search technology.”

Morris points to two papers as examples of synergy between the two disciplines. The first is Tweeting is Believing? Understanding Microblog Credibility Perceptions, co-authored by Morris and her Microsoft Research Redmond colleagues Scott Counts, Asta Roseway, and Aaron Hoff, along with Julia Schwarz of Carnegie Mellon University. The paper was nominated for CSCW 2012’s best-paper award.

The other is the WSDM 2012 paper How User Behavior is Related to Social Affinity, co-authored by Rina Panigrahy, Marc Najork, and Yinglian Xie of Microsoft Research Silicon Valley.

Traditionally, people place more trust in content that originates from people in their social network.

“If you follow someone because you know them personally or by reputation,” Morris says, “you tend to view their tweets as credible. But when you search on tweets, you need to assess the trustworthiness of people outside your network.” 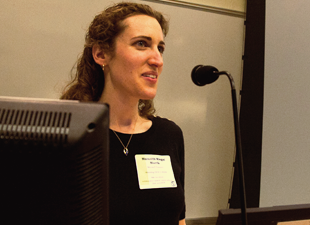 Morris and her team conducted experiments in which they systematically manipulated several features of tweets—such as Twitter handle, avatar appearance, and message topic—to assess how these factors influenced participants’ views of the credibility of tweet content.

“We had to structure an experiment that used both factual and false tweets,” Morris recalls. “The false tweets, however, had to be plausible, because anything that was obviously untrue wouldn’t really test perceptions of credibility. It was amazingly difficult coming up with false but plausible content.”

There’s more at stake than mere celebrity gossip. During political campaigns, people have been known to tweet false information about candidates—something that could influence voting decisions. In health care, misinformation can result in harmful decisions.

The researchers found that users are poor judges of truthfulness based on content alone; instead they are influenced by heuristics such as whether the tweeter has a topically relevant user name when making credibility assessments.

“As a result, we have some suggestions for how people might read tweets with a more cautious eye,” Morris says, “but we also have some useful ideas for how social search pages might redesign their user interfaces to present information that could help people make more informed judgments.”

When measuring proximity in a social network, the shortest-path distance between nodes is an obvious candidate, but shortest path by itself neglects to take into account the number of connections shared by two users. How User Behavior is Related to Social Affinity introduces a new measure of “affinity” in social networks that takes into account not only the distance between two users, but also the number of connections between them: the “robustness” of their connection. The team found that users who are close to each other—in terms of either distance or affinity—have a higher similarity in terms of demographics, queries, and tweets.

More than a hundred researchers from more than a dozen countries attended the Social Search Social. Researchers from universities such as the Massachusetts Institute of Technology, Stanford, Carnegie Mellon, Harvard, and the University of Washington mixed with industry peers from Microsoft, Yahoo!, Google, Amazon, Boeing, IBM, and LinkedIn. Most significantly for Morris, the guest list was split evenly between CSCW and WSDM attendees, evidence that each group was interested in the other’s perspectives.

Based on the nonstop discussions that transpired in every corner of the room, the Social’s success as an icebreaker exceeded even the expectations of co-organizers Morris, Gene Golovchinsky, Jeremy Pickens, Chirag Shah, Michael Twidale, and Madhu Reddy. The main activities were:

Armed with more specific knowledge of each other’s research interests, attendees spent the rest of the evening mingling informally. Attendees told organizers repeatedly how productive the Social had been for networking.

One attendee was so intrigued by the term “friendsourcing” from one of the Madness slides that he sought out the presenter immediately afterward for a lively, enjoyable discussion. Another added perspectives to his work of designing information-retrieval systems after listening to a presentation that described how people use informal, “mundane” tools in unique combinations to accomplish collaborative information retrieval. Speed-dating partners bonded upon discovering the complementary nature of their research.

The ultimate goal of the Social Search Social was to stimulate ongoing collaboration and cross-pollination. Organizers announced the creation of an email announcements list, intended to provide a forum where researchers can communicate with each other, advertise relevant workshops and symposiums, or solicit participation and collaboration.

The science behind semantic search: How AI from Bing is powering Azure Cognitive Search