The Brazilian rainforests are of immense importance to the world. They help regulate climate temperatures, create rainfall, and provide habitat for biodiversity. On the southeast coast of Brazil, the Atlantic Rainforest Sensor Networking Project is attempting to monitor how a small section of the forest is behaving on a minute-by-minute basis. Micrometeorology—the study of atmosphere just above the ground on small time and spatial scales—is critical to understanding how different ecosystems affect the Earth’s climate and vice versa.

The goal for environmental scientists on the project was to advance significantly their understanding of how the forest functions by obtaining more detailed data on what happens within the fine-scale atmosphere of the rainforest canopy. They needed measurements scaled down to events within an extremely localized area: the slope of a hill. The timescale also had to be compressed, with events being measured by the minute or hour rather than by the week. 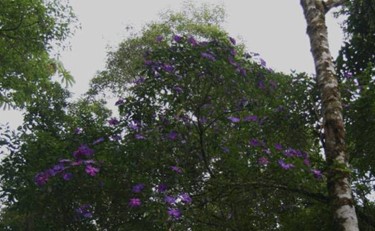 A rainforest canopy in bloom.

“If you’re going to understand a very large system such as a rainforest,” says Rob Fatland, program manager with Microsoft Research’s External Research division, “it’s important to have not only a large-scale picture of what’s going on across the forest, but also the details of how air and water vapor circulate inside the forest canopy. We need to learn how the rainforest connects to the planetary-boundary layer—the atmosphere above the forest canopy.

“There is heat and sunshine at the top of the rainforest canopy and a cooler area beneath. How do heat and moisture and the transference of energy happen? It all happens on a smaller scale, so you need sensors that are more localized to actually start understanding what’s happening in that environment.”

Carlos Henrique de Brito Cruz, scientific director at FAPESP, and Carlos Nobre, environmental scientist with INPE, approached Microsoft Research for assistance in developing a sensor network that could operate under rainforest conditions, with software that could perform analysis and help with visualization.

“Our mandate,” Fay says, “is to help researchers accelerate innovation and the research process as they work to solve the most urgent challenges in environmental science. This project exactly matched our mandate.”

The first challenge for Fay and his Brazilian colleagues was to find a research partner with experience in ecology-sensor networks. They turned to Andreas Terzis, associate professor at Johns Hopkins University, who had worked with Microsoft Research on a project called Life Under Your Feet. They believed they could adapt this earlier work on soil sensors to suit the needs of monitoring the air in a tropical rainforest.

From Brazil, a team led by Humberto da Rocha, a professor from the Universidade de São Paulo with expertise in micrometeorology, joined the project.

To reduce the complexities inevitably introduced by different languages and time zones when trying to keep the American and Brazilian teams in sync, Juliana Salles, senior program manager with External Research’s Latin American team, was asked to assist with the project. Later on, Fatland, experienced in sensor deployments from previous work on Alaskan glaciers, joined the team as Salles’ counterpart in Redmond. Their coordinated efforts proved invaluable when it came to logistics.

Fay smiles when he thinks back to the process of selecting a team.

“It reminded me of the old Mission: Impossible TV show,” he says, “where the team leader would throw out the portfolios of different people and pick the right ones to actually send on the mission.”

In April 2009, six months after the initial discussions, the project was officially under way—and facing three major hurdles.

The first technical challenge was to build sensor systems that could survive the elements—not to mention the animal life—in a rainforest to collect and transmit data reliably. There are sensors that measure humidity, temperature, and solar radiation.

“Each sensor is protected by a PVC cup,” Fatland explains, “which is filled with epoxy, and enough of the sensor pokes out that it can be sensitive to slight changes in whatever it’s measuring. Each set of sensors attach to a sensor-network node—which contains a wireless chip and some flash memory—which has been hardened in a waterproof casing.”

Sensor nodes collect data and transmit via a radio link, but they also store the data to flash memory, a necessary precaution: In case radio communications fail, each sensor node retains a full set of data.

The next challenge was to find a way to extend the battery life of the sensor nodes so the network could run unattended for as long as possible. The answer was to turn off the sensor nodes between measurements, rather than leave the device turned on and drawing power the whole time. The sensors were set to “wake up” and take a reading every 30 or 60 seconds, a technique for battery conservation called “duty cycling.” Fatland estimates that, with duty cycling, each battery can last for four months in the field.

What about using solar-powered cells? This raises the third challenge: cost. While solar energy would enable a rechargeable energy system, it also would add to the price of each sensor node. As Fatland says, it’s getting the right balance between data yield, deployment cost, and battery life.

“The researcher is going to have a budget,” he notes, “and the cost of the sensors is a huge part of the equipment cost. We wanted to minimize the per-sensor cost of building the system, which essentially translates into lowering the dollar cost per data value.”

The final design productized the sensors, taking them out of a research context and into a mass-production facility. This lowered the cost to a price that makes wider deployment feasible. 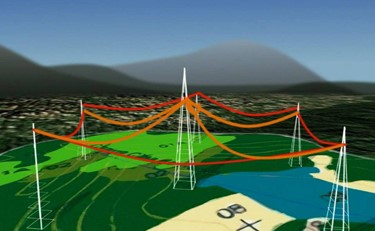 Deployment of towers with sensors (in red) placed on cables (in orange) above the rainforest canopy.

The rainforest-sensor project has been running for a year now. On the slope of a hill in Mata Atlântica, the Atlantic coastal rain forest in the Brazilian state of São Paulo, a 60-meter central tower and five smaller perimeter towers stand, joined by cables hanging two meters above the forest canopy. There are sensor nodes on the cables that radiate out from the central tower and also on a grid of cables stretched a meter above the forest floor—600 sensor nodes in all, delivering 18 million observations per month.

The Brazilian team periodically enters the area with laptops and wirelessly requests data downloads from the sensor nodes. When they return to civilization and Internet access, the scientists send the data to Johns Hopkins University, where the data files are processed into a format suitable for analysis and sent back.

A critical feature of this sensor-network technology is that it has a light footprint. It can be installed using fairly non-intrusive methods and, as a result, does not impact the environment under observation. Data collection is via a network of radio pathways, so there is no need to climb and physically connect to the sensor clusters. Miniaturization, further power reduction, increased energy storage—all of these could lead to devices that could operate unmaintained for several years in the field.

While solving technical challenges is always part of a successful project, Fay emphasizes that his definition of success for this project always has been to obtain good scientific output from the data. The ultimate goal is that the deployment of the sensors, the data capture, and the visualization of the data should provide scientists with quality information that advances their work.

There are research projects based on the application of sensor networks to environmental research, but in terms of sensor density, sampling frequency, three-dimensional distribution in the forest canopy, and deployment duration, the team believes this particular project is unique—and not only that, but suitable to a wide range of applications.

A traditional meteorological station measures temperature, precipitation, and wind at a single point. In contrast, sensor networks can be deployed across extended terrain, in the ground and in the air, opening new ways of looking at our climate and how various ecosystems interact. Sensor networks can be applied to water conservation in agriculture by targeting only specific locations that need irrigation. Such networks also can be distributed throughout a seismically active area or used to triangulate bird and animal calls to observe their behavioral patterns.

“The science is really the key piece.” Fay says. “How can we help drive the science forward, and can we use technology not only to make the science better, but also to make the work easier, more accurate? We want scientists to be relieved of worries about the sensors, data transfer, how the software works, how the database works, how you visualize it—all those details to do with infrastructure and technology. We want scientists to actually be scientists.”