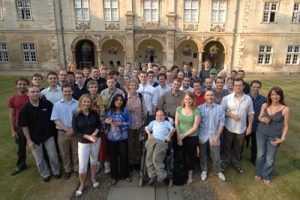 The first Microsoft Research Summer School for PhD students was held in Cambridge, U.K., on 4 July through 7 July 2006. It included a series of talks of academic interest and a posters session that gave invited PhD students the opportunity to present their work to Microsoft researchers and a number of Cambridge academics.

Lectures and posters sessions were public and opened to faculty members and research students from the University of Cambridge. The venue was the Microsoft Research laboratory in Cambridge.

Abigail Sellen is a Senior Researcher in the Microsoft Cambridge Lab in the Socio-Digital Systems, a new interdisciplinary group with a focus on the human perspective in computing. As a group, we are interested in simple technologies and in learning from everyday life to inform the design of systems, which are both useful and compelling.

Abigail joined Microsoft in June 2004 from Hewlett Packard Labs, Bristol. She spent six years at HP researching many different kinds of topics ranging from appliance design to web use to mobile technologies. Prior to HP, she spent seven years at Xerox’s research lab in Cambridge UK (EuroPARC), was cross appointed to the MRC Applied Psychology Unit, Cambridge, and was a Research Fellow at Darwin College, Cambridge. During these years, her research covered many topics including: reading, paper use in offices, videoconferencing design, and computer support for human memory. Much of this work resulted in two books: The Myth of the Paperless Office, and Video-Mediated Communication. Before that, she worked for other corporate IT labs such as Xerox PARC, Apple Computer, and Bell Northern Research and worked on projects involving the design of input devices for 3D worlds, on-line help, and telephone interfaces.

Writing papers and giving talks are key skills for any researcher, but they are not easy. In this pair of presentations, I describe simple guidelines that I follow for writing papers and giving talks, which I think may be useful to you too. I don’t have all the answers—far from it—and I hope that the presentation evolved into a discussion in which you share your own insights, rather than a lecture.

Simon Peyton Jones, MA, MBCS, CEng, graduated from Trinity College Cambridge in 1980. After two years in industry, he spent seven years as a lecturer at University College London, and nine years as a professor at Glasgow University, before moving to Microsoft Research in 1998. His main research interest is in functional programming languages, their implementation, and their application. He has led a succession of research projects focused around the design and implementation of production-quality functional-language systems for both uniprocessors and parallel machines. He was a key contributor to the design of the now-standard functional language Haskell, and is the lead designer of the widely-used Glasgow Haskell Compiler (GHC). He has written two textbooks about the implementation of functional languages. More generally, he is interested in language design, rich type systems, software component architectures, compiler technology, code generation, runtime systems, virtual machines, garbage collection, and so on. He is particularly motivated by direct use of principled theory to practical language design and implementation—that is one reason he loves functional programming so much. He is also keen to apply ideas from advanced programming languages to mainstream settings.

We have developed a Bayesian ranking system that estimates the individual skills of players based on the outcomes of games among teams composed of subsets of the players. The system maintains a belief about the skill of each player by two numbers, their average skill and the associated variance. Approximate message passing is used to compute the updates of the players’ belief parameters after each game.

After presenting the algorithmic aspects of the system, I outline two applications:

Ralf Herbrich is Researcher in the Machine Learning and Perception group at Microsoft Research Cambridge. He is co-leading the Applied Games Group, which focuses on leveraging methods of approximate probabilistic inference for addressing relevant applications both in recreational games and in abstract decision games played in the real world. Ralf has published more than 50 papers in the area of machine learning, kernel methods and Bayesian analysis and has authored the monograph “Learning Kernel Classifiers” published by The MIT Press.

F# is a mathematically-oriented high-performance .NET scripting language that combines features familiar from Python, OCaml, C# and Scheme. Most importantly it gives you access to the entire range of powerful .NET libraries and database tools. This talk is a brief tutorial-style introduction to F# programming.

Don Syme joined Microsoft Research in 1998. Before that, he was a PhD student at the University of Cambridge Computer Laboratory after he I graduated from the Australian National University in 1993. Recently his research has revolved around Common IL and the Microsoft .NET Framework, and in particular the Microsoft .NET Common Language Runtime. He is involved in a number of projects here in Cambridge, including the design and implementation of support for Generics in C#, the CLR, Visual Basic and other languages, the design and implementation of F# and a study of value recursion in safe and semi-safe programming languages.

Rough Guide to Being an Entrepreneur

At some stage, you might want to exploit your ideas by starting a company, just as Bill Gates and Paul Allen did in 1975. It might even be the next Microsoft, or bought by them. I give an overview of the process, explain some of the success factors investors look for, and discuss how to go about writing a business plan and getting off the ground.

Jack Lang is a serial entrepreneur and business angel with high-tech and internet companies based in Cambridge, where he is Entrepreneur in Residence, Centre for Entrepreneurial Learning, at the Judge Business School, University of Cambridge, an affiliated Lecturer and member of the Faculty Board at the Computer Lab and a by-fellow of Emmanuel College. His latest venture is as co-Founder of Artimi, which is making the next generation of ultra wide band wireless chips. Previously he was founder of Netchannel Ltd, an early Interactive TV company that was acquired by ntl: where he became Chief Technologist. Before that founder of Electronic Share Information Ltd, one of the first online brokerages, acquired by E*Trade Inc. Prior to that he started a consultancy (now SAIC UK Ltd) that was involved in the early days of the “Cambridge Phenomenon”, and was a proper academic at the Computer Lab. He is author of “The High Tech Entrepreneurs Handbook” (FT.Com/Prentice Hall 2001). He has other interests in molecular gastronomy and fireworks.

What Is Information Ethics?

Philosophers have recently turned their attention to the moral issues raised by Information and Communication Technologies (ICT). In less than a century, humanity has moved from a state of “submission” to nature, through a state of power of potential total destruction, to the present state in which we have the means and tools to engineer and manage entire new realities, to tailor them to our needs and to shape the future. Largely owing to ICT, our technological power is already enormous and is growing relentlessly. It is already so vast to have overcome the barrier between the natural and the artificial, the real and the virtual. For the first time in history, humanity can now create and control almost any aspect of its environment. Therefore, our moral responsibilities towards the world and future generations are equally enormous. How can we cope with these new ethical challenges? In this talk, I shall provide an answer in terms of “information ethics” (IE), that is, the branch of ethics that deals with moral issues emerging from the impact of ICT on society and human lives. The main point of the talk is that IE is a form of environmental ethics, which forces us to modify our basic conceptions of agent, patient and environment. Four main features of IE are outlined: according to IE,

The talk presupposes no knowledge of philosophical or ethical theories or of any related, technical vocabulary.

Luciano Floridi is an Italian philosopher at the University of Oxford, best known for his research on the skeptical tradition and for his foundational work on the philosophy of information and on information ethics. He is Fellow of St Cross College, Oxford and Professor of Logic and Epistemology, Università degli Studi di Bari. He is the founder and coordinator, with Jeff Sanders, of the IEG, the interdepartmental research group on the epistemology and ethics of information at Oxford, and the founder and director of SWIF, the Italian e-journal of philosophy. He is Vice President of IACAP, the International Association for Computing and Philosophy.

The 150-year-old Four Colour Theorem is the first famous result with a proof that requires large computer calculations. Such proofs are still controversial: It is thought that computer programs cannot be reviewed with mathematical rigor. To overturn this belief, we have created a fully computer-checked proof of the Four Colour Theorem. Using the Coq proof assistant, we wrote an extended program that specifies both the calculations and their mathematical justification. Only the interface of the program – the statement of the theorem – needs to be reviewed. The rest (99.8%) is self-checking: Coq verifies that it strictly follows the rules of logic. Thus, our proof is more rigorous than a traditional one.

Georges Gonthier received his Doctorate in 1988 from Université Paris XI for work on the Esterel reactive programming language. After two years at AT&T Bell Labs, he returned to France at INRIA in 1990. His work includes the optimal computation of functional programs, the formal verification of a concurrent memory management algorithm, and concurrency analysis of the Ariane 5 flight software. Dr Gonthier joined Microsoft Research Cambridge in 2003, where he completed the first fully computer-checked proof of the famous Four Colour Theorem.

This talk presents an experimental programming language (SPiM) for modelling and simulating biological systems. The language is based on a mathematical formalism known as the pi-calculus, which was originally developed to model complex parallel computer systems. The language differs from traditional formalisms for biological modelling, by allowing the components of a biological system to be modelled independently, rather than modelling the individual reactions. This allows large models to be constructed by direct composition of simple components. The language also facilitates mathematical analysis of systems using a range of established techniques, which could eventually shed light on some of the fundamental properties of biological systems. The language is first presented by using a simple graphical notation, which is subsequently used to model and simulate an example gene network and part of an immune system pathway.

Andrew Phillips is a post-doctoral researcher at Microsoft Research Cambridge, where he is currently using techniques from concurrency theory to develop programming languages for modelling and simulating biological systems. Andrew was born in Barbados in 1977 and was awarded a government scholarship to study Engineering in 1995. In 2000, he received a degree in Computer Engineering from the INSA institute of Toulouse, France, together with a postgraduate degree in Computer Science from the University of Cambridge. He pursued a PhD in the Department of Computing at Imperial College London, where he developed an experimental language for specifying and implementing secure mobile applications. He later joined Microsoft Research Cambridge in 2005 to develop programming languages for modelling biological systems, in collaboration with Systems Biology researchers from various external institutions.

Alexander Brändle is the head of the Intelligent Environments group at Microsoft Research Cambridge. Before joining Microsoft in 1998, Alexander was working on systems for uncertain reasoning in the automation industry. He holds a doctorate in Electrical Engineering. His group is exploring and developing key enabling technologies to be integrated in future human inhabited computing environments. Alexander’s personal research focus is in area of ‘end user’ programming technologies and human robot interaction and integration in human environments.