Optics for the Cloud is a programme of research to advance and enable the adoption of optical technologies in the rapidly growing field of cloud computing. The scope of this opportunity includes storage, network, compute, memory and specialized accelerators. The research also spans the entire vertical stack, ranging from optical device fabrication, to optical system and sub-system design, to co-design and integration with the rest of the data center infrastructure and will include new applications enabled by optical technologies.

The world is moving to the cloud at an ever-increasing rate. Microsoft is at the core of this transformation and is continuously building new data centres to keep up with demand. However, most of the core technologies used in these centres today were designed or conceived before the cloud existed. Many of those technologies represent compromises, encumbered by historic design choices pertinent to an antiquated application, and encrusted with features appealing to the idiosyncrasies of many different scenarios. At the cloud scale, there is the scope to create cloud-specific technologies that free us from decades of legacy thinking.

At Microsoft Research Cambridge we built a team to explore Optics for the Cloud. We believe that by taking a holistic view of the needs of the cloud we can create disruptive technologies for the cloud. To achieve this, we’ve assembled a highly inter-disciplinary team to ask the simple question – how can optics for the cloud change the cloud? We’re inventing optical end-to-end systems, across the three primary resources of storage, network and compute, that will underpin the next generation of the cloud.

Project Silica is a collaboration between Microsoft Research Cambridge and Microsoft Azure, building on a previous collaboration with the University of Southampton, innovating a ground-breaking cloud storage system that uses femtosecond lasers to write data into quartz glass which, due to its durable properties, provides long-lasting, easily-readable storage.

The amount of data being generated worldwide is growing exponentially.  The volume is expected to exceed 100 zettabytes by 2023. Simply put, that’s 10 terabytes for every person on the planet.  The challenge is that storing all that data is expensive.  Soon, we could be unable to afford to store it all.  At Microsoft Research, Project Silica is tackling this problem by developing the world’s first data storage technology that has been designed and built from the media up, and specifically for the cloud.

Currently, data storage in the cloud is deployed in multiple tiers based on the type of customer workload that it is best suited for. There are usually at least three or four tiers, and the important workload characteristics are the frequency of datum access (equivalent to the ratio between operations and stored capacity), the latency (delay) permissible for providing data when requested, and the size of the individual data units. Tiers are given names which draw parallels with temperature, as shown below:

Cloud providers present pricing models based on abstracted marginal costs, which enable customers to engage in informed rational behaviour when selecting the appropriate tier. Due to the extremely large data collections used in modern cloud applications, data storage is a very cost-sensitive application.

The rapid expansion of cloud computing, and the corresponding data volumes, is also driving the demand for storage. To date, for both HDD and tape, this demand has been met by advances in the achieved information storage density of the magnetic material. However, the storage density is now very close to fundamental physical limits imposed by the size of the magnetic domains that can be manipulated and successfully read. In the Cold tier, the limited storage lifetime of tape (3-5 years) is also problematic, as data must be regularly transferred from old media to new to ensure data integrity.

To keep up with the increasing demand for archival storage, it is necessary to investigate new approaches to storage that provide properties that are better than or equal to today’s technology, provide greatly extended data lifetimes and reduce the cost per byte. The read/write throughput should be around 100M-1GByte/s to be competitive with existing technology and support the demand. In the Standard and Cool tiers, HDD-based systems are sometimes limited by the number of operations that can be performed per second, so approaches to storage that can improve this rate will be advantageous.

Join Mark Russinovich, Azure CTO, to learn how Microsoft’s Azure enables intelligent, modern and innovative applications at scale in the cloud, on-premises and on the edge. (watch from 0:39:32 – 0:41:52).

Network requirements, both in terms of throughput and latency, are expected to increase significantly in the next few years, driven by new emerging workloads such as large-scale machine learning and resource disaggregation.  These will demand throughputs beyond 100 GB/s and latency below 100 ns.  Hitherto, the industry has relied on exponential scaling of silicon to keep up with increasing traffic demands, but with the expected slowdown of Moore’s Law, novel network technologies with new growth curves that can match the requirements of future workloads must be investigated. Our research aims to re-invent the network that will underpin the cloud in the year 2025 and will meet these key demands via emerging optical technologies. Optics already plays a major role in our technical network infrastructure as the underlying technology used to interconnect racks and data centres across the globe. Our goal is to further improve optics technology by innovating across the whole stack, from new network architectures to new transceivers and optical fibers to deliver higher performance at a lower cost as well as extending its use to new areas such as optical switches and board interconnects to take advantage of their ultra-low and predictable latency, very high bandwidth, and low cost. This effort requires a cross-disciplinary approach combining skills and expertise across the hardware, physics, network, and software domains. If successful, however, this has the potential to revolutionize the cloud infrastructure by providing predictable and uniform high performance (bandwidth and latency) within and across data centres, thus breaking today’s silos (e.g. a single server or a rack) with significant benefits in terms of fault tolerance, resource management and application performance.

As Moore’s Law is slowing down, today’s Cloud operators are eager to explore emerging and promising post-CMOS technologies for computing.

Alternative technologies to traditional CMOS-based computing architectures are often based on physical systems and have the important claim to provide significant processing resources for a limited, yet significant, set of problems.

Optics and its unique properties are widely used in our Cloud network infrastructure as the underlying technology used to interconnect racks and data centres across the globe. We currently have several research projects (Project Silica, Project Sirius, Project Iris), relying on the use of optics to re-invent the network that will underpin the cloud and to investigate new approaches to cloud storage.

Could we use the same unique properties of light to achieve faster and more energy efficient information processing to accelerate some restricted yet popular cloud workloads?

Computing with light is naturally a parallel processing model, inherently a fast operation and of course heat dissipation is much less of an issue in the optical domain. The caveat here is specialization, where only a limited, yet significant, set of workloads can be targeted to claim performance improvements.

For example, the optics community has long known that lenses apply a spatial Fourier transform to the light waves travelling through them, as per figure below.  Thus, a lens computes a function over its input data.  In a traditional von Neumann computer, such a Fourier transform would be computationally expensive to calculate yet is almost instantaneous with light: the potential advantages to computing with optics are clear.

Another potentially super-efficient optical primitive is the vector by matrix multiplication operation, which is characterised by two-terms multiplication and the summations of multiple terms. The two-terms multiplication (or, more precisely, the weighting) operation in the optical domain is achieved by letting an optical signal, representing the first term of the multiplication, going through a variably controlled lossy optical element, representing the second term of the multiplication. Typical examples of optical elements that could be used for the optical multiplication are liquid crystal displays or ring resonators. The desired summation can be implemented using a camera, or more precisely a photodetector,  that can perform coherent or incoherent addition of any optical signal at its input, please refer to the figure below.

As a matter of fact, all-optical vector-by-matrix matrix multiplications were first demonstrated in the 1970s. 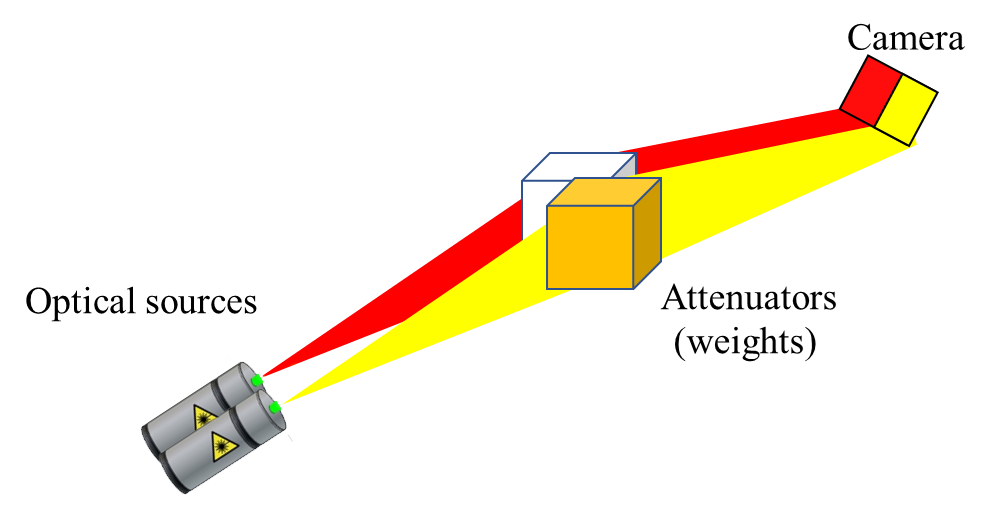 Could these super-efficient optical primitives be integrated as photonic accelerators into end-to-end systems of specific workloads, while still paying off for the heavy overhead due to the interface between the digital input, the optical accelerator itself and the digital output?

Answering this question requires a cross-disciplinary approach combining skills and expertise between the optics community and computer scientists at this exciting interface between physics and computing.

10 March 2020 | “Optical Networking for Machine Learning: The Light at the End of the Tunnel?” at San Diego Convention Center, Expo Theater | Paolo Costa

September 2019 | “Optics for the Cloud: Challenges and Opportunities in the next-generation cloud infrastructure” at DTU Fotonik, Department of Photonics Engineering, Copenhagen | Fotini Karinou

September 2018 | “Challenges and opportunities for photonics in the cloud” at University of Southampton, Future Photonics Hub Industry Day | Benn Thomsen

Optics for the Cloud Research Alliance

Microsoft Research Cambridge has also brought together its collaborations with several university research groups in Europe and the US to create the Optics for the Cloud Research Alliance. This Alliance will investigate and develop optical technologies for the cloud. The Alliance will take a multi-disciplinary approach to tackle big and open challenges, with an aim to enable greater adoption of optical technologies in cloud infrastructure, including cloud storage, network and compute.

Learn more about the Research Alliance