Steve was Technical Director of the European Auto-ID Center (now Auto-ID Labs), the organisation which created the term ‘Internet of Things‘ as it sought to connect every item in the global supply chain to the internet.

At the Auto-ID Center he contributed to the initial specifications for a replacement barcode based around radio frequency identification. The work was sponsored by over 100 international companies, and has subsequently been rolled-out worldwide to augment and in some cases replace barcodes in various aspects of supply chain management. A new organisation, EPCglobal, was set up by EAN and UCC (the barcode custodians) and now manages international standardisation.

Whilst at the Auto-ID Center, Steve initiated the European Adoption Programme to allow European businesses such as Ahold, Carrefour, Gillette, Kraft, Metro Group, Nestlé, Procter & Gamble, Tesco and Unilever, to develop a common approach to EPCglobal roll out.

At Olivetti and Oracle/AT&T Laboratories, Steve spent several years working on the ‘bat’ ultrasonic indoor location system, which was developed to generate fine-grained location information about people and objects in an office environment. A battery-powered tag (the ‘Bat’) is worn by users or attached to equipment. The Bat emits ultrasonic signals when requested by a central controller, and the time-of-flight of the ultrasonic pulses is detected by a number of receivers mounted in the ceiling.

The Bat supports a two-way radio communication channel which also allows limited information to be signalled to and from the user. Through aggressive power saving techniques, an 18 month+ lifetime was achieved from the single Lithium AA cell.

A later incarnation of the Bat system was a cheaper location system based on RFID, which is suitable for many applications. Once again, there is a two-way radio communication system that can support interaction with the user through push buttons, LEDs and a buzzer. This prototype used LF (125kHz) RFID, and an in-house developed 868MHz low-power radio module for communications with the central control system. 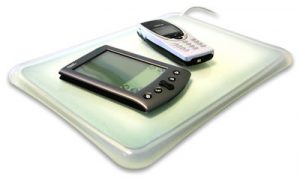 Whilst at Cambridge University, Steve also helped with the design of early prototypes of the Splashpower wireless power system.

Splashpower provided a convenient new way of powering your mobile phone and other portable electronic devices simply by laying them on a single wireless charging platform. This technology was a forerunner of the increasingly ubiquitous Qi wireless power standard. The company was ultimately acquired by Fulton Innovations.

In 1993, Steve built an ‘Interactive Office’ at the Xerox Research Centre Europe at Cambridge (formerly known as EuroPARC). This involved embedding a large number of sensors, such as microphones, movement detectors and pressure sensors into the office environment. These sensors were connected to the in-building electronic network via a specially-developed network interface. In addition, various pieces of electronic equipment such as answering machines and the entertainment system were also network-enabled.

This allowed applications to be developed and run on a server for the office, that acted in various ways to support the office user – for example, preventing incoming phone calls when a meeting was detected. Although many of the ideas explored in this work and the approach taken to their implementation are commonplace today, at the time of this work, they were pretty radical.

Robocup is a competition where teams of wheeled robots play five-a-side football against each other. In the middle-sized league, the robots play with a golf-ball on a pitch the size of a table-tennis table; a camera above the table monitors the players and is connected to a server which can then relay commands to the players via radio. In 1998 Steve designed and built a goalkeeper robot as part of the Cambridge University Laboratory for Communications Engineering Robocup team. The robot was unique in its use of compressed CO2 as a propellant for goal-kicks, and the team reached the semi-finals.

Whilst a graduate student at Cambridge University in 1993, Steve developed a novel image-processing technique called partial summation. Partial summation applies a technique used in computational geometry to pre-process certain types of images so that the subsequent analysis of these images may, under certain circumstances, be speeded-up significantly. For example, median filtering of binary images can be performed independently of the size of the filter, enabling multi-scale filtering to be carried out in significantly reduced time compared with traditional approaches. An example application is the morphological processing of an image of a bare PCB (printed circuit board). 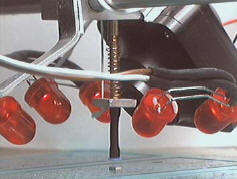 During his PhD at Cambridge University Engineering Department, Steve explored the concept of an ultra low-cost robotic PCB (printed circuit board) assembly machine. In order to compensate for low-cost, low-specification mechanical construction, the machine relied on the use of visual feedback from the assembly head in order to iteratively refine each placement location. Whilst this approach is much slower than that used in traditional PCB assembly automation, it is also much cheaper, making the machine attractive in a number of industry verticals. During the course of the work, a number of vision and adaptation algorithms were explored, in addition to the development of the prototype machine itself.