I’m a researcher at Microsoft Research in Cambridge, England. I started here in Sept 1998. I’m also an Honorary Professor of the Computing Science Department at Glasgow University, where I was a professor during 1990-1998.

I am married to Dorothy, a priest in the Church of England. We have six children.

I’m interested in the design, implementation, and application of lazy functional languages. In practical terms, that means I spend a most of my time on the design and implementation of the language Haskell. In particular, much of my work is focused around the Glasgow Haskell Compiler, and its ramifications.

I am chair of Computing at School, the group at the epicentre of the reform of the national curriculum for Computing in England.   Computer science is now a foundational subject, alongside maths and natural science, that every child learns from primary school onwards (background here).

I use Facebook for non-work networking, but only for people who my family knows too.

I do have a Twitter account, for some reason, but I have yet to find something significant enough to say that it’s worth tweeting.

In all three cases my actual use is minimal, so don’t hold your breath. 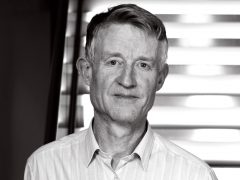 Functional Programming Languages and the Pursuit of Laziness with Dr. Simon Peyton Jones

Episode 7, January 10, 2018- When we look at a skyscraper or a suspension bridge, a simple search engine box on a screen looks tiny by comparison. But Dr. Simon Peyton Jones would like to remind us that computer programs, with hundreds of millions of lines of code, are actually among the largest structures human beings have ever built. A principle researcher at the Microsoft Research Lab in Cambridge, England, co-developer of the programming language Haskell, and a Fellow of Britain’s Royal Society, Simon Peyton Jones has dedicated his life to this very particular kind of construction work. Today, Dr. Peyton Jones shares his passion for functional programming research, reveals how a desire to help other researchers write and present better turned him into an unlikely YouTube star, and explains why, at least in the world of programming languages, purity is embarrassing, laziness is cool, and success should be avoided at all costs.