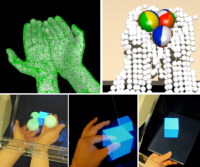 HoloDesk is a novel interactive system combining an optical see through display and Kinect camera to create the illusion that users are directly interacting with 3D graphics.

HoloDesk is an interactive system combining an optical see through display and Kinect camera to create the illusion that users are directly interacting with 3D graphics. A virtual image of a 3D scene is rendered through a half silvered mirror and spatially aligned with the real-world for the viewer. Users easily reach into an interaction volume displaying the virtual image. This allows the user to literally get their hands into the virtual display and to directly interact with an spatially aligned 3D virtual world, without the need for any specialized head-worn hardware or input device. We introduce a new technique for interpreting raw Kinect data to approximate and track rigid (e.g., books, cups) and non-rigid (e.g., hands, paper) physical objects and support a variety of physics inspired interactions between virtual and real. In particular the algorithm models natural human grasping of virtual objects with more fidelity than previously demonstrated. A qualitative study highlights rich emergent 3D interactions, using hands and real-world objects. The implementation of HoloDesk is described in full, and example application scenarios explored. Finally, HoloDesk is quantitatively evaluated in a 3D target acquisition task, comparing the system with indirect and glasses-based variants.