The BBC and partners, including Microsoft, announce the BBC micro:bit – a pocket-sized, codeable computer that allows children to get creative with technology. Up to 1 million micro:bits will be given to every 11 or 12 year old child in Year 7 or equivalent across the UK, for free.

“The simple truth is, being a maker matters. Real computing, doing not just consuming, will drive a creative revolution in this country. That’s why as a key partner in Make it Digital, Microsoft is helping to give a programmable micro:bit device to every year seven child in the country.”

The BBC micro:bit is a small device that can be programmed to light up using a series of tiny LEDs. A fun introduction to programming and making – switch on, program it to do something fun – wear it, customize it, develop new ideas. The first wave of BBC micro:bits will hit UK schools this fall.

To bring the BBC micro:bit to life in 2015, Microsoft has developed an enhanced version of their popular TouchDevelop web application and hosting service. This means the micro:bit has its own dedicated website, Microsoft Azure hosting for all one million micro:bits and a range of online code editors available from most any modern web browser.

Microsoft also has supplied two languages/editors – TouchDevelop, a text-based language, and the Block Editor, a graphical coding language. The TouchDevelop web app holds all the code editors built for the micro:bit, runs the micro:bit simulator, sends the code to the ARM compiler and brings back the compiled files to be sent to the micro:bit. 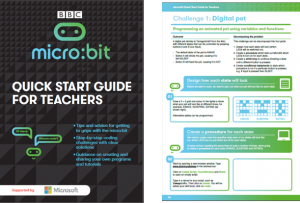 With close to a million micro:bits hitting the classrooms in the Autumn, it is critically important that the Year 7 children are supported by knowledgeable teachers with interesting and engaging projects right from the get go. Microsoft has put together a complete package of materials that can help get teachers up and running and support them through the school year. This includes: 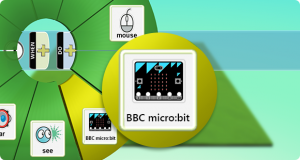