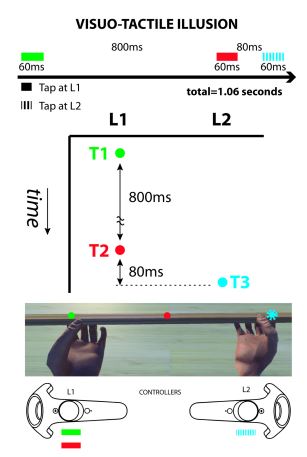 In the real world, our bodies influence how we perceive ourselves and how others perceive us. Our body can also affect estimations of object sizes and distances. But how does our body affect our haptic experience? Here, we examined the modulation of a visuo-haptic illusion of touch on a virtual stick in virtual reality, when participants were embodied in an avatar and when they were not. During the experiments participants (n = 49) received successions of three taps delivered from two independent controllers while they saw visual stimuli presented sequentially along the virtual stick. The stimulation pattern resulted in a robust illusion of tapping directly on the virtual stick. After each trial, participants were asked to report where they perceived the taps. We found that participants in both the body and no-body conditions displaced the second tap toward the center of the stick, and reported similar levels of certainty about their reported location. However, the illusion of touch on the stick, as measured by the reported location of the tap, was significantly stronger for those who had a virtual body than those who did not. Therefore, our study shows that avatar embodiment can change haptic perception.