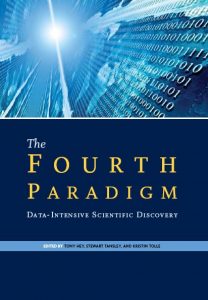 The speed at which any given scientific discipline advances will depend on how well its researchers collaborate with one another, and with technologists, in areas of eScience such as databases, workflow management, visualization, and cloud computing technologies.

In The Fourth Paradigm: Data-Intensive Scientific Discovery, the collection of essays expands on the vision of pioneering computer scientist Jim Gray for a new, fourth paradigm of discovery based on data-intensive science and offers insights into how it can be fully realized.

Critical praise for The Fourth Paradigm

“The individual essays—and The Fourth Paradigm as a whole—give readers a glimpse of the horizon for 21st-century research and, at their best, a peek at what lies beyond. It’s a journey well worth taking.”

From the back cover

“The impact of Jim Gray’s thinking is continuing to get people to think in a new way about how data and software are redefining what it means to do science.”
— Bill Gates, Chairman, Microsoft Corporation

“I often tell people working in eScience that they aren’t in this field because they are visionaries or super-intelligent—it’s because they care about science and they are alive now. It is about technology changing the world, and science taking advantage of it, to do more and do better.”
— Rhys Francis, Australian eResearch Infrastructure Council

“One of the greatest challenges for 21st-century science is how we respond to this new era of data-intensive science. This is recognized as a new paradigm beyond experimental and theoretical research and computer simulations of natural phenomena—one that requires new tools, techniques, and ways of working.”
— Douglas Kell, University of Manchester

“The contributing authors in this volume have done an extraordinary job of helping to refine an understanding of this new paradigm from a variety of disciplinary perspectives.”
— Gordon Bell, Microsoft Research

Microsoft Research is honored to provide initial website hosting for this book launch.