We’ve got a couple of great new features available now in the Microsoft Translator apps for iOS, Android, and Amazon Fire—Phrasebooks and the Bilingual Dictionary.

If you’re trying to communicate in a language you don’t understand, phrasebooks can help you find the sentence, phrase, or word(s) you’re looking for quicker than ever.

If you are a language learner, the new bilingual dictionary can help you find the perfect word so that you can communicate better than ever before. 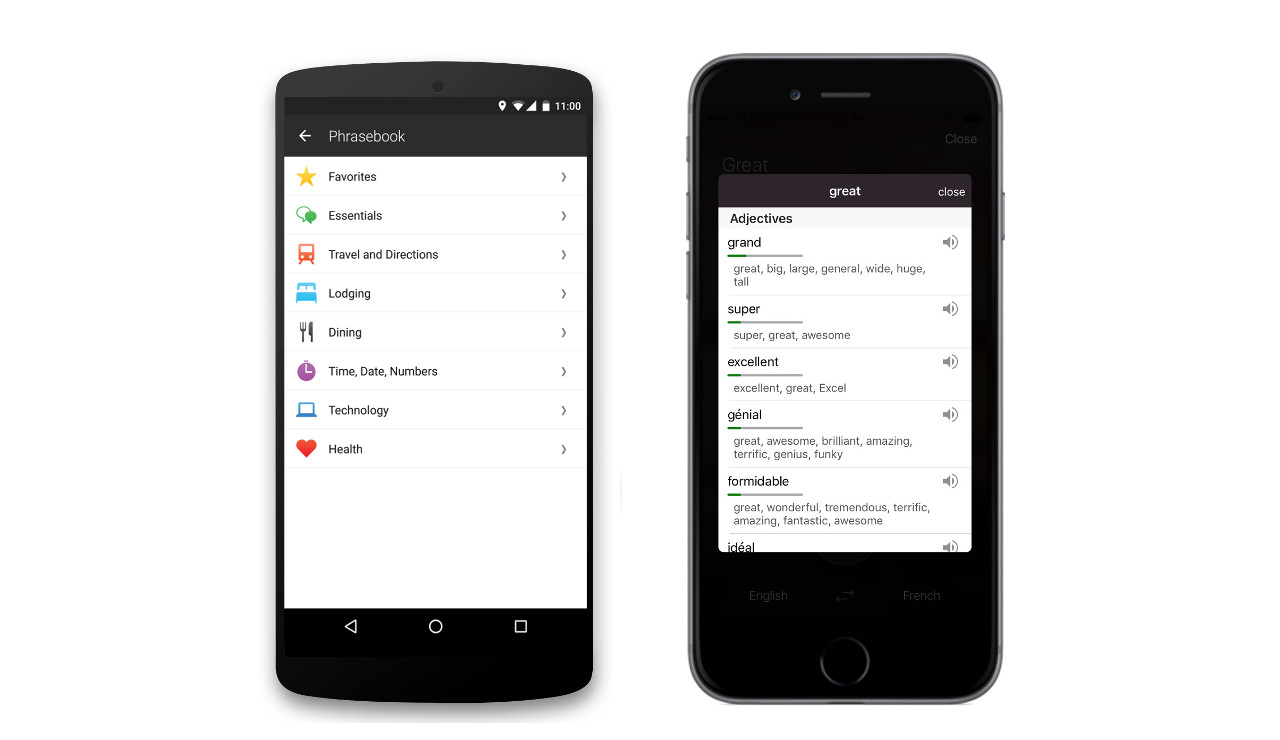 When you’re travelling, it’s always handy to have useful words and phrases at the ready. That’s why we are adding the phrasebooks feature to the Microsoft Translator apps. Phrasebooks give you quick access to everything you need to get around, sorted by topic. You can even save the ones you think you’ll need the most to a Favorites screen for even quicker access.

Once you locate the phrase you need, you can display it full screen so that it can be read by the person you are trying to communicate with, or even play the word or phrase aloud in its native accent if the language is supported by our text to speech technology.

You can even share the translation using your messenger, social media or email apps, or copy and paste it to use in another app.

Communicate better with the bilingual dictionary

If you’re learning a new language, the new bilingual dictionary feature can help you bring your communication to the next level. The feature displays alternative translations to or from English, examples of words in context to help you choose the perfect translation and even provide an example of translated sentences using the word.

The feature has been available in Translator for Bing since March, and is now available in the Microsoft Translator apps so you can have access to the dictionary on the go.

For example, let’s say you are translating the sentence, “That’s great!” into French. The English word “great” could mean many things– excellent, glorious, large, etc. so there might be several different ways you could translate it. Using the Bilingual Dictionary you could quickly see a list of alternative translations to the word “great” to come up with the perfect way to say exactly what you mean. “C’est super!”

If you already are familiar with English and one of the 50+ languages supported by Microsoft Translator, the new dictionary feature can help you find the perfect word in an instant.

Note: Because this feature depends on a significant amount of parallel language data, the feature is only available to or from English.

Of course, these new features are in addition to all of the capabilities already present in Microsoft Translator. You can use the app to translate typed or spoken text, you can translate images from your device’s camera such as menus and signs or saved images from the internet, and even carry on full, translated conversations. The app also features downloadable language packs, powered by deep neural networks, so you can translate even when you’re not connected to the internet.