In February, the Office Global Service & Experiences (GSX) team released the Translator for Outlook add-in, showcasing the launch of Outlook Mobile add-ins. While this was developed, and released outside the normal feature process, given the enthusiastic response from early users, the team wanted to share the announcement more broadly to the Outlook for Windows, Mac, and web audiences, and let you know that it’s also coming soon for Android!

What is Translator for Outlook?

Translator for Outlook is an add-in that enables you to translate email messages on the fly. It’s great for anyone who works in a second language every day and wants to read messages in their native language. Examples include international teams and companies, exchange students, pen pals, and language learners.

The add-in works across all Outlook platforms:

Outlook on the web (O365 and Exchange)

Install it once from the Office Store, and it’ll be available automatically wherever you use Outlook.

The GSX team partnered closely with Microsoft Translator to bring this to life, and the add-in now supports 60+ languages for translation.

Language auto-detection. Email content is a bit different than website content, in terms of both formatting and language composition, and Translator for Outlook strives to accommodate that. For example, you could be on an email thread with global colleagues—such as a modern Outlook Group, or perhaps an interest-based distribution list—where different languages are mixed together. When you want to read that whole thread in your native language, shouldn’t it just work? Translator add-in for Outlook achieves that while keeping the interface super simple.

Cross-device experience. If you use Translator across devices (with the different Outlook apps), you’ll notice that there’s a different interface for the “desktop” and “mobile” flavors (plus some behind-the-scenes performance optimizations)—but wherever you use it, the capabilities are equal. 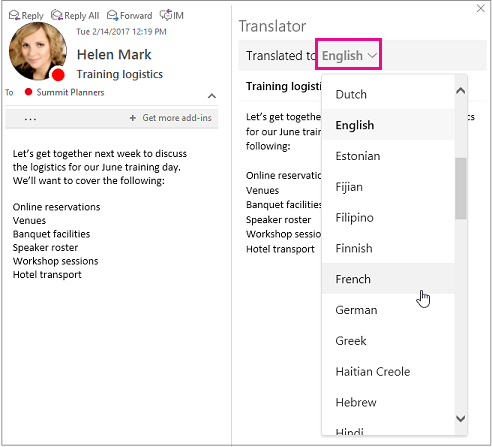 Anyone with an Outlook.com, Office 365, or Exchange account (not just subscribers!), plus any of the Outlook apps mentioned above.

If you’re having trouble installing the add-in, please check out the Troubleshooting section in the “How to” links below.

How to use & help – Translator for Outlook on Mac, Windows, and the web

How to use & help – Translator for Outlook on iOS

How to install an Outlook add-in

All feedback is greatly welcomed and appreciated! We’re excited to hear what you think. Please let us know if you have any questions or comments.