In December 1944, a powerful typhoon surprised the American fleet fighting in the western Pacific. By the time it passed, the storm had sunk three destroyers, killed 790 sailors, and damaged nine other warships. With today’s sophisticated tropical cyclone (TC) forecasting in place, the damage in 1944 could have been avoided.

The U.S. Navy is the largest and most powerful navy in the world, with 290 deployable combat vessels and more than 3,700 operational aircraft. Nonetheless, today—just as it was 60 years ago—this fleet is at risk of damage from severe storms unless accurate and timely predictions are provided to the fleet. 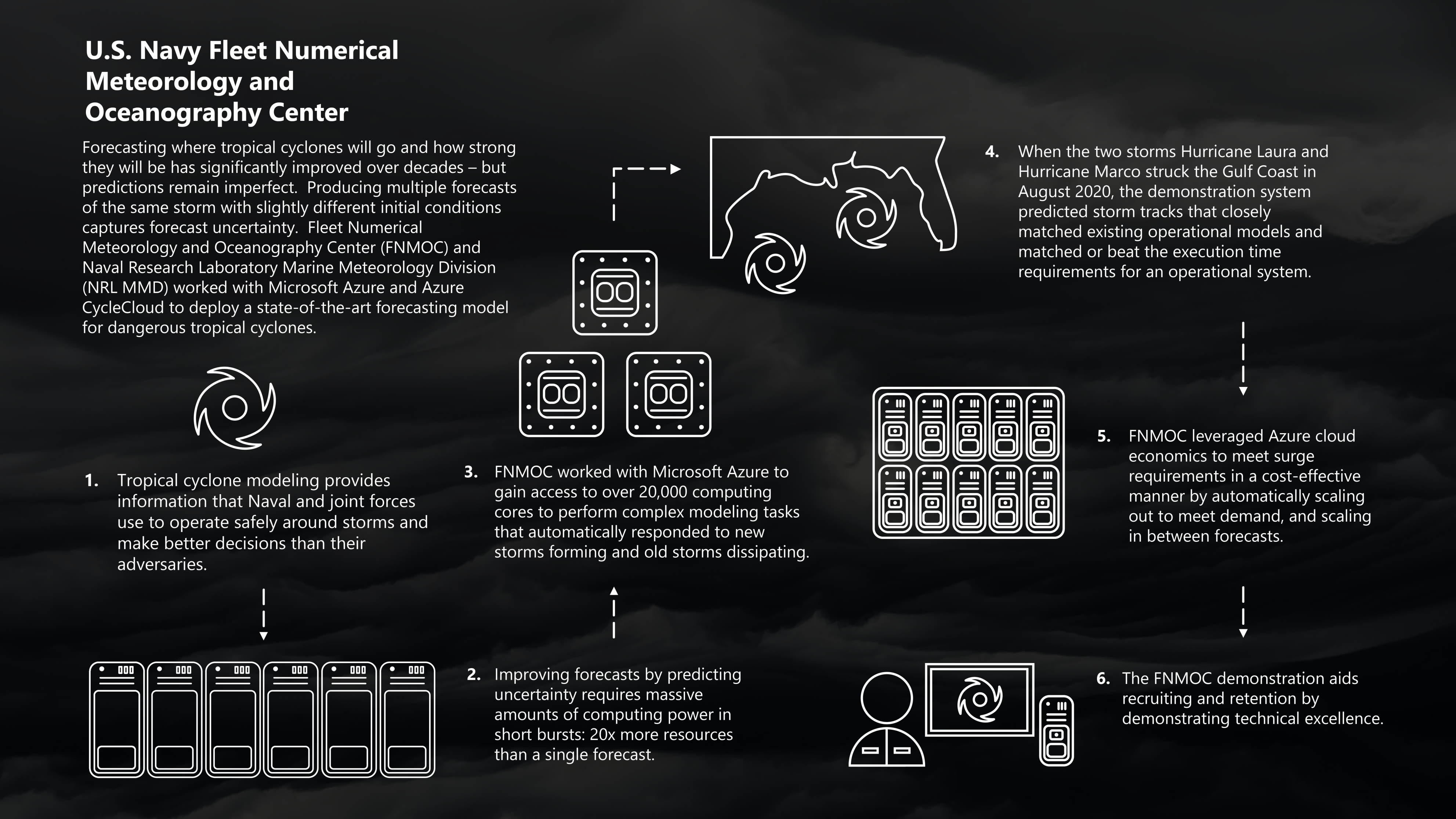 Tropical cyclone modeling provides environmental information that Naval and joint forces use to operate safely around storms and make better decisions faster than their adversaries.

However, forecasting tropical cyclones poses unique computational resource challenges. “Tropical cyclone modeling is an area where it's hard to know how many there are going to be at any given time,” says Bill Kerr, technical director for FNMOC. “It's an area where we either have to buy a lot of extra computing and keep it on-premises, or we have to use something like a cloud solution so that we can surge that capability when there are more storms. Developing that surge capacity was the problem we addressed with this approach.” In particular, the Navy wanted to improve its ensemble TC forecasting capability; ensemble forecasts entail multiple, simultaneous runs of complex mathematical models and require large amounts of computing power in discrete bursts.

To meet that demand, Kerr and FNMOC turned to Microsoft Azure and Microsoft CycleCloud, a tool for simplifying management of high-performance computing workloads. “We went from a relatively low number of computing cores to more than 20,000 cores when performing the ensemble predictions,” says Kerr. “With CycleCloud, we were able to bring a lot of cores online and surge our capacity. We could run our cyclone ensemble model 84 times in a six-hour period, which we would be very challenged to do with other systems.”

“We went from a relatively low number of computing cores to more than 20,000 cores when performing the ensemble predictions. We were able to bring a lot of cores online and surge our capacity. We could run our cyclone ensemble model 84 times in a six-hour period, which we would be very challenged to do with other systems. ”

On Saturday, August 22, 2020, Hurricane Laura and Hurricane Marco were expected to make landfall along the Gulf Coast within the next week. The FNMOC-NRL-MS team used the opportunity to showcase the Azure-powered weather modeling capability. Azure helped the team quickly disseminate ensemble track and intensity predictions. The results were impressive, including:

Furthermore, it helped the FNMOC team demonstrate considerable technical expertise. “Microsoft Azure super-compute technology is state-of-the-art,” says Kerr. “We are meteorologists, oceanographers, and computer scientists who are really excited about using it. It’s something that we can bring to the workforce, and they are interested in learning and applying.”

This U.S. Navy-Microsoft partnership, which began in September 2018, is a collaborative effort bringing together experts from FNMOC, the Naval Research Laboratory, Navy Commercial Cloud Services , Navy Facility & Engineering Command, and a range of Microsoft Federal organizations.


Using Microsoft Power Apps, the USPS Office of the Inspector General developed a powerful monitoring and visualization tool for measuring the performance of the United States Postal Service (USPS) during the 2020 election.