How many times have you tried to move an image or a chart in Word and gotten frustrated when it unexpectedly landed somewhere other than where it was dropped?  Working with images is one of the top pain points that we hear about from customers, so in the new Word, we’ve simplified the experience with 3 great new features:

Our first step in simplifying the way you work with images was to add the Layout Options button.  This button appears at the upper right of any image, video, shape, chart, SmartArt or textbox that you select and gives you quick access to the text wrapping options.

In prior versions of Word, images were inserted as “In line with text” by default.  Inline images are treated exactly like a character of text, which means their position is constrained to the lines of text on the page.  Great for predictability, but not so great if you want to place the image in a more interesting place on the page, like the top right corner, or if you want the image to look integrated with the text in the document.

For many versions of Word, we’ve offered the ability to wrap text around images in a variety of ways.  In the new Word, we’ve made it even easier to find those options and quickly switch between them.  Simply click the Layout Options button and choose one of the six choices in the call-out under “With text wrapping” 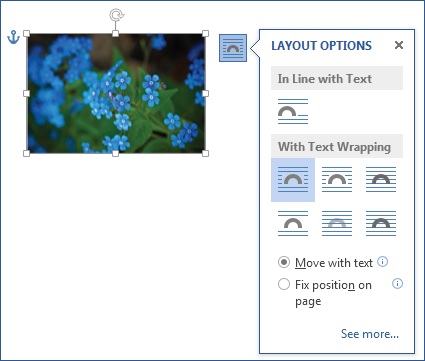 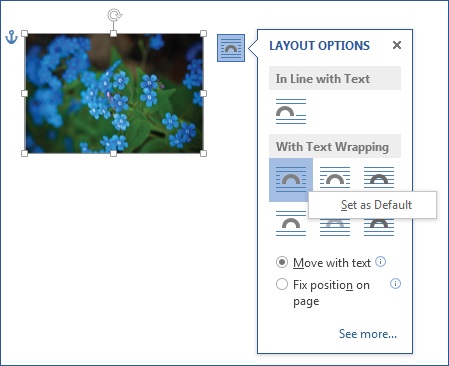 Once you switch to one of the “With text wrapping” styles, you’ll notice two things:

Images that have one of the text wrapping styles applied are referred to as “floating”.  Other than the obvious visual distinction between inline and floating images, they are also treated differently under the covers.  As I mentioned above, inline images are just like oversized characters.  Floating images, however, are attached to the text by a hidden character that we refer to as the anchor.  In past versions of Word, you could go into Word’s Advanced Options dialog box and turn on the display of the anchor character.  To make this a little more obvious, we’ve turned it on by default in the new Word.

Knowing where the anchor is on the page can help put you in control of how your image behaves as you edit the document. The most important rule to remember about anchors is that an image and its anchor always have to be on the same page.  This explains why sometimes, when you add or remove text in a document, an image will suddenly jump to a different page.  What has happened is the text containing the anchor was moved to a different page and took the image along for the ride.

Move with text vs. Fix position on page

The floating text wrapping styles control the way that an image interacts with the text in your document – whether text can flow around all sides, only on the top and bottom of a figure, or if the image is above or below the text.  But there’s another piece to the puzzle of controlling image behavior: what happens to the image when text is added or removed from the document?  Sometimes, you want the picture to remain relative to the text – in other words, move up and down on the page along with the text where it is anchored.  In this case, you’ll want to choose the Move with Text option in the call-out.  Other times, you might want the image to be relative to the page – in other words, always stay in a certain spot on the page it’s anchored to, like the in the top right corner or in the center of the margins.  In these cases, you’ll want to choose the Fix Position on Page option.

Regardless of which option you pick, just remember that the text the image is anchored to always has to be on the same page as the image.  So if you move the text containing the anchor to a different page, the image is going to move as well.

Without a doubt, my favorite feature in the new Word is Live Layout.  In the past, when you moved a floating image in a Word document you would see a semi-transparent “ghost” of the image moving around on top of the text:

When you dropped the ghost, the rest of the document content would update – which sometimes lead to unexpected results and meant it could take a couple of tries to position the image just right.

With the new Word, when you move a floating image, you’ll see the layout of the document changing in real time so you can position your image with confidence on the first try.  Live Layout also works for resize and rotation of both inline and floating images, as well as for resizing table rows and columns.  Give it a try and tell us what you think!

Using Live Layout, floating images can be placed nearly anywhere on a page, but there are a handful of places where you’re more likely to want to place them: aligned to interesting areas like the margins or edge of the page, centered on the page or aligned with a paragraph of text.  You can use Live Layout to help accomplish this, but we’ve also added some handy alignment guides to help make sure you hit exactly the spot you’re aiming for.

As you move your image around the page and reach one of the alignment locations, you’ll see the green alignment guide lines appear.  Here, you can see that the image is aligned to the top of the first paragraph and the left margin. 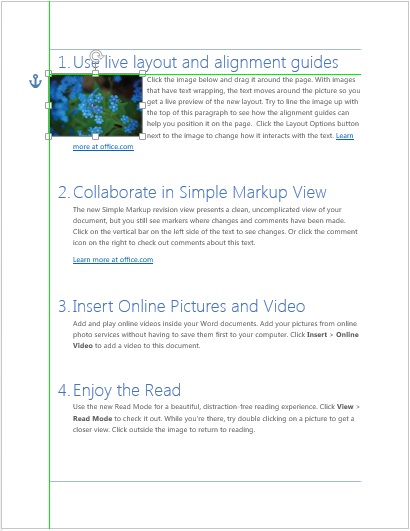 If you are ever wondering if an image is actually aligned to something, just click on a hold for a second: any guides that it is aligned with will appear.

I hope you’ll spend some time trying out our improvements in the Office Customer Preview and tell us what you think. If you’re interested in learning more about inline and floating images, take a few more minutes to read these posts:

The figures feature crew is excited to share all the improvements to working with images with you!