Theresa Estrada, a program manager on the Word team, writes today about the basics of working with graphic objects–shapes, text boxes, pictures, and more. This is the first of a series of posts about graphic objects.

Figures, also called graphic objects, can add a ton of pizazz to a document, but they don’t always behave the way you might expect, which can be incredibly frustrating. With a little behind-the-scenes information, you can put your figures in their place.

What do I mean when I say “figure”? A figure is any type of graphic object that you can insert in a document, except for tables. That includes shapes, text boxes, pictures, clip art, charts, SmartArt, and WordArt.

In terms of how figures behave in your document, there are two basic types:

You can change a figure’s behavior by using the Wrap Text menu in the Arrange section on the Format tab, which appears when you select the figure: 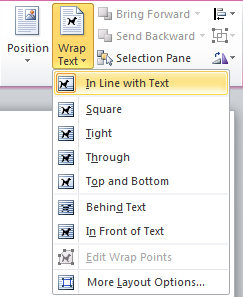 Figures that use the Square, Tight, Through, Top and Bottom, Behind Text, or In Front of Text wrapping style are all considered floating. So how do you know which option to use?

In line with text, or inline, is the default behavior for pictures, clip art, charts, and SmartArt. When a figure is inline, it is treated exactly the same as any other character in the document. For example, if you insert a picture like the cute dog below, it has to actually be on a line. The line’s height increases to accommodate the picture, and the picture moves with the text around it. The figure will respect any formatting applied to the paragraph it is in, such as aligning the paragraph in the center of the page. 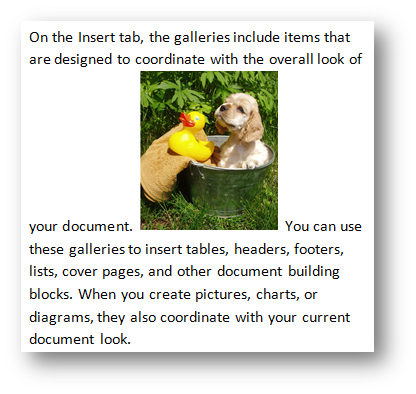 Inline figures’ behavior is familiar and predictable, but the downside is that they are tied to the lines of text. This means you can’t position them in many places on the page without resorting to fancy layout tricks. These figures don’t usually look integrated with the document, since the text doesn’t wrap around them. Finally, there is no way to force an inline figure to stay in a specific location.

Floating figures are incredibly flexible in how they can be positioned, and they solve most of the problems related to inline figures. However, this flexibility can sometimes lead to surprising results.

I’ll spend the next few blog posts demystifying the options related to floating figures, including:

— Theresa Estrada is a program manager on the Word team who spends most of her days (and some nights) studying how users work with figures in their documents.