We know that power users have unique needs to run efficiently and we take the feedback we hear seriously. Much of that valuable feedback comes from the Windows Insider Program. Today, we are very excited to announce a new edition of Windows 10 Pro designed to meet the needs of our advanced users deploying their Workstation PCs in demanding and mission-critical scenarios. Windows 10 Pro for Workstations will be delivered as part of our Windows 10 Fall Creators Update, available this fall. 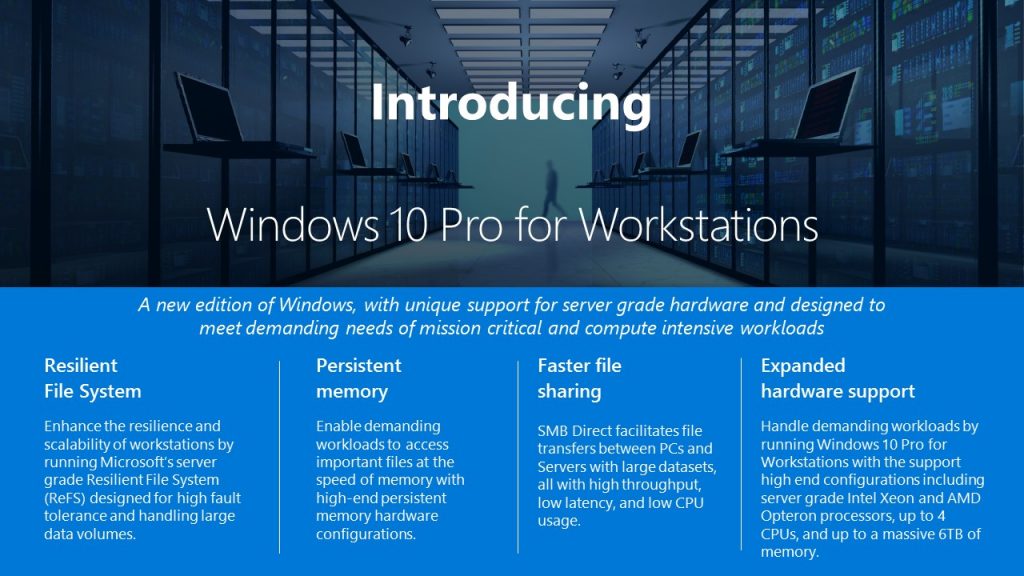 The value of Windows 10 Pro for Workstations is directly aligned to increase the performance and reliability of high-end PCs, with the following features:

Performance is a very important requirement in this new world of fast-paced innovation and we will continue to invest on Windows 10 Pro for Workstations to enable Windows power users to maximize every aspect of their high-performance device. Windows 10 Pro for Workstations utilizes significant investments, that Windows has made in recent releases, for scaling up across a high number of logical processors and large amounts of memory. Our architectural changes in the Windows kernel take full advantage of high-end processors families, such as Intel Xeon or AMD Opteron, that package a high number of cores in single or multi-processor configurations.

Thank you to our customers and Windows Insiders for your feedback.  We look forward to continuing to hear from you.

From privacy to manageability, these are the five areas you have to rigorously examine when evaluating the browser you want your organization to use for accessing corporate apps and data.

Today, we are excited to announce that the Microsoft Family Safety app, designed to help you protect your family’s digital and physical safety, is available to download on iOS and Android.