Let’s HereHere It for NYC

If any city can be called opinionated, it would be New York City, so it’s somehow inevitable that HereHere is making its debut in the Big Apple. It’s Friday in Manhattan, and despite reports of several broken parking meters on its streets, the Upper West Side is pretty relaxed. Greenwich Village, however, is tense about seeing so many dogs off leashes. That’s how HereHere expresses each neighborhood’s reaction to its own civic data.

The project focuses on driving hyperlocal, real-world engagement to encourage civic discourse. The project comes from Microsoft Research’s Future Social Experiences Labs (FUSE Labs). Kati London is a senior researcher and the lead for HereHere, which began in July 2013.

“HereHere NYC introduces daily neighborhood engagement with a light touch,” London says. “It takes neighborhood-specific public data, and it enables the neighborhoods to communicate how they’re doing—expressed through text and cartoonlike icons. People can receive the information via a daily email digest, neighborhood-specific Twitter feeds, or status updates on an online map. We want to understand how it changes or impacts the way people relate to their community when they can interact with data in this way.” 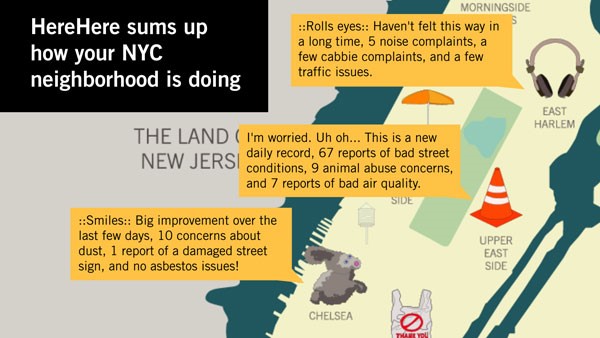 Images and text descriptions on a map express the moods and topmost issues for each New York City neighborhood.

The data London cites is New York City’s 311 non-emergency data stream, which takes as its input New York residents’ emails, phone calls, and text messages sent to communicate issues to city authorities. Each day, HereHere pulls 311 data for each neighborhood and identifies the most compelling, important 311 request types, and the system generates cartoons and text that represent a neighborhood’s characterized reactions. “Think of it as a meta-status update for the day—a simplification of issues in your neighborhood compressed into a text that you might get from a friend,” London explains. “The idea is that we are inundated with all kinds of data in our lives, and it’s overwhelming. Characterization helps bring immediacy and a human scale to information. When the Lower East Side says it’s totally cool with a few vermin complaints, we’re giving a human voice to the neighborhood which, hopefully, will stimulate conversations about issues.”

HereHere’s goals are to study how characterization can be a tool for data engagement. At the same time, researchers want to understand what sort of light, daily rituals are effective for connecting people to hyperlocal issues, as well as how to create compelling stories with data that can engage larger communities. These have been ongoing questions for London, whose career has focused on designing playful or disarming interactions that engage people or communities that might not bother getting connected without such interactions.

“In a world with a billion sensors, how will we make sense of it all?” asks Lili Cheng, general manager of FUSE Labs. “How will we make the data useful to improve our life, community, and the world at large? HereHere focuses on making sure anyone can understand civic data by changing the way we model and represent complex information at the human, social scale. We believe that if everyone can relate to complex data analysis and results in more human terms, we might have a better shot at using the data and sensors to anticipate new troubles and solve meaningful problems.”

Data with a Point of View

In fact, HereHere NYC is built on top of another research project London has been leading since the spring of 2013, called Project Sentient Data (PSD). That research platform translates complex data streams into human-readable output to help researchers explore the new kinds of applications and interactions that can be made when ecosystems of data are understood in terms of emotion states, personalities, and relationships.

PSD is data-agnostic and accepts any kind of data stream, either event-based or continuous. Designers and developers can select from default personas or invent characters in the system with particular responses to sets of data position, trends, and pace.

These affirmed not only the technology concepts behind PSD, but also the breadth of opportunities for new products and experiences that intelligently communicate the most pertinent information in the most appropriate way—from a human perspective.

Looking for Diverse Ways to Engage with Data

London always has enjoyed being at the intersection of social design, networked data, and civic engagement. She brings a wealth of diverse experiences to FUSE, having worked with organizations such as the U.K. Government, the Knight Foundation, MTV, and New York’s Museum of Modern Art. Before joining FUSE in May 2013, London helped start, grow, and run Area/Code Games until it was acquired by Zynga. She became director of product for that social-game developer’s New York City studio and worked on CityVille when it was at its peak of 20 million active users daily. London also teaches graduate-level classes on Persuasive Technology and on Design Patterns for Autonomous Objects at ITP. 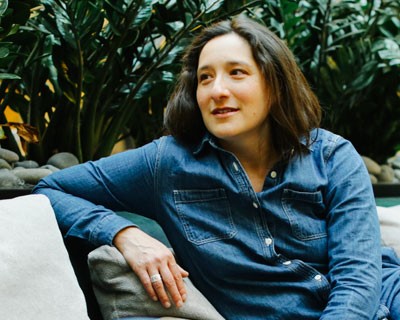 “I’m interested in community,” London says. “New York is a really vibrant community, for example, but I’m also interested in the edges, where there might be an opportunity for people to get more involved or see things from different perspectives. A lot of my work has been focused on things like driving real-world engagement and participation, using new technologies in accessible and, hopefully, surprising ways.”

Some of London’s past work, such as the hyperlocal projects funded by the Knight Foundation, involved games motivating people to be more knowledgeable about hurricane preparedness or used social mechanics and a real-world local currency to build person-to-person and person-to-local-business connections.

As for making a city neighborhood express itself through cartoons and text, it’s not the first time she’s given personality and expression to a non-human entity.

“My other interest is designing systems that enable users to experience the world in a way they otherwise could not,” she says. “I worked on a system called Botanicalls that gives a human voice to plants based the plant’s botanical characteristics. It translates data from a networked sensor to express needs—such as water or light. So if the plant needs watering, this enables it to make that request via texts, tweets or by making phone calls using a human voice.”

HereHere NYC will be launched on March 10.

“We’re eager to get people using it and seeing how it impacts them,” London says. “Will they continue to use it? Will it provoke conversations within the community or discussions across communities? The interface is mobile-friendly and it’s particularly easy for users to post or tweet what a neighborhood is saying today. Each neighborhood also has a Twitter account you can follow and tweet out.”

For HereHere—or for any research project –there’s always more functionality to build. It’s an iterative process that requires feedback. London and her colleagues have been working with community members and beta testers throughout the design process, and she looks forward to getting feedback from a broader range of users for the next phase of iteration on HereHere.