This project has been funded and supported by Microsoft Research in collaboration with University California at Berkeley and Moscow State University.

We envision a world where scientists, researchers, students, and teachers collaborate through ChronoZoom to share information via data, tours, and insight. Imagine a world where the leading academics publish their findings to the world in a manner that can easily be accessed and compared to other data. Imagine a tool that allows teachers to generate tours specific to their classroom needs. This is the potential of ChronoZoom.

ChronoZoom is an incubation project that is being deployed in the spirit of “launch and learn.” Some big questions we have considered in developing ChronoZoom include:

Some of the possible future features could enable users to:

Microsoft Research and the ChronoZoom Project promote the establishment of relationships with academics and other partners (like publishers, researchers, museums, broadcasters, NGOs, foundations, and other organizations that have rich digital media content that crosses the sciences and humanities) to create valuable user experiences with this new technology. As data gets added to the platform, others can share access to enrich their experiences as well.

In early 2009, Roland Saekow decided to take the Big History course from Walter Alvarez at the University of California, Berkeley (UC Berkeley). Walter had created a series of timeline handouts created with a number of different methodologies. Fascinated, Roland was inspired to dedicate his student project to the study of timelines and thus sparked the inception of ChronoZoom as a way to examine the concept of Big History.

Roland and Walter began to discuss ideas for an interactive timeline application and often exchanged drawings on the blackboard after class or quick sketches during office hours. Walter soon began using Adobe Illustrator to create mockups with limited zoom capability, but quickly discovered that the current graphics applications did not have a fraction of the ability to zoom on the needed timescale.

Walter and Roland turned to the Office of Intellectual Property and Industry Research Alliances (IPIRA) at UC Berkeley, and put together a description of the project and rehearsed a demonstration of the prototype that they had built.

The response from IPIRA group was phenomenal. IPIRA helped Walter and Roland arrange a conference call with Microsoft Research. They produced a seven-minute video that explained both the Big History timescale problem as well as an initial prototype—and ChronoZoom was conceived.

IPIRA helped Walter and Roland arrange a conference call with Microsoft Research. They produced a seven-minute video that explained both the Big History timescale problem as well as an initial prototype—and ChronoZoom was conceived.

A small but highly dedicated team at Microsoft Live Labs produced the first version of ChronoZoom. It was capable of zooming from a single day all the way back to the Big Bang. This impressive accomplishment was achieved in time for Walter’s Faculty Research Lecture, where ChronoZoom made its worldwide debut. Walter had been selected as one of two faculty members to give the annual talk to the UC Berkeley community in 2010.

UC Berkeley wanted to create an intuitive, easy-to-use, dynamic cloud service that could have multiple data sets available. In the alpha attempt, we focused on an extensive back end that could handle hundreds of thousands of terabytes and multiple data types, but ultimately, the user interface was far too complicated.

The team changed focus to an intuitive user experience on a very easy-to-use tool and then expanded to include members of the humanities and science communities who were interested in using ChronoZoom for research and teaching.

The Journey to ChronoZoom Beta

The Microsoft Research Connections team helped establish the collaboration between the Microsoft Live Labs and UC Berkeley teams. With an investment in a dedicated engineering effort as well as funding for student contributions, the next phase of ChronoZoom was secured.

It was agreed that Berkeley would continue to be the primary visionary of the project, but would take on an additional role of content management. The power of ChronoZoom would only be evident if the content and the stories they told were compelling, and so a group of students were employed to research, collect, analyze, and finally create the content elements inside the ChronoZoom beta version.

The Live Labs team at Microsoft had been disbanded and so the project was in need of new technical leadership. The Microsoft Research Connections organization had been growing their own top-notch engineering team, and this team brought to bear more than 50 years of collective software development experience to the effort.

As the project goals and strategy unfolded, we knew that we needed to react to changes in the technical strategy in the market if we wanted it to have a viable future. The solution was to rebuild ChronoZoom from the ground up to take advantage of the power of Windows Azure for flexibility and scalability on the back end with HTML 5 and rich UI client technology to support the demands of a complex, infinite-zoom canvas and interface. We learned that ChronoZoom needed to focus on scalability and user interface.

The decision to use HTML 5 had its share of drawbacks, and ultimately resulted in the need to re-evaluate the resource needs and skillsets required. We had a number of challenging obstacles to overcome. To fully realize the concept of ChronoZoom, developers had to create complicated math algorithms that could manage dynamic timeline behaviors as well as difficult scenarios such as leap years, no year 0, and Before Common Era timeline.

We contacted the development team from Moscow State University and these students greatly helped advance the project during the latter half of 2011. They learned HTML 5 and how to integrate Jscript to produce quality animations and functionality. The team was fortunate to have the opportunity to bring on a new set of highly skilled student developers from Lomonosov Moscow State University. The complexity from both a technical and usability standpoint is immense in this project, and what might seem like a relatively short development cycle was pre-empted by a lot of hard work, re-work, and sometimes starting over. The philosophy we have used is to iterate regularly, obtain feedback at every chance, and to consider design and usability as a first priority. As a result, ChronoZoom beta is ready for mass consumption and feedback, structured to scale up to petabytes of content, and architected for the future of personal computing.

“With ChronoZoom, you can browse history, rather than digging it out piece by piece.”

Q. Why does the animation appear slow or jittery on my computer?

A. ChronoZoom is designed to support computers that meet the hardware requirements for browsers that support HTML 5. On some computers, the graphics may be slower or less smooth than intended due to limited memory, processor power, or graphics capability.

Q. Why don’t the graphics perform well in Firefox 10.x?

The following important contributors have made ChronoZoom possible. 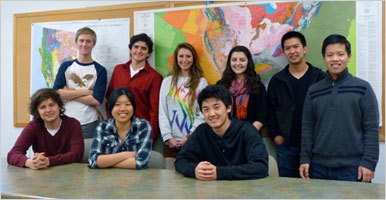