What does it take to make it to the “decisive round for the finest few” in the Beauty of Programming Contest 2016? Earlier this year, 60 young experts gathered at the Microsoft Shanghai campus to find out.

The Beauty of Programming Contest (BoP) 2016, with the theme “Intelligent Cloud,” was jointly hosted by the Ministry of Education of China, Microsoft, and IEEE. This year’s event attracted more than 20,000 students from 150 colleges and universities. For the first time, BoP included a competition for students majoring in subjects other than computer science. Fifteen finalists, who major in subjects such as industrial designing, advertising, and management information systems, were regrouped with their counterparts from the programming competition to form new teams for the finals. At the same time, a number of students from the United States were invited to form joint teams with students from China for a “friendlies” session.

Finalists from the 2016 Beauty of Programming contest

Samuel Shen, Chief Operating Officer & Managing Director of Cloud and Enterprise, Microsoft China, said that cloud computing and big data, both at the core of a new generation of information technology, are driving changes in traditional industries as well as vigorous development in emerging industries. The competing teams were directed to program projects built on Microsoft Azure; apply big data, Microsoft cloud technologies, and intelligent cloud services; and solve a practical problem.

The last round of the competition required the finalists to choose one of two challenging scenarios: “Build a smart family e-album” or “Perform a massive academic data analysis and visualization.” Teams chose their topic, and with that a 26-hour programming marathon began.

“Taking part in the Beauty of Programming was my first time collaborating with programmers. It was an opportunity that combined sense and sensibility, design and coding,” said UX designer Xuelun Fu, a student in the Program of Integration Innovation who was selected from the BoP creativity competition. 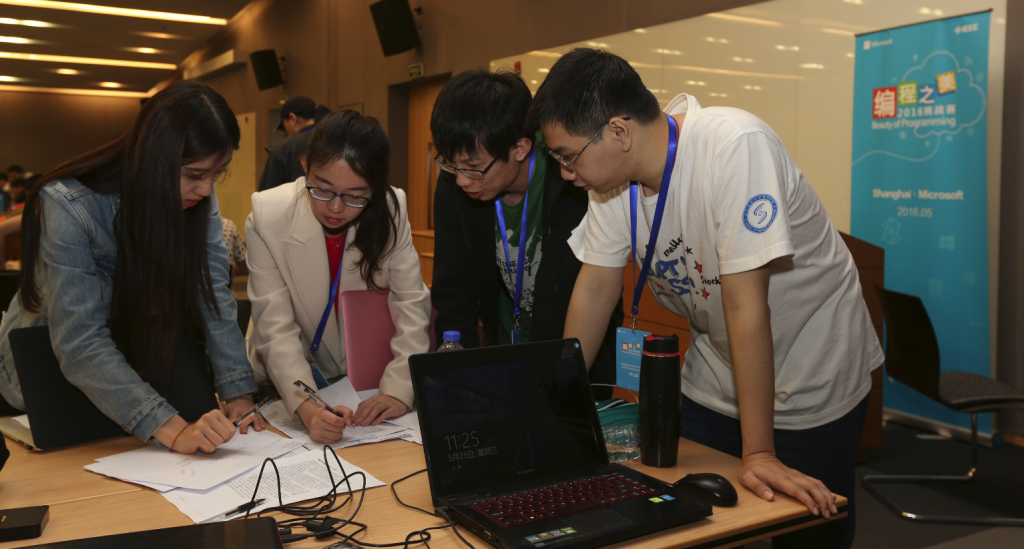 Fu and her team chose “Perform a massive academic data analysis and visualization” as competition problem, and designed a product called Fig-Words Academic, which placed second in BoP 2016. Users enter keywords they want to search for in the system, based on their needs: analysis of a

The project Fig-Words Academic, which placed second in BoP 2016.

dissertation proposal, an academic search, published periodical meetings search, or author search. The system generates the association and provides feedback to users about the heat of keywords and the number of searches, which visually helps users finish entering the remaining content and reduce ambiguity. After searching for results, the system sorts the page layout planning according to the category that the keywords belong to, and displays content that best meets users’ needs, which will help users make their decisions intuitively and accurately. The system will generate a corresponding analysis report to give the user feedback.

The winners of BoP 2016 were an outstanding team of four who won for their project, Percepicture. With the topic of “Build a smart family e-album,” their creation targets scenarios such as exhibitions, household use, and travel. Percepicture allows users to perform operations—rotating a picture or turning pages, for example—with gestures instead of touching the screen. 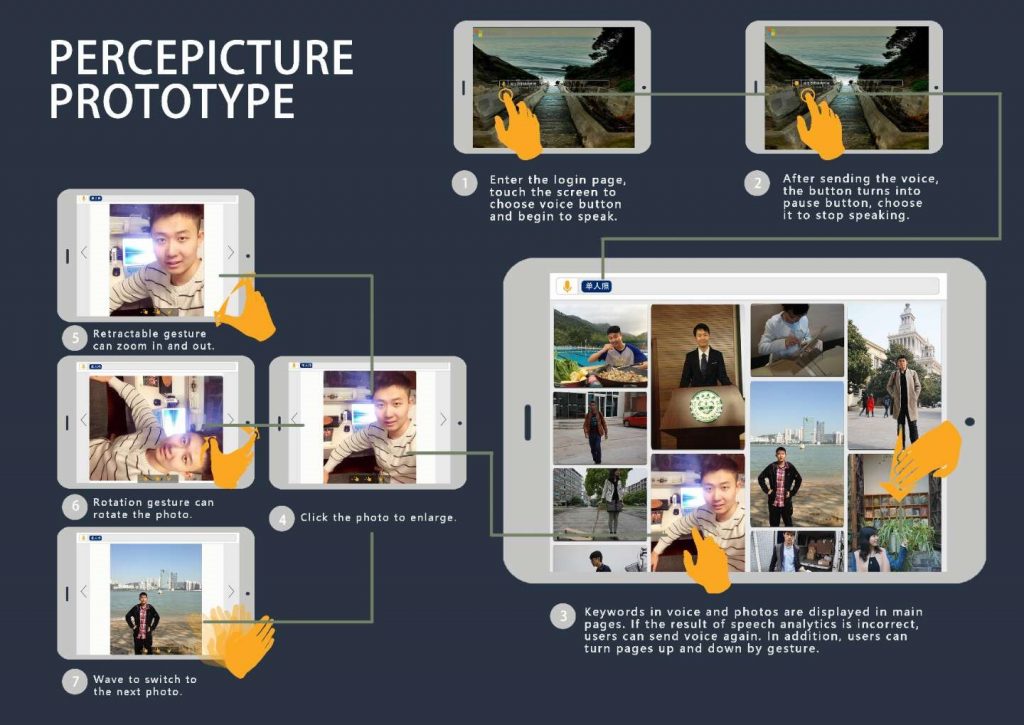 The design of Percepicture makes full use of the Microsoft Cognitive Services API. Based on a front-end Python server, the Percepicture system searches photos using voice, and turns the user’s speech into intention through the Cognitive Services speech recognition API and language understanding intelligence service API (LUIS). Photos in a photo gallery are preprocessed with APIs, and their characteristics are abstracted. The system can access photos needed by matching the user’s intention with characteristics in the photo gallery. Percepiture also addresses keyword matching through the competitors’ innovative use of the depth learning model word2vec. They trained the photos’ label corpus, mapping the words into high dimension vector space, which transformed the word matching into a mathematical vector similarity calculation. In the age of big data, this use extends not only the range but also the depth of searching, which leads to greater accuracy of searches.

A great addition to the Beauty of Programming competition this year was the Ada Prize, an award specifically meant to encourage female students by noting their excellent performance. Named for Ada Lovelace (daughter of the famous British poet Lord Byron), who is considered by many to be the first programmer, the honor was given to Kun Yin, a female member of the BoP winning team. 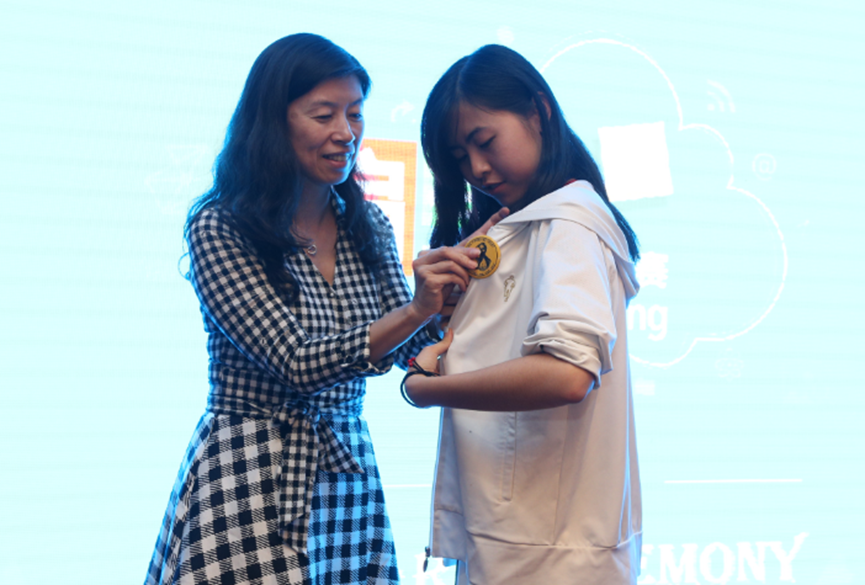 As it has in previous years, the Beauty of Programming competition met an important goal, affording young people a chance to experience what it’s like to integrate their creativity with expertise and programming skills. We hope all of the competitors go on to use their abilities to empower people by removing obstacles to efficient communication, by improving people’s daily lives, and by doing so creating a better world to live in. This is the beauty of programming. 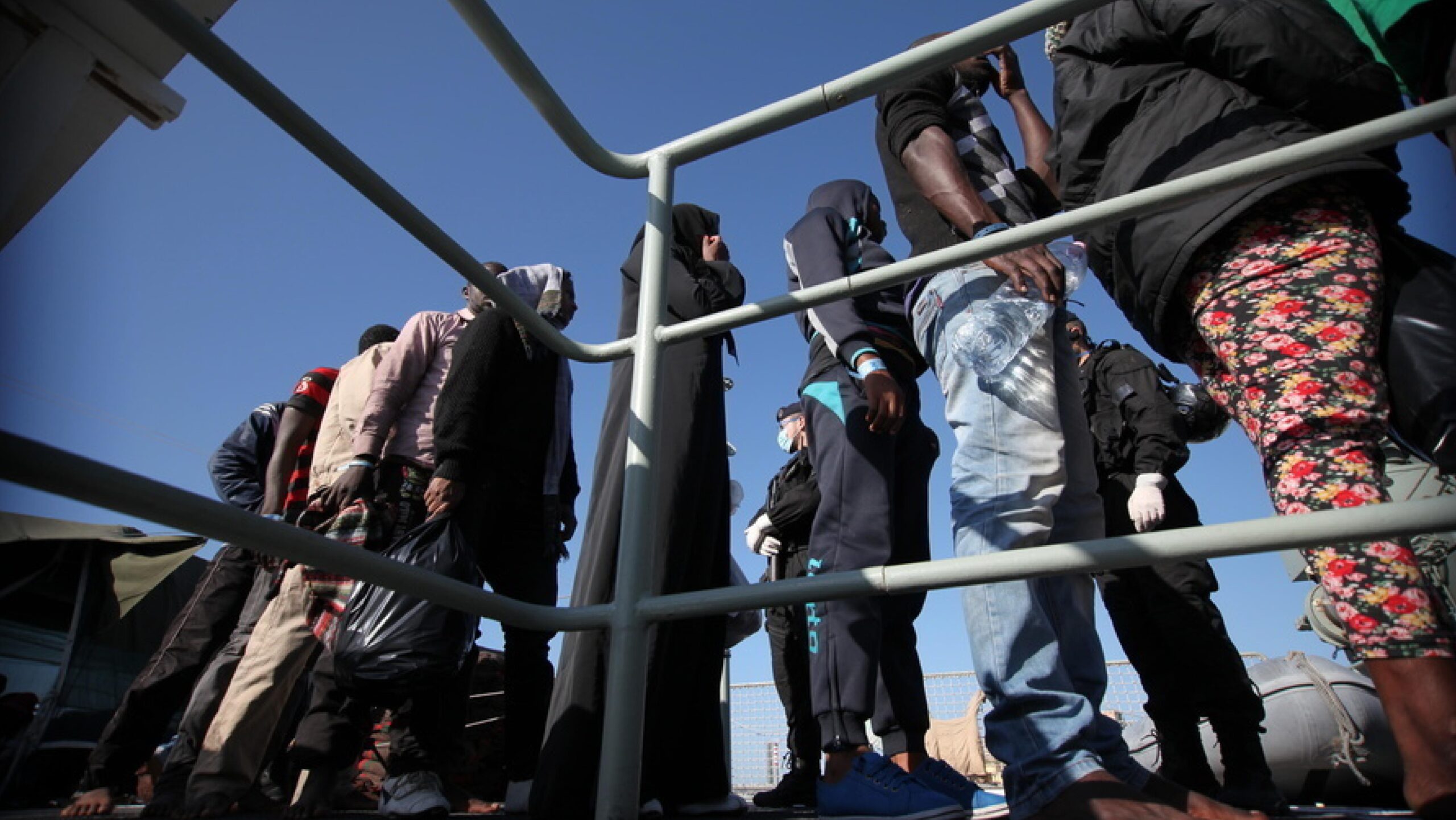