Interpreting visual art with sound for a more inclusive experience 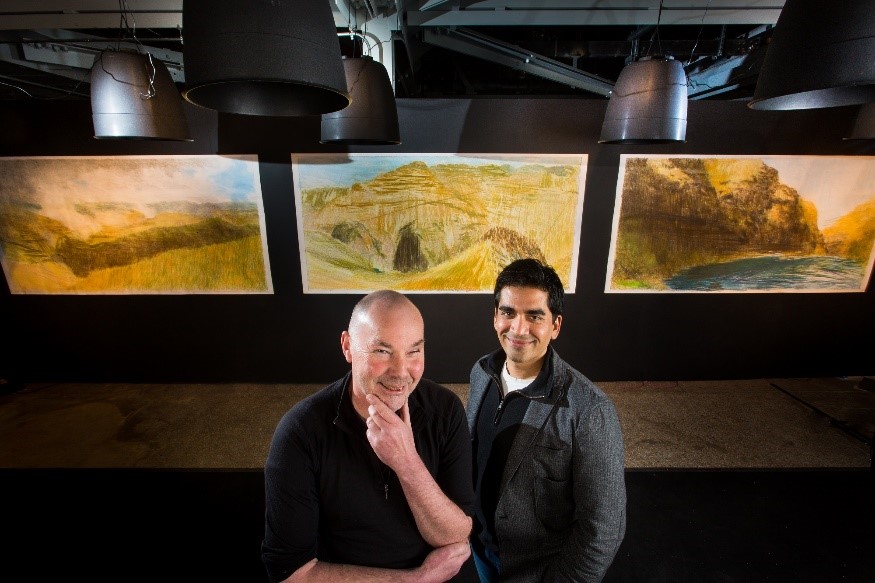 A well-known Scottish landscape painter, Keith Salmon creates ethereal, moody abstracts of skylines and mountains inspired by the rugged highlands in his country. Trained in fine arts and sculpture, Salmon has broadened his techniques over the years as his eyesight has diminished, learning how to smash paint into texture and scratch pastels for scribbles to evoke less a depiction of place and more an exquisite experience of the wild.

Last month, Salmon, who is legally blind, debuted an installation with innovative research from Microsoft that enriches his art even more, with proxemic audio to interpret two-dimensional images. Called “The Oregon Project,” it uses four Kinects, 15 overhead speakers and 54 soundtracks to produce an acoustic and spatial interpretation of three drawings Salmon did of the beautifully remote Hells Canyon area in Oregon. The installation premiered in Seattle at the 9e2 exhibit of art and technology as a powerful new way for Salmon to create and for people with low vision to experience and enjoy visual art.

“It would be great to think that in a few years, you might go to a national museum or art gallery and this technology would be there as part of the experience,” says Salmon, who began to lose his sight in the ‘80s due to diabetic retinopathy. With his sight limited to a small amount of vision in one eye for many years, he’s been able to adapt, paint and hike with his partner Anita Groves as his guide. You can watch the video with audio-description here.

In front of each drawing is a 3D space containing 18 soundtracks that can be played. The Kinects track movement to trigger different sounds, making the art lively and interactive for people with and without vision. From afar, observers can hear birdsong, rushing water and grass swishing in the wind — recorded in Hells Canyon by Salmon and his collaborators.

Moving closer activates digital tones matched to Salmon’s palette of blue, green, brown and ochre. Stand even closer and you can hear Salmon working in his studio as he scribbles pastels on paper, in an experience that parallels how a sighted person can see details when leaning in. The Kinects also track hand waves to change what you hear, helping observers become part of the piece and make their own acoustic mixes with movement. At the exhibit, adults triggered sounds primarily by walking, while kids jumped and waved their arms to produce a different blend of noise.

“As a way of moving from an outer to inner layer to the drawings, natural sounds to industrial sounds works really well,” Salmon says. “It has a wonderful, atmospheric, spacey, landscape-y feel that pulls the whole thing together.”

Many museums offer experiences for people with visual impairment, from detailed audio descriptions of art to special events where people can touch sculptures with gloved hands. But the researchers wanted to create a more personalized experience that was still communal, and something less directed and curated by docents.

After exploring different ideas, they decided to create a Kinect-enabled sound system based on proxemics, the study of how people use space to define social interactions. And they wanted sound and visuals to be equally aesthetic and important, and rejected anything that felt like a “bolted-on” accessibility tool.

“Visual exploration is a personal experience and is based on distance — as I get closer, I see different types of details — so we wanted to mimic those ideas in audio,” says Joshi, who specializes in computer vision and computational photography. He’s also a painter and interactive-installation artist involved in the local arts community. 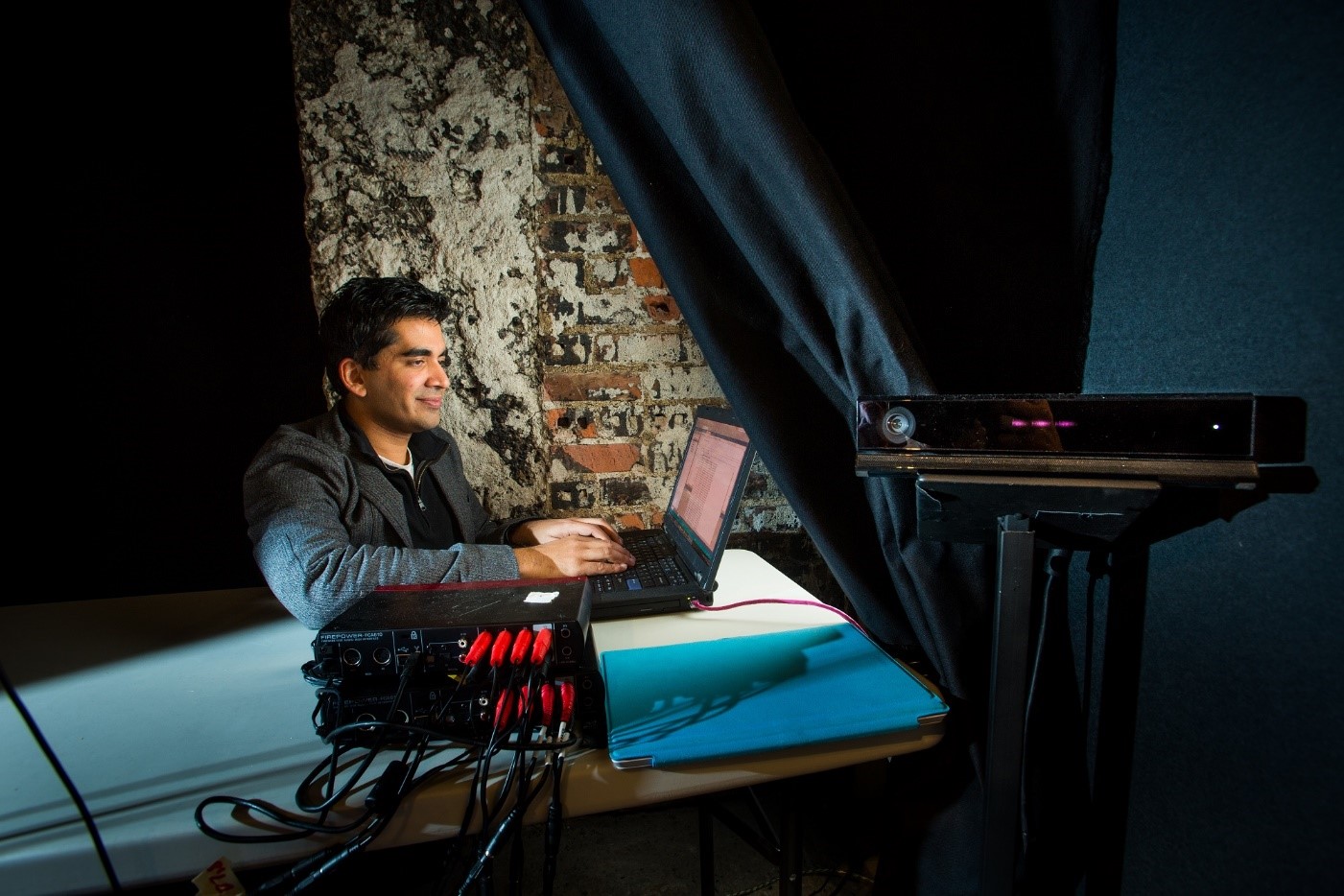 Last year, researchers invited people with low vision to test a prototype built with programmed music, narration and sounds acoustically interpreting paintings by Frida Kahlo, Henri Matisse and others. The testers overwhelmingly enjoyed the experience, and one woman, an art lover who had stopped going to galleries after losing her sight, cried in joy. But the team knew the system wasn’t “art.” They knew they needed to do more.

Connecting with local artists, Joshi began working with Salmon to create a new piece with Salmon’s art and Microsoft research. They collaborated with Seattle filmmaker and photographer Dan Thornton, Scottish sound engineer Graham Byron and 9e2 organizer John Boylan to display it at the nine-day 9e2 event of installations and performances on art, science and technology. Although this particular project has been experimental and there are no immediate plans to make this specific system available broadly to the public, researchers have filed a patent for Eyes-Free Art and hope to continue building more accessible, artistic experiences.

Amos Miller, a Microsoft researcher with visual impairment who works with the company’s Accessibility group, calls the installation “inherently inclusive,” allowing him and others to experience art personally and socially, and in the way the artist intended.

“It’s evidence that you can create really positive, inclusive experiences,” says Miller, who is part of the Cities Unlocked project, which creates 3D soundscapes to help people with low vision navigate their surroundings.

For Sheri Richardson, president of Seattle advocacy group Vision Loss Connections and blind since infancy, the installation was a vibrant, sensory way to explore art from different perspectives and not rely on someone else’s interpretation. She especially liked being able to visualize the artist in the mountains with sounds from Hells Canyon.

“The technology of the Kinects and the sound moving with you as you move into the paintings really makes it experiential and brings out the emotions,” says Richardson. 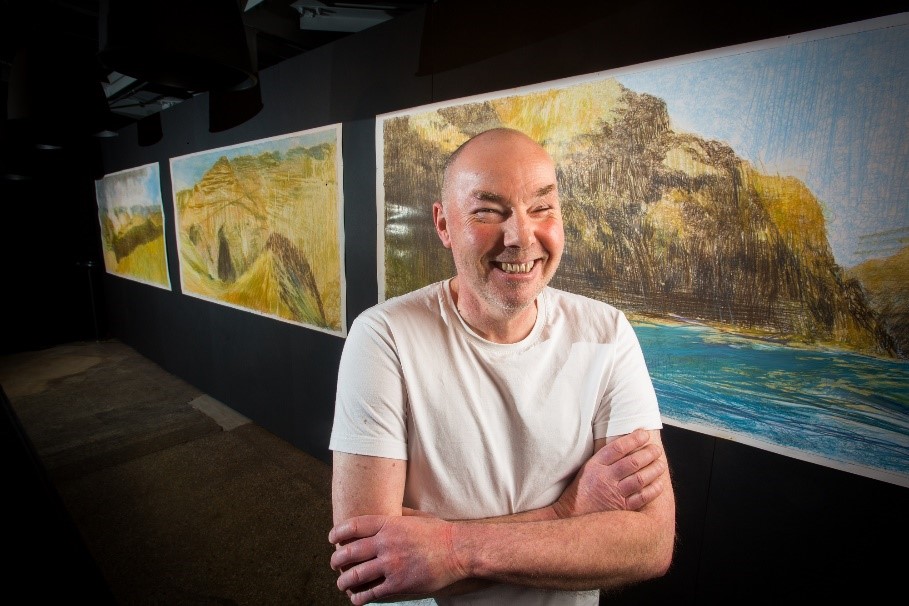 For Salmon, whose limited vision began to further deteriorate a few years ago, Eyes-Free Art has given him hope to continue his artistic career for many more years.

“It’s been amazing,” he says. “I’ve now got a future. If my sight carries on getting worse, I can continue making art and draw with sound. It’s a case of learning and adapting.”

“The Oregon Project” will be on display at the Tent Gallery at the Edinburgh College of Art in Scotland in April of 2017. 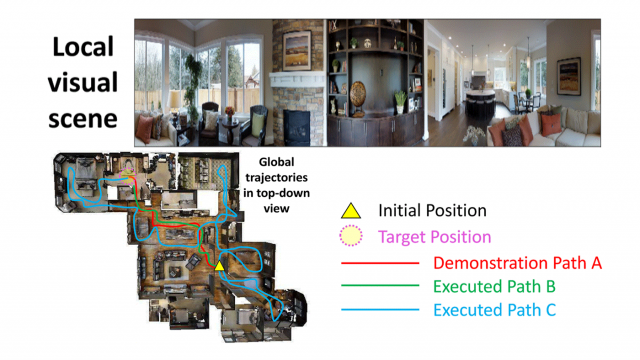 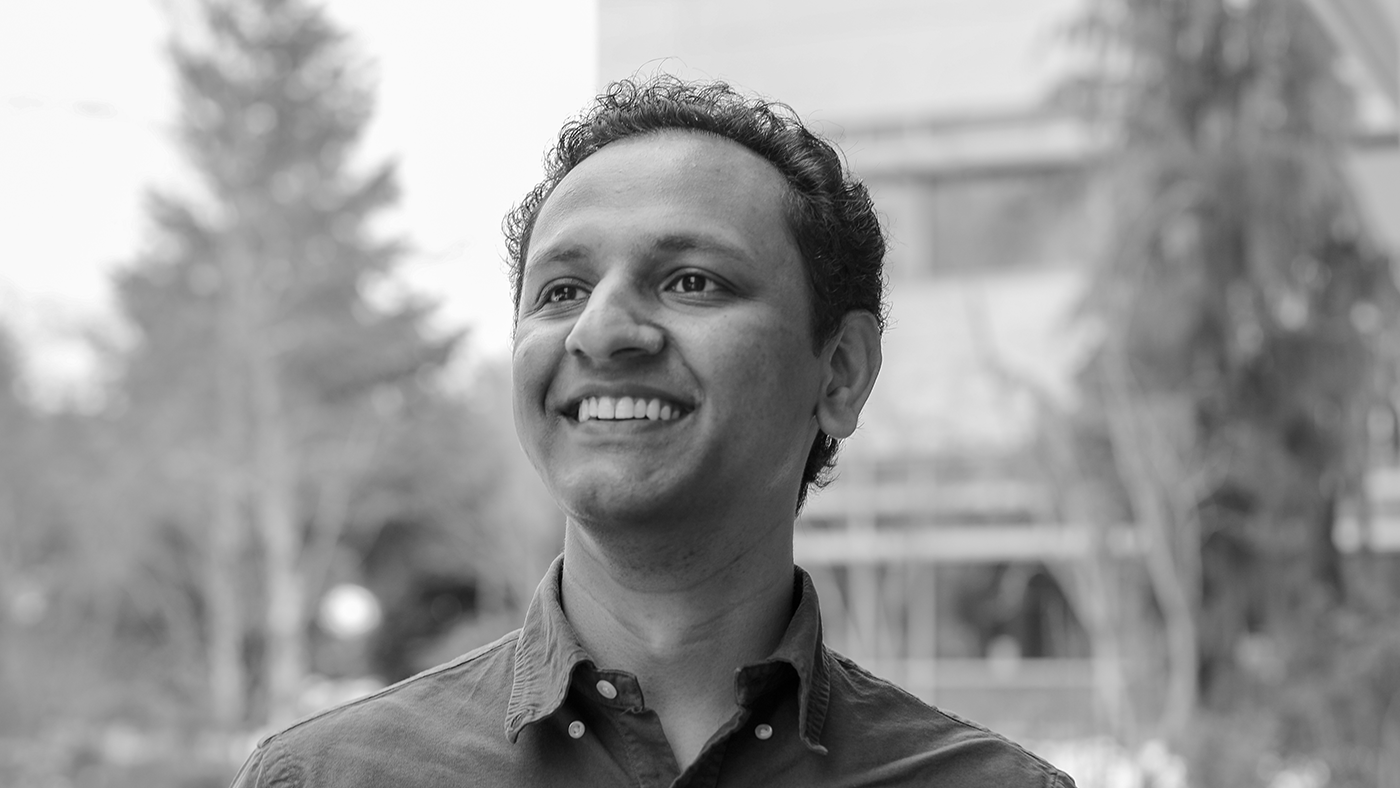 Audio and Acoustics, Graphics and multimedia

Project Triton and the physics of sound with Dr. Nikunj Raghuvanshi

Episode 68, March 20, 2019 - Today, Dr. Raghuvanshi talks about the unique challenges of simulating realistic sound on a budget (both money and CPU), explains how classic ideas in concert hall acoustics need a fresh take for complex games like Gears of War, reveals the computational secret sauce you need to deliver the right sound at the right time, and tells us about Project Triton, an acoustic system that models how real sound waves behave in 3-D game environments to makes us believe with our ears as well as our eyes. 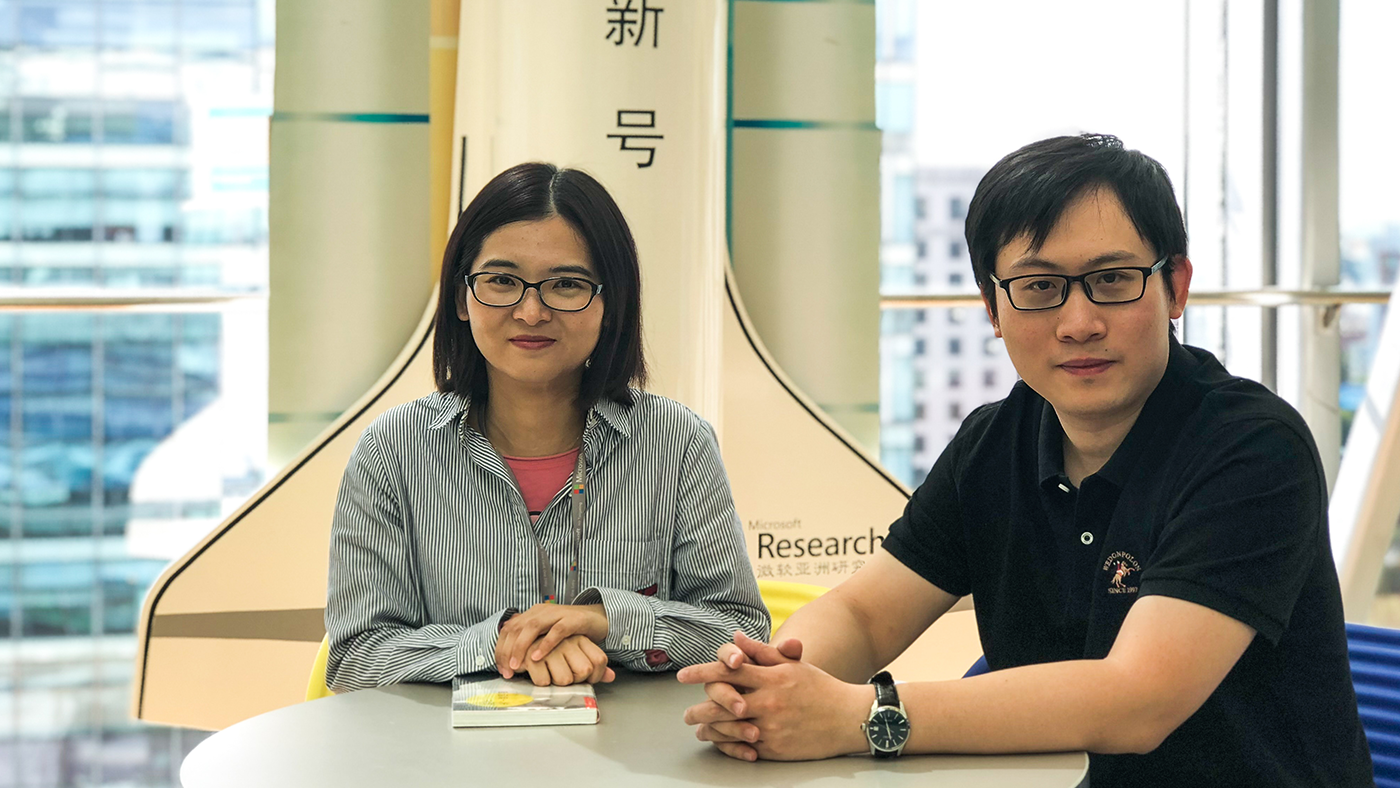 The poet in the machine: Auto-generation of poetry directly from images through multi-adversarial training – and a little inspiration

As the means of expressing thoughts and feelings too sublime and elusive to be conveyed in everyday language, poetry across all cultures occupies a most sophisticated and mysterious of realms, just beyond the outskirts of creativity. Along the language-based avenues of expression available to people, poetry represents a departure from casual speech; few possess the […]

The Oregon Project is an installation by Artists Keith Salmon, Daniel Thornton, Graham Byron, and Microsoft Researcher Neel Joshi. It provides alternative insight and exploration of a landscape for those with limited sight and is centered around three new large…

We create technology innovations that improve the lives of people with disabilities. As part of this effort, we embrace the concept of universal design, where we aim to bring new experiences to all users with our technologies.

In the Microsoft Research Redmond Lab, we are constantly fusing art, technology and science to address crucial issues like climate change, pollution exposure, emotional health, and so many other challenges facing society.