Modern machine learning models are known to fail in ways that aren’t anticipated during training these models. These include all sorts of distribution shifts that the model might experience during deployment in complex real-life settings. In the context of computer vision for example, it has been shown by several works that models suffer in the face of small rotations, common corruptions (such as snow or fog), and changes to the data collection pipeline. While such brittleness is widespread, it is often hard to understand its root causes, or even to characterize the precise situations in which this unintended behavior arises.

How do we then comprehensively diagnose model failure modes? One way to do this is to deploy our models in the real-world and eventually collect some real-world failure cases. But clearly the stakes are often too high to simply do this. There has been a line of work in computer vision research that is focused on identifying systematic sources of model failure: which include examining the effects of unfamiliar object orientations, misleading backgrounds, or conflicts between texture and shape. Such analyses have revealed patterns of performance degradation in vision models – still, each such analysis requires its own set of (often complex) tools, time, and effort. Our question is thus: can we support reliable discovery of model failures in a systematic, automated, and unified way?

In our latest work, in collaboration with MIT, we introduce 3Debugger (3DB): a framework for automatically identifying and analyzing the failure modes of computer vision models. This framework makes use of a 3D simulator to render images of near-realistic scenes that can be fed into any computer vision system. Users can specify a set of extendable and composable transformations within the scene, such as pose changes, background changes, or camera effects, which we refer to as “controls”. We show examples of such controls in Fig. 1.

Fig. 1: Examples of “controls” in 3DB, using Blender as the 3D simulator.

Once the user has specified a set of controls of interest, the system performs a guided search, evaluation, and aggregation derived from these transformations. 3DB achieves this by instantiating and rendering a myriad of object configurations according to the transformations, records the behavior of the model on each rendered scene, and finally presents the user with an interactive, user-friendly summary of the model’s performance and vulnerabilities. 3DB is general enough to enable users to, with little-to-no effort, re-discover insights from prior work on robustness to pose, background, and texture, among others. Users can even compose these transformations to understand their interplay, while still being able to disentangle their individual effects, or easily write their own if required. An overview of the workflow of 3DB is shown in Fig. 2.

For example, when diagnosing an ImageNet-pretrained ResNet-18 model, 3DB is capable of finding failure modes (e.g. due to extreme viewpoints and poses) in simulation that transfer to the real world. This is demonstrated in Fig. 3 which shows the agreement, in terms of model correctness, between the model predictions within 3DB and its predictions in the real-world. For each object, we selected five rendered scenes found by 3DB that were correctly classified in simulation, and five that were misclassified; we recreated and deployed the model on each scene in the physical world. The positive (resp., negative) predictive value is the rate at which correctly (resp.  incorrectly) classified examples in simulation were also correctly (resp., incorrectly) classified in the physical world. 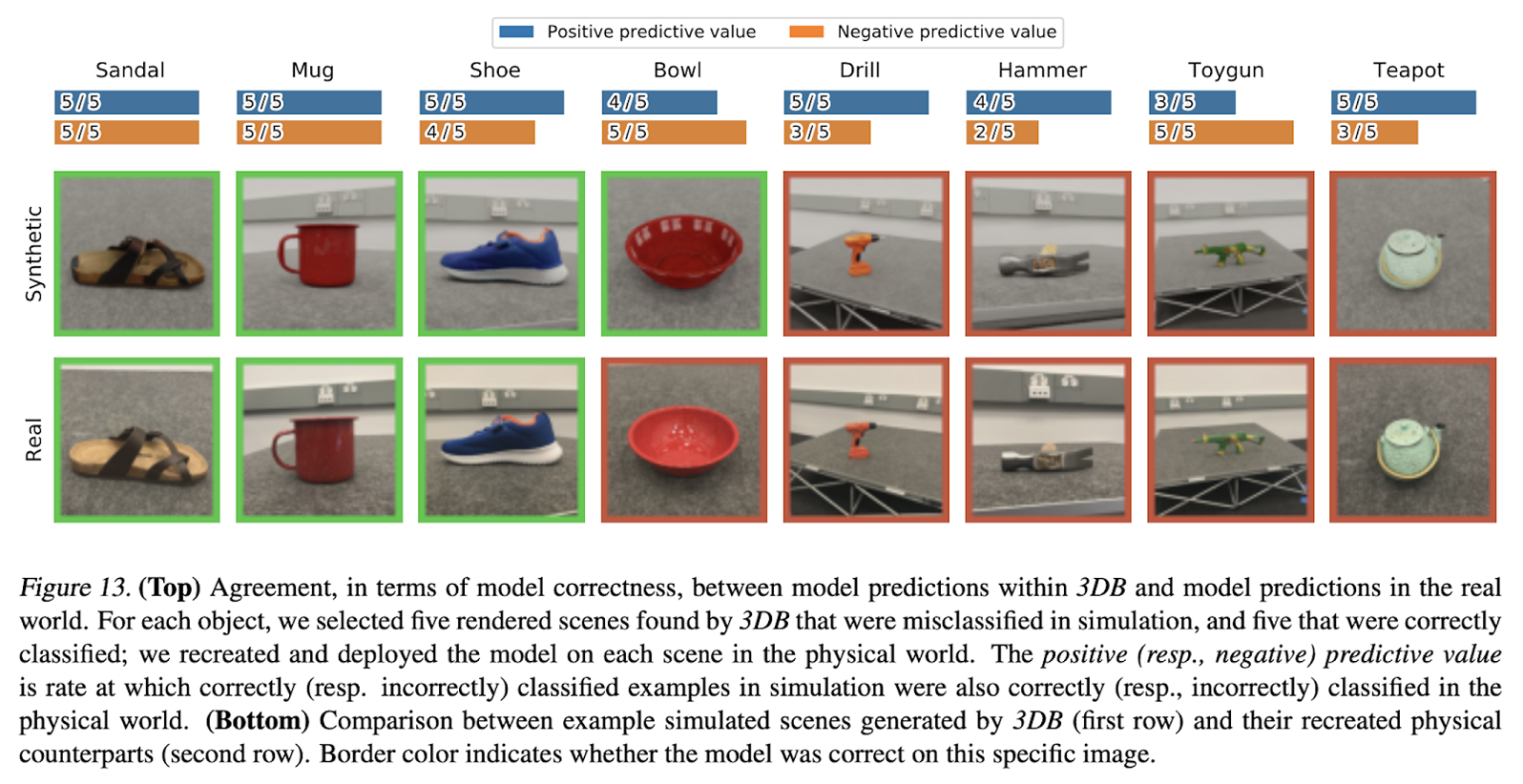 Overall, 3DB is a scalable, extendable, and unified framework for diagnosing failure modes in vision models using high-fidelity rendering. We refer the reader for our paper to learn more about the use cases of 3DB, where we demonstrated the efficacy of 3DB by applying it to a variety of use cases including disentangling the effects of different types of brittleness, discovering model biases, analyzing specific model decisions in depth, and identifying vulnerabilities and worst-case environmental configurations. We are releasing 3DB as a library alongside a set of example analyses, guides and documentation. 3DB is designed with extensibility as a priority; we encourage the community to build upon the framework by adding more controls and policies that provide new insights into the vulnerabilities of vision models.