Published by ACM | Organized by ACM 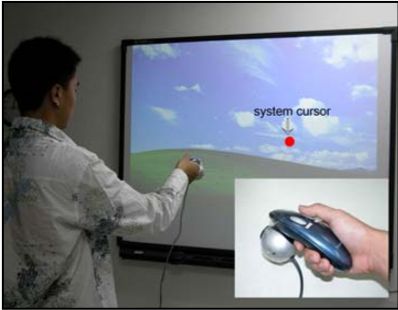 This paper describes the design and evaluation of a technique, Direct Pointer, that enables users to interact intuitively with large displays using cameras equipped on handheld devices, such as mobile phones and personal digital assistant (PDA). In contrast to many existing interaction methods that attempt to address the same problem, ours offers direct manipulation of the pointer position with continuous visual feedback. The primary advantage of this technique is that it only requires equipment that is readily available: an electronic display, a handheld digital camera, and a connection between the two. No special visual markers in the display content are needed, nor are fixed cameras pointing at the display. We evaluated the performance of Direct Pointer as an interaction product, showing that it performs as well as comparable techniques that require more sophisticated equipment.