Translator and Speech services, part of the Cognitive Services collection of APIs, are machine translation services from Microsoft.

Translator has been used by Microsoft groups since 2007 and is available as an API for customers since 2011. Translator is used extensively within Microsoft. It is incorporated across product localization, support, and online communication teams. This same service is also accessible, at no additional cost, from within familiar Microsoft products such as Bing, Cortana, Microsoft Edge, Office, SharePoint, Skype, and Yammer.

Translator can be used in web or client applications on any hardware platform and with any operating system to perform language translation and other language-related operations such as language detection, text to speech, or dictionary.

The Translator service is an Azure service hosted in Microsoft data centers and benefits from the security, scalability, reliability, and nonstop availability that other Microsoft cloud services also receive.

Translator’s implementation of Statistical Machine Translation (SMT) is built on more than a decade of natural-language research at Microsoft. Rather than writing hand-crafted rules to translate between languages, modern translation systems approach translation as a problem of learning the transformation of text between languages from existing human translations and leveraging recent advances in applied statistics and machine learning.

So-called “parallel corpora” act as a modern Rosetta Stone in massive proportions, providing word, phrase, and idiomatic translations in context for many language pairs and domains. Statistical modeling techniques and efficient algorithms help the computer address the problem of decipherment (detecting the correspondences between source and target language in the training data) and decoding (finding the best translation of a new input sentence). Translator unites the power of statistical methods with linguistic information to produce models that generalize better and lead to more comprehensible translations.

Continuous improvements to translation are important. However, performance improvements have plateaued with SMT technology since the mid-2010s. By leveraging the scale and power of Microsoft’s AI supercomputer, specifically the Microsoft Cognitive Toolkit, Translator now offers neural network (LSTM) based translation that enables a new decade of translation quality improvement.

These neural network models are available for all speech languages through Speech service on Azure and through the text API by using the ‘generalnn’ category ID. 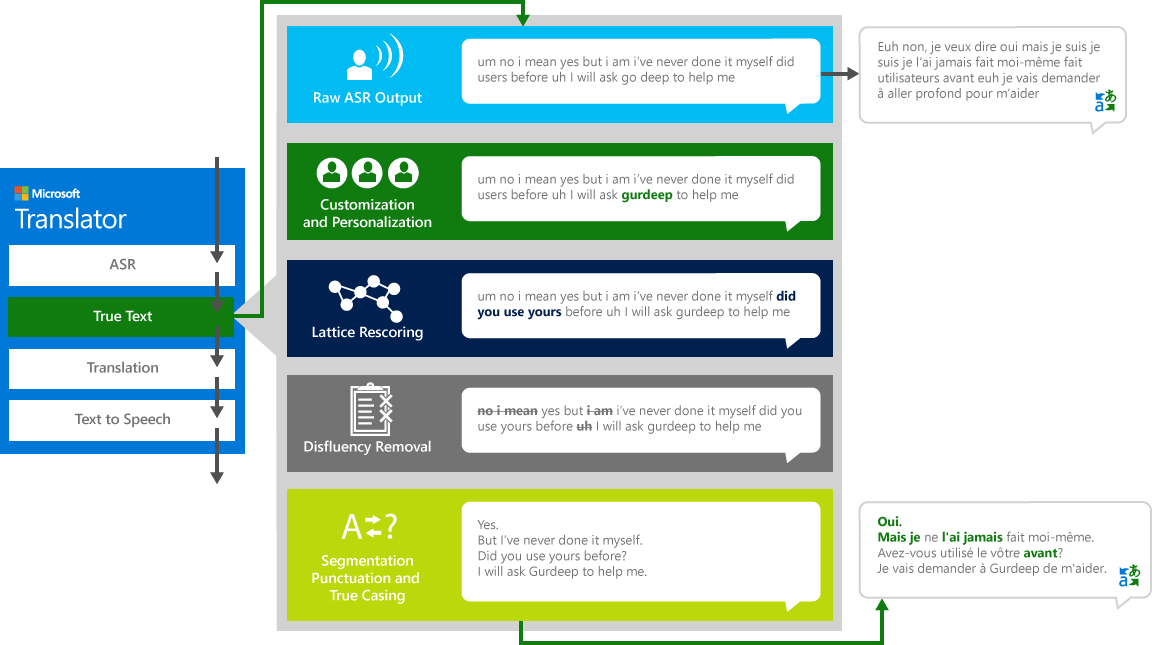 Translation
The text is then translated into any of the languages and dialects supported by Translator.